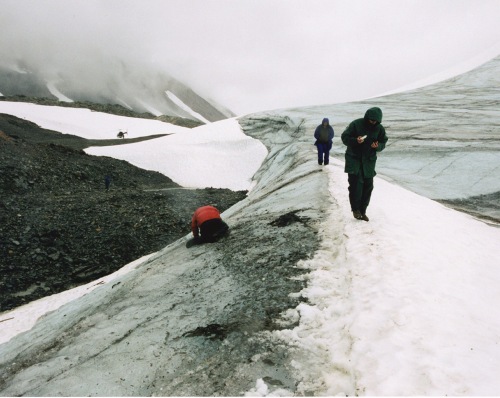 View of the glacial edge high in the Tatsenshini where Kwäday Dän Ts’ìnchi was found in 1999. Photo credit: Al Mackie

I don’t usually plug public talks in cities that don’t contain the Shining Tower of Blog HQ, but I’m making an exception for this one.  BlogBrother Alexander and BlogSisterInLaw Kjerstin are speaking on Tuesday evening in Portland on the topic of “The Kwädąy Dän Ts’ìnchį Project, a Collaborative Study of a Man Frozen in a Glacier and His Belongings.”

END_OF_DOCUMENT_TOKEN_TO_BE_REPLACED 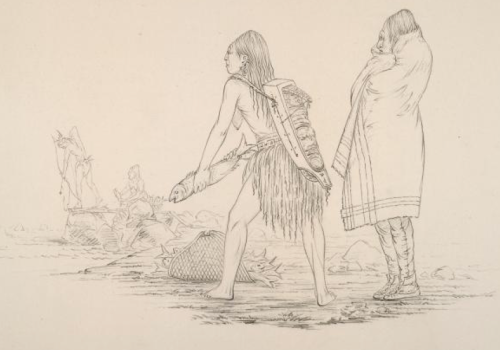 I’m probably the last person to get the memo that you can fire a harpoon with a bow and arrow.  In fact,  I only just got my head around firing a harpoon with an atlatl.  Anyway, take a squint at the picture above – the figure in the lower left background is clearly shooting a harpoon-arrow from his bow.  The picture is from about 1850 and is a pencil drawing of a scene at The Dalles, on the Columbia River.  I’ll take a closer look at this picture below. END_OF_DOCUMENT_TOKEN_TO_BE_REPLACED 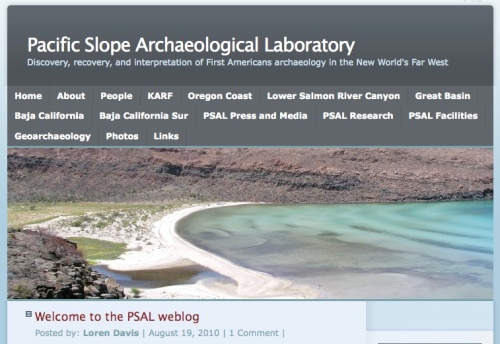 It looks like big Northwest Coast projects on old sites are in the works at Oregon State University.  I came across a new blog which is the public face of something called the Pacific Slope Archaeological Lab with the mission of “Discovery, recovery, and interpretation of First Americans archaeology in the New World’s Far West.”  The blog points to a large number of projects which have been initiated or are planned under this research umbrella.  How is such a wide-ranging and ambitious research project possible?  A million dollar endowment making a fund under the direction of OSU Associate Professor Loren Davis isn’t hurting.

END_OF_DOCUMENT_TOKEN_TO_BE_REPLACED 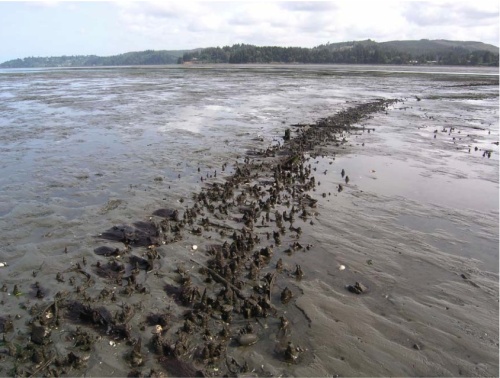 (edit: I completely stupidly mixed up who did the poster under discussion. Apologies all around, fixed the text below)

I mentioned the Wetland Archaeology Research Project (WARP) and their revamped website once before in reference to Nancy Greene’s pioneering fishtrap work at Comox.  I’m glad to see they have another interesting conference-style poster available for download, this one by Robert Losey (now at the University of Alberta) Scott Byram on the topic of Oregon fish weirs in unusual settings (PDF).

If a cow patch strikes you as an unusual setting, of course.

END_OF_DOCUMENT_TOKEN_TO_BE_REPLACED 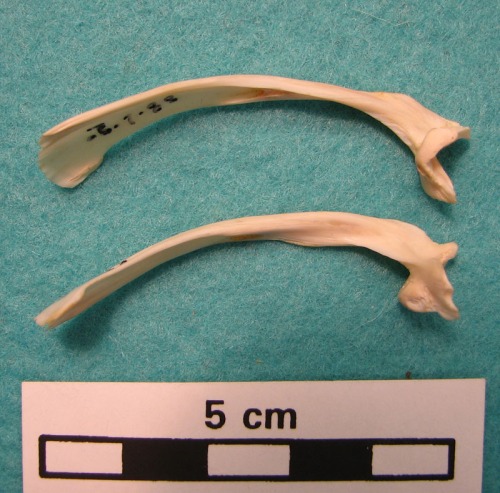 OK, I have written more exciting headlines in my life.  But as I noted before, zooarchaeologists – the specialists in identifying and interpreting animal remains – are some of the unsung heroes of archaeology.  The discipline requires encyclopedic knowledge of hundreds of animal skeletons,  the ability to relate even small fragments from archaeological contexts back to whole specimens of known species, and a thorough understanding of both culture and ecology – all this in addition to the normal skill set of a typical archaeologist.  Master all this, and your reward is to be called “Bone Guy” (or worse) for the rest of your professional life.

Anyway, it is welcome to find another online guide to some common archaeological animal remains from the Northwest.  While I know it is a bit too much information for many readers of this web site, it is important to share the link and information, since considerable time and effort was put into this admittedly niche set of illustrated fish bones, and archaeologists need to be aware of it.

END_OF_DOCUMENT_TOKEN_TO_BE_REPLACED

I often use eulachon (Thaleichthys pacificus, a small, anadramous smelt) as an example of “archaeologically-invisible” food. They are also known as “candlefish”, on account of being so oily that a wick jammed down their throat will burn like a candle.

These small fish run by the millions up rivers to spawn, where they could be intercepted.   Traditionally, many or most eulachon would be processed into eulachon oil, or grease: a highly nutritious, calorie-dense substance that preserved very well and could also be used to preserve other foods such as berries.  The means of processing was to put them into a large container, perhaps an old canoe, known colloquially as a “stink box”, let them “rest” there for a week, and then heat them up, enabling the oil to rise and then be skimmed off, or pressed out.  The residue (bones, guts, brains, etc.) would then be returned to the river and few or no bones would make it away from the processing site.  In this way, eulachon provided a staple food, a nutritional supplement, a means of preservation, and an extremely valuable trade item – when Alexander Mackenzie arrived near Bella Coola in 1793, “Over Land, From Canada”, he did so on one of the well-worn grease trails that linked coast to interior. Since the fish arrive in the early Spring, they were hailed as starvation busters in lean years.  Nonetheless, archaeologically they are almost invisible, relative to their importance. 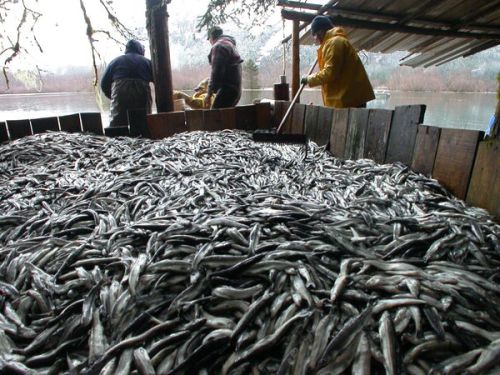 It is therefore sobering to read that U.S. President Obama has listed the Columbia River eulachon as an endangered species: eulachon are becoming almost invisible relative to the real world now, it seems.

END_OF_DOCUMENT_TOKEN_TO_BE_REPLACED 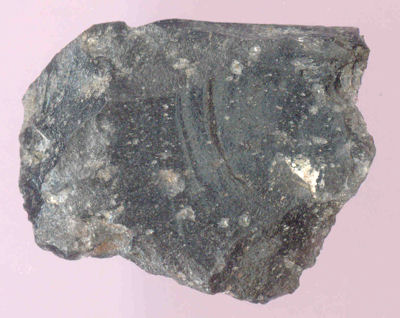 A flake of obsidian from DhRr-18, southern British Columbia. This visually-distinctive glass is from the Mount Garibaldi obsidian source.

Obsidian is a kind of volcanic glass and was highly prized for making certain kinds of stone tools.  Obsidian forms at places of relatively small outflows of magma, or liquid rock.  Small flows can cool quickly, which allows the formation of a glassy crystalline structure ideal for stone tool manufacture.  Small flows also represent a small sample of well-mixed magma, and thus each little patch of obsidian may share a very distinctive chemical signature.  This signature, usually identified by trace elements such as Strontium, Zirconium, Yttrium and Rubidium, then allows for the chemical fingerprinting of each source.  Any obsidian artifact found, whether at a source or not, can also be “fingerprinted” and then compared to a catalogue of known obsidian ources.  Since the artifacts don’t move around on their own but only through the agency of humans, the distribution of obsidian artifacts is a proxy measure for the movement and interaction of people.  When you have hundreds or thousands of such artifacts and a large database of known sources, then you can start to see large scale, long-term social interaction emerge from the silent archaeological record.  Most obsidian isn’t visually distinctive enough to sort out by eye alone, so these geochemical methods are essential.

So far, so Archaeology 101.  I was really happy to find that Oregon’s Northwest Research Obsidian Studies Laboratory has a web site not which not only solicits business, but is a highly educational and informative site about many aspects of obsidian analysis, with a focus on the Northwest. END_OF_DOCUMENT_TOKEN_TO_BE_REPLACED

Oregon: Where Past is Present 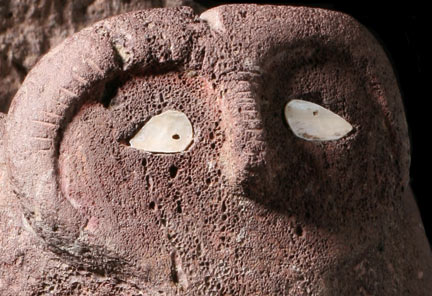 The Oregon Museum of Natural and Cultural History has some very nice exhibits and it looks like their underlying collections are superb.  Their online photo-gallery “Oregon: Where Past is Present” is some pretty nice eye-candy, though I would love to see them give a little more information about each piece.  The sculptural lamp above is simply superb. 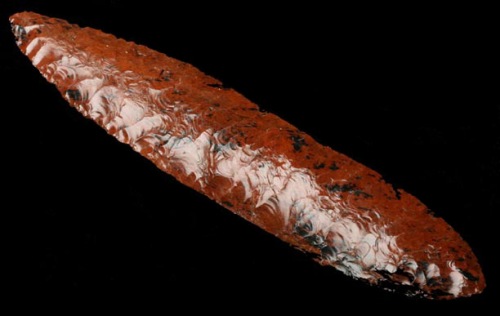 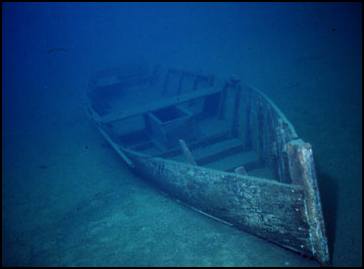 The US National Parks Service has a useful page summarizing policies and laws regarding “submerged resources” – which includes underwater archaeological sites.  The sections most of interest to the six readers of this blog are probably the pages on Washington State, Alaska, Oregon and California — though the fact that Idaho has a page is, at least, surprising until you remember the importance of paddle-wheelers in the earlier interior historical period all over the west. 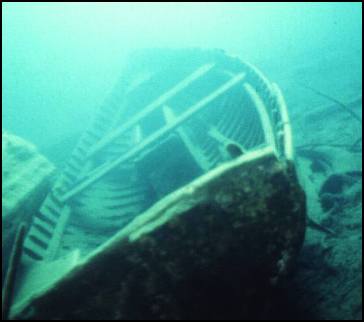 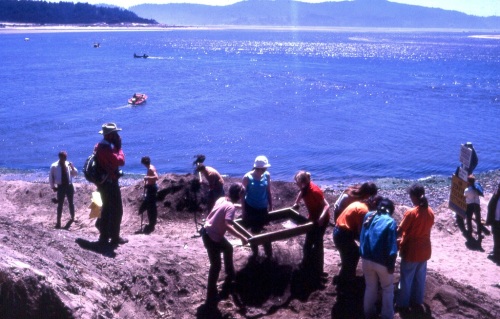 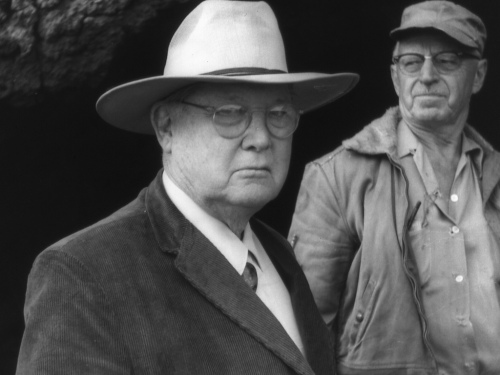 Erle Stanley Gardner, the author of the Perry Mason mysteries and many other books, and Luther Cressman, pioneering archaeologist and ex-husband of Margaret Mead, at Fort Rock Cave in 1966.