Photos of Victoria and Esquimalt, 1859 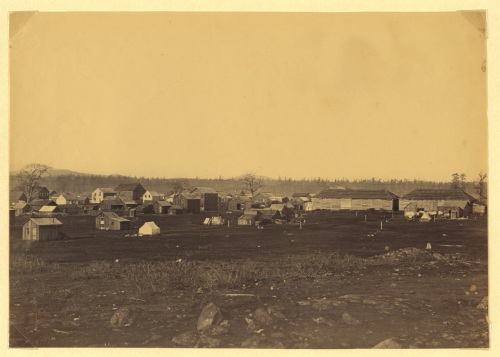 In 1846, the Oregon Treaty established the boundary between British and American territory west of the Rockies (and unintentionally established the benchmark date for whether archaeological sites are automatically protected under the Heritage Conservation Act, but that’s another story).  Vancouver Island was to remain in British hands in its entirety, but otherwise the 49th parallel was to be the boundary on land.  The ocean boundary through the Salish Sea was resolved later, after the armed standoff on San Juan Island known as the “Pig War“.   An International Boundary Commission was struck, with the mandate of surveying the 49th parallel and one of its base camp headquarters in 1858 and 1859 was Esquimalt.  At this time, a series of photographs of the young Fort Victoria and surrounding buildings were taken, some of the earliest photographs from British Columbia I know of – including some remarkable pictures of First Nations people. 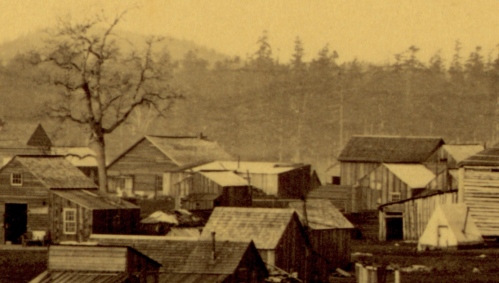 The American Library of Congress has some of these online.  Notably, since I often complain about the poor resolution offered by many public institutions, you can download 600 dpi TIFF files of these, which amount to 50 to 150 megs each.  Well, I couldn’t resist, and the detail is excellent.  Note the little tent above in the detail from the top picture, with its crooked chimney – cute!.  Also note the tall, crowned, Savannah-style Garry Oaks – these only grow in this shape when the surrounding vegetation is kept down.  This presumably reveals downtown Victoria’s former landscape: camas meadow, tended through fire and the suppression of brush. In the pictures, you can see scenes such as graceful canoes mingling with European boats across mudflats which may be “James Bay” (you’ll need to download the TIFF file for that one).  More historically-minded people than myself can probably pick out a lot of landmarks: it is striking how unfamiliar everything looks, such as this overview of Victoria Harbour..  Of the photos, a few show Esquimalt, and six appear to be a panorama of Fort Victoria and its neighbourhood, which could be stitched together.

The most remarkable to me are the three below, apparently pages from a Boundary Commission photo album, showing “Indians of Vancouver Island”.  Dating to before 1860, these must be among the very earliest photographs of aboriginal people in BC, and of the Songhees and Esquimalt nations in particular.  Again, the detail is excellent if you download the TIFF.

It’s a shame the Provincial Archives doesn’t offer these pictures to the people of BC – they do have a few boundary commission pictures but the resolution is very poor indeed.  I’m glad these early pictures of the Provincial Capital and its original inhabitants are online at the excellent Library of Congress digital archive site, but not so happy we need to go to an American public institution to get them. Either way, they have a lot to offer historians, archaeologists and historical ecologists alike.

"Small northern canoe, Vancouver Island - douglas firs in the background" ca. 1859. Another photo places this at the Officer's Quarters of the Boundary Commission, in Esquimalt. Some of the best lines you will ever see on a NWC canoe. Source: LOC.

4 responses to “Photos of Victoria and Esquimalt, 1859”