As its site number indicates, it’s the first site recorded by archaeologists in Whatcom County – which usually means it’s a very prominent site.  Indeed, it’s both culturally and scientifically important, and, unfortunately, has seen a lot of impact and is currently threatened. The source of the problem is a major coal port which is being planned. Interestingly enough, when the developer jumped the gun and started core-sampling the site before authorization, they were  taken to court and recently fined 1.6 million dollars.  Which is a lot of dollars.

The legal action was instigated by RE Sources for Local Communities, a local non-profit. As the Portland Tribune article, which is the best overview of the settlement, notes, it is almost inconceivable that such a large company with it’s long experience in gaining permits did not know it was violating procedures:

According to a document the company submitted to the Army Corps of Engineers four months prior to the non-permitted activities at the site, Pacific International Terminals knew the exact location of site 45WH1 and had said that “no direct impacts to site 45WH1 are anticipated as the project has been designed to avoid impacts within the site boundaries.”

In the document, the company said that to mitigate potential impacts it would have an archaeologist on hand for any work done within 200 feet of site 45WH1. The company also acknowledged that it needed an “inadvertent discovery plan” in case human remains or other artifacts were uncovered, and that it would be required to consult with the Lummi tribe under Section 106 of the National Historic Preservation Act before any work could begin at the site. Pacific International Terminals did none of those things.

“By going ahead and doing it illegally and then saying, ‘oh sorry,’ but actually having the data now, it allows them to start planning now,” said Knoll Lowney, one of the lawyers who represented RE Sources in its lawsuit against the terminal’s backers. “That way if they get their permits someday, they’re ready to build right then.”

It’s not even close to the most egregious archaeological violation seen by the Lummi but it sure is welcome to see such a large fine levied, which also reflects damage to local wetlands.  The suggestion that the company went ahead and did their study now knowing a fine would be coming, in order to save time later, rings all too true.  It wouldn’t be the first company to find it was easier to ask for forgiveness than for permission.

There is more information from RE Sources here and here (the latter of which appears to break confidentiality around the exact site location).  Quite a few background documents seem to have leaked out here, which appear to show the Lummi withdrawing from management agreements about the site brokered by US Army Corps of Engineers (who do a lot of federal archaeology in the USA).  The excellent crosscut.com article I linked above goes into this angle somewhat, and there is more background from crosscut here. 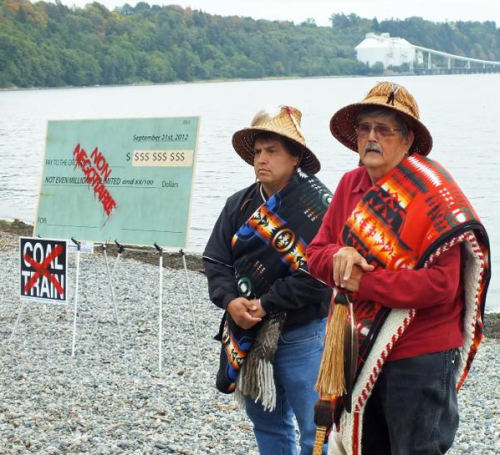 But it’s a further  point of interest is that for some reason the Lummi chose not to join in the lawsuit. Will they see any benefit from the settlement money?  It is not clear where this money will go. It’s welcome that settlers launched a legal action to help protect a pre-contact archaeological site – at least it shows concern – but at the same time does this reflect the will of the descendent communities?  It would be good to know more about this.

In any case, maybe 1.6 million will turn out to be just the cost of doing business for this enormous project at Xwe’ chi’ eXen, or maybe a definable good will come from it.  Right now it’s a little hard to know what to think: I’m as against big coal ports as the next guy in pyjmas, but it is maybe a tiny bit unsettling if archaeology is being co-opted by environmentalists as an instrument to be used situationally or strategically, without Native American consent. The goals of environmentalists and those of aboriginal groups may map closely but they certainly do not map completely. If you’re close to the project in one way or another, then feel free to clarify these issues in the comments below.

By the way, if you want to learn more about this important archaeological site, you can download what appears to be a very well done faunal analysis thesis (mammals) by Mathew Dubeau of WWU, which gives a lot of background information.  It’s from 2012 and on first glance it looks like a top piece of work. It also looks like a thesis on historic fish traps at the site was written, which would be interesting to see but it’s not online (yet).  And credit to the under-rated WWU Anthropology Department for facilitating and supervising the analysis material from decades past.