"Village of the Friendly Indians at the Entrance of Bute's Canal", 1792. Click for zoomable version.

The above image shows a seemingly improbable Kwiakah Kwakwaka’wakw Village (EDIT: probably Homathko Coast Salish Village) at the entrance to Bute Inlet, as drawn in 1792 by a member of Captain Vancouver’s expedition.  With the houses scattered up a steep hillside, the top one apparently partially cantilevered out, it does not fit the average archaeologist’s mental model of a typical Northwest Coast village.  The setting would undoubtedly have some defensive advantages, at least for those at the top.  I know of another image of a steeply-tiered village site which is apparently not strictly a defensive site.  Hard to live on the side of such a steep hill, you might think.  Wouldn’t it be nice to have photographs of such a village?  Aha.

As you can see, the village of King Island in the Bering Straits was an even more precarious village site, with houses supported, cantilever-style, on posts.  The photo was taken by Mrs Allen Shattuck (Agnes Swineford) and is part of a remarkable photo album called  A summer on the Thetis, 1888,  browse-able at the Alaska Digital Archives.  This King Island village looks pretty remarkable.  Occupied until the 1950s, as can be seen in this photo set, the Inupiat inhabitants subsisted largely on Walrus hunting.

It’s not my kind of place, but it should give NW Archaeologists pause.  If this kind of village is possible on a treeless island in the stormy Bering Straits, then clearly the Bute Inlet village is entirely reasonable.  Indeed, the idea that some west coast houses may have been built on stilts has been floating around for a while, as shown on this older SFU web page discussing hearth-mounds in Nuxalk territory, complete with a reconstruction of an elevated house. 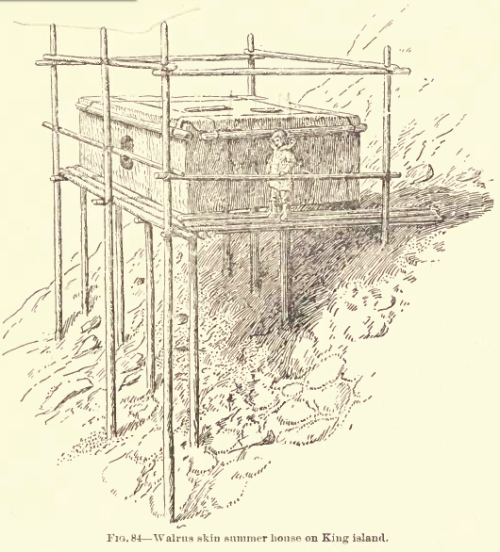 Ben Muse has a good roundup of King Island links, many of them his own – click through for accounts dating back to 1822 and earlier. While the village is unusual, and probably an outlier, it does speak loudly to the wide realm of possibility on the Northwest Coast and how some terrain which just seems “wrong” for habitation may not have been so wrong after all. 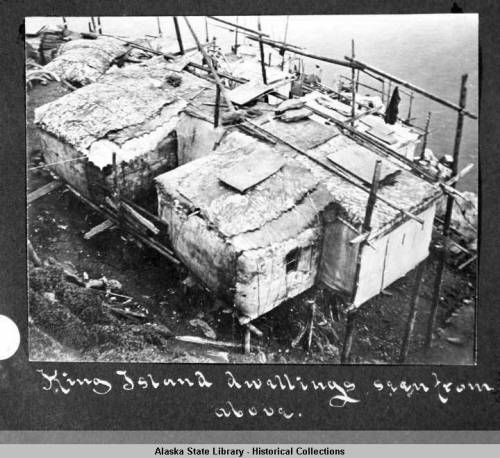 35 responses to “Houses on Stilts”