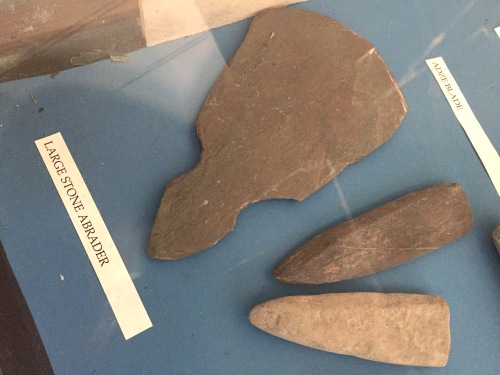 Unusual object in the Mayne Island Museum, and two celts.

The above is maybe the most unusual object I saw in the archaeological cases in my visit to the Mayne Island museum.  As you can see, it’s labelled as a “large stone abrader” and may well be, I suppose.  It’s thin, an the reddish cast and sort of laminate structure of the rock makes me think it is schist, a material commonly used for flaked “slate” as well as for saws.  If it’s an abrader, I’d say it’d be a saw, since no sign (on this face) of any smooth abraded areas.  However, the general shape seems pretty elaborate for any abrader or saw from my experience. Maybe an elaborate ulu-style knife intended to be hafted across the neck.  Or, what I was wondering when I was there, maybe triggered by a false association to the shape, was something like the ground slate mirrors from the North Coast.  These would be polished to a sheen, then wetted, thus providing a reflection, and if memory serves (and it often doesn’t) were used in rituals more than for popping blackheads. But it doesn’t seem polished enough for that.  All the same, the shape rings a bell and rather than spend too much time looking through old Syesis’s (Syeses?  Syesisis?? ‘copies of the journal Syesis’ – phew) I’m throwing it out here for comment.

There’s a few other pictures form the museum below.

Again apologies for the potato-quality pictures from my phone.  There’s a stone bowl to the right, and some spherical stones to the rear which, unless convinced otherwise, I’m going to suggest are natural, possibly concretions.  There’s a variety of handmauls in the vase, apparently from both Marpole (nipple-top) and Strait of Georgia (flat top) time periods.  These artifacts, all of which here are broken, were probably mainly used as a hand-hammer to drive chisels and wedges in the advanced and essential woodworking tradition of the coast. One of them, appropriately near the rear, is of the fairly and irresistible phallic genre. [editor: google your own].  Another has concentric rings. Here’s an image of more, from the Hilary Stewart obituary post. Below is an illustration of the use of a handmaul, bizarrely from the DailyKos site which I thought was just political blow-harding, but the page in question has a lot of pictures of NW Coast woodworking tools.

Use of a handmaul and wedges to split stakes. Source, “DailyKos”, but where is it from originally? I think it’s RBCM?

We’ve talked about anchor stones before, so I’ll just let the picture below sit as an example of how simple stones could be wrapped in basketry or net (though the one so wrapped is actually grooved), and grooved ones could be bound with cordage, as net weights or, more likely, as weights for fishing gear.  As actual anchor stones, you’re probably looking at larger stones, like the one not really visible in the back, which is nicely pierced and must weight about 25 kg.

Weights at Mayne Island Museum.  I sort of like the overlain reflection of crosscut saws, run with it visual anthropologists.

Below is another picture showing the bisected celt from the other day, and also a collection of projectile points.  Many of these are of the contracting stem variety, which often are “Charles Phase”, namely 3500 to 5000 years old or so.  This isn’t surprising since the museum is just an atlatl throw from the seminal Helen Point Site excavated by SFU in the late 1960s (see references below), which contained an early description of what became known as Charles, but then as the “Mayne Phase.” 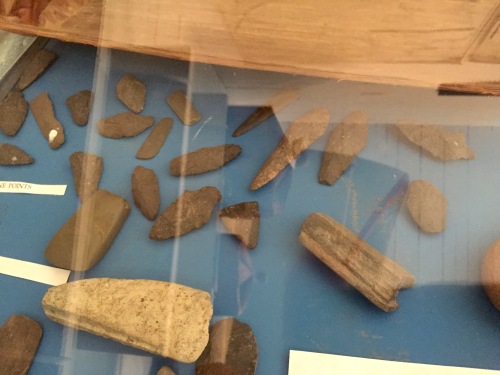 Finally, the museum has two dugout canoes.  One, which I didn’t snap a picture of, is heavily restored and is hung inside the museum above the door.  The second is in the large objects shed out back and is pictured below.  It’s not in the best of condition, but not the worst either.  In life it may have resembled this Muckleshoot example or ones at this post, including that carved by former Lt. Governor Steven Point.  That is, it seems to be a fairly small, shallow draft, “personal canoe” rather than what first might come to mind when thinking of Northwest Coast Canoes.  I wonder if anyone has done an inventory of extant dugout canoes at local museums and people’s backyards.  Growing up it was not uncommon to see them in use as planters and yard decoration and even now I’ve seen a few, like about 10 years ago I saw one  unremarked, in the backyard of a house on Saanich Inlet.  It might be a good idea to systematically inventory and measure and record these fragile artifacts, if it hasn’t already been done.