The only thing better than small town museums are small town thrift shops, but it’s close. I stuck my nose into the Mayne Island — a small island in the Salish Sea — Museum a day or two ago, which is housed in the former gaol  (that’s “jail” for my diverse readers).  These museums can be fun, but you do have to put on your “this place is historically situated” eyeglasses.  As in, there is usually an enormous preponderance of Settler material, and often there is a fairly reductionist, colonialist or otherwisely unfortunate depiction of First Nations. The Mayne museum doesn’t escape this altogether.  The First Nations display is probably 5% of the total, both in material display, and in the timeline presented (I didn’t take a picture but it is typed out pretty much verbatim here, compare to my pie chart timeline).  Anyway, I don’t want to focus on any negative vibes from the museum, they share the general issues of almost every community museum I’ve been to, but neither do I want to ignore them completely. To their credit they have a good section  the Japanese Internment Camps and the fate of Japanese-Canadian islanders during World War II.  Anyway, I took a few lousy pictures with my phone and I’ll share these below and in a subsequent post (since really who wants to read 2,000 words of pontification in one sitting?) We’re going to start with my favourite artifact type.

Bisected celt from Mayne Island museum. Note the sawcut mark on the near side and the asymmetrical shape in plan.

This is one of the more interesting artifacts, to me at least.  I did my MA thesis on these: ground stone chisels and adzes, collectively known as “celts” (with a soft c).  There’s a good picture of the variety of these woodworking tools in this previous post.  One of the things I showed in that thesis was the distinctive use-history of each celt could be understood by creating a model of use-life in the aggregate of all celts.  That is, how the artifacts change from manufacture to discard via resharpening, repair, etc., and how this affects the interpretation of the artifacts you  find in the ground.  One aspect of this was that adzes, typically broader than chisels, would get shorter with multiple resharpening events, but not narrower.  At some point they became too stubby to mount in a haft.  At this point, considering the very valuable raw material they were typically made from, they might be cut in half longitudinally via sawing with a thin sandstone or schist slab.  Effectively this turns one worn out celt into two chisels with considerable use-life left in them. This bisection leaves the characteristic form of a well finished celt with a rougher sawcut on one side only, and often slightly asymmetric in plan.  The tools you find most commonly in the ground are those that are worn out and have little residual value.  This can skew your idea of what people were making and using for the most part.  Anyway, you can see the white specimen above fits that description of asymmetry and sawing well. Here is the relevant schematic.

And here is a figure showing actual celts arranged consistently with the above diagram.  Sorry for the potato quality of the figures, they’re from a scan turned into a JPEG turned into a PDF, and from the days before you could just easily photograph each artifact easily and then paste together a composite of any number of perfectly exposed specimens.  Hrrrmph.  Anyway the big ones on the left are routinely referred to as “property celts” indicative of status, etc.  I’m not so sure, they fit right into the sequence, and, most tellingly, the ones I looked at had use wear and edge damage.  So property sure, but useful property, and used. 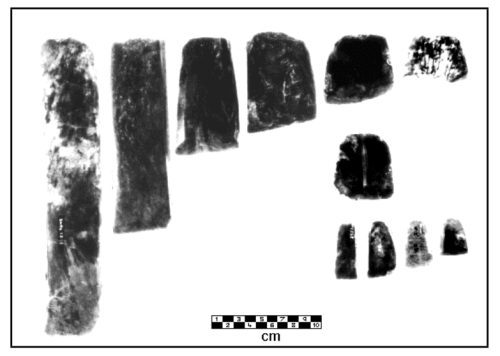 Using measurements you can show that celts with one rough sawcut side, otherwise finished, i.e., ones likely bisected during their use-life, are narrower than those with either two sawcut sides or two finished sides. But the real smoking gun is a small sample of celts which entered the archaeological record when in the process of being cut in half.  Naturally you wouldn’t expect many of these “transitional forms” and indeed these were the only ones in a sample of over 1500 in the study.

Celtus interruptus while being rejuvenated or converted from “adze” to “chisel”. Source: qmackie MA thesis.

In the unlikely circumstance you would like to know even more about celts, you can download the thesis here.  Note this is the published version so pagination refers to the reference as given below. A warning though, a lot of the stuff in the thesis is now redundant (or even wrong) following Jesse Morin’s recent Ph.D. thesis, aspects of which you can also read in a recent American Antiquity, reference below.  And yes, I do intend to update the “Theses Page” on this blog sometime soon.

OK, more on the Mayne Museum in a less self-indulgent post someday soon.

4 responses to “Visiting Celts at the Mayne Island Museum”