Overview map of Coast Salish Villages of Puget Sound. Click to go to the page of interactive maps at coastsalishmap.org

Tom Dailey has put together a large and very interesting site which documents the Coast Salish villages of Puget Sound.  The core of the site is a series of clickable maps (see the left hand side black/white map grid), each of which is marked with little village icons.  Clicking on these icons takes you to a master document with a synopsis of the settlement name and, usually, a couple of sentences about the village.  These are referenced to scholarly literature and other sources.  It is striking to see all these villages on one map, and notable how many are shown on rivers and lakes.

p’kh-OHB: "The Place of Passing Gas", now under Seattle suburb of Auburn, is marked with the red circle. The red arrow marks the Tolt River. Click to go to the interactive map at coastsalishmap.org

A second highly interesting part of the site is a separate map for the Duwamish/Snoquolmie area, which underlies modern Seattle and its suburbs.  On this map, the campfire icons lead one to capsules of Salish stories associated with that place.  For example, the circled campfire on the map above  leads you to this interesting story:

At the head of a streamlet from the old Annie Jack place which runs into the upper White River. This place was called p’kh-OHB meaning ‘to fart’ [onomatopoeia noted – editor]. The story goes that an old slave woman went for water from the spring here. Bending over the pool, she noticed faces reflected in the water. She wanted to make sure they were really people and not some trick of her eyes, but she did not dare look at them directly for if they were enemies that would let them know they had been discovered. With her mouth she made a noise like passing gas. The reflected faces smiled and she thus knew they were real. Calmly taking the water back to her village she told the people what she had seen. Nobody believed her, so she took a few of the children she especially loved and hid with them in the woods. That same night all the villagers were killed in an attack.

The site includes the full text of several stories as well as snippets similar to the above.  For example, the story of Moon the Transformer can be read here.  The story is associated with the Tolt River, marked with an arrow on the map above.   It starts compellingly:

This story begins at the ancient village of TOHLT’wh, which is just across the Tolt River from the little town we know today as Carnation. There were two young women–sisters–who lived there, about 15, 16 years-old. The older one was named tuhk-wee-YAY, the younger YAH-slibsh. Their parents were high-born, important people of the village. One day the two sisters went to dig fern roots, which were one of the main foods of their people. They went to dig on the prairie above a big dam–a fishtrap or fish weir it’s called–that the people had built across the river. Today we know this place as Snoqualmie Falls.  How it came to be changed from a fish weir into that huge waterfall we will find out later in this story.

Now that’s a long trip from the village to the prairie–about 10 miles–even if mostly by canoe and of course you couldn’t paddle over the tall fish weir, you’d have to park your canoe and walk from there. After a long day of digging it was so late the sisters decided to spend the night on the prairie and return home the next day.  […]

Or, consider the story of North Wind and South Wind, with its overtones of Pleistocene Seattle:

[….] Storm Wind blew the rain all over the valley. There was so much rain it washed the blown-down trees all the way to the river, which had become unfrozen. There was a flood which washed through the valley. The flood waters pushed all the trees against the ice dam that North Wind had built across the river.

The ice dam–which had kept the salmon from swimming up the river–broke and was swept down to Elliot Bay. Some of the pieces of ice, though, turned into stone. You can still see what remains of North Wind’s ice dam in the river there not far from the hill where skwuh-LAHTS lived. You can see big blocks of stone in the river when the water is low.

Now, everything was melting. All the land was becoming unfrozen. North Wind ran away. From Elliot Bay he ran across the Sound to what is now called Bainbridge Island. He landed at a place called Yeomalt. That place used to be called Spirit House, or in the language of The People, t’lee-boh-AWLT’wh. But even there he could not stay. He went further North still and took his slave Raven with him. […]

I would love to see a similar site developed for suburban Vancouver or Victoria, to remind us of the vigorous and rich cultural landscape under our feet: a systematized and cartographic Memory and the Valley, if you will. 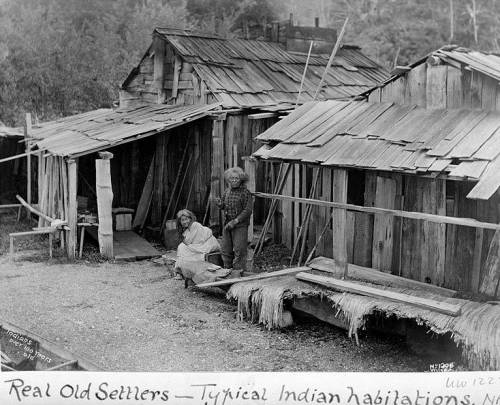