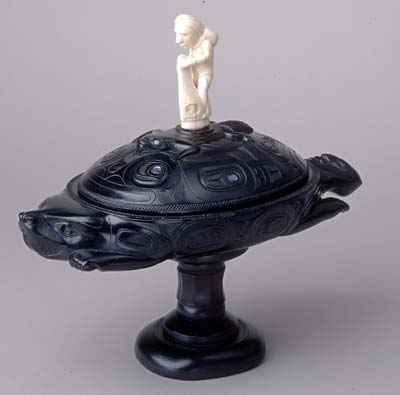 I only have a short post today since I am up to my neck in alligators, courtesy of my day job.  So, take a moment and check out the spectacular argillite compote (a pedestaled serving dish), attributed to Haida master carver Da.axiigang, Charles Edenshaw.  This particular dish is in the collection of the Liverpool Museum – an institution that  holds a collection donated by well-known coastal collector, casual ethnographer, and (apparently) former Liverpudlian, Dr. Charles Newcombe – many of the items in their Northwest Coast section must come from this source.  It is one of the more striking pieces of Argillite I have seen in that the form is so clearly derived from silverware: it is sublimely ridiculous, and I can’t help but feel that Edenshaw was in on the joke.  Yes, he would make what would sell, but a piece like this makes me wonder if he wasn’t slyly pulling the touristic leg, somewhat.

In any case, the Liverpool Museum has attempted to make the Edenshaw compote interactive: if you go to their catalogue page, then clicking on the design motifs they describe highlights them on the image above, or on other images that appear.  I can’t say the effect is very good but I do applaud the attempt to help the new viewer of this artistic tradition pick apart the carefully enmeshed design motifs which are intricately, and often playfully, assembled.

They have some other nice ethnographic pieces, including this Haida hat, a be-thimbled Salish cradle, a Kwakwaka’wakw eagle, and this spectacular bentwood box said to be by Hieltsuk [sic] master artist Du’kwayella , Captain Richard Carpenter.  Most likely the museum is worth a visit if you find yourself on Liverpool. 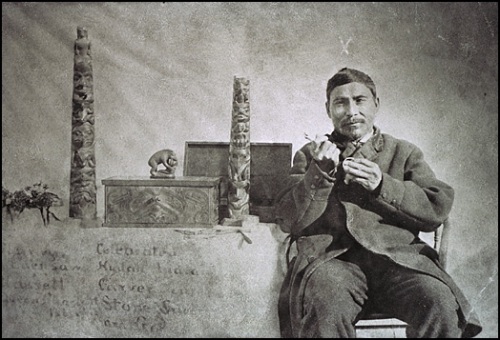