Environmental Archaeology of the Early B.C. Coast: A Video

There’s a cool new video just released about research in the Discovery Islands, mainly Quadra Island, on the central east coast of Vancouver Island (map). The video was produced through the Hakai Institute, a philanthropic organization which over the past decade or so has been funding a lot of primary research in ecology, geology, culture and archaeology on the B.C. Coast.  The archaeological project in the video was focused on the terminal Pleistocene and earliest Holocene, with an effort to document long-term sea level history for Quadra Island, and then use LiDAR-derived base maps to help with predictive modelling and other tools to find old sites on old coastal landforms. That was the plan! I mean, of course the real plan was that grad students would do as much of the brainwork as possible, Daryl would dig, and high-quality coffee would be made.

It actually worked out pretty well. Sea levels are extremely local on the NW Coast – the above image shows that at the same time as the sea level was 200 metres higher than modern on Quadra it was 150 metres lower than modern on Haida Gwaii. The source is an open access paper here; if you find it sort of confusing then Daryl Fedje does a good job explaining it, with an animation, here.

LiDAR can produce elevation models and contours at less than one metre vertical resolution, and it is also possible to digitally remove the trees.  The resultant “bare earth model” gives an extremely fine (if somewhat artificial, moonscape) image of the terrain and many features not really discernible from the ground can be seen.

With sea levels higher than modern and dropping fast, a small archipelago fused together into the large island which is now Quadra. Former shore lines are now stranded high in the forest.  There is a Hakai Blog post here which gives more detail on this process of landform visualization and “virtual flooding”. 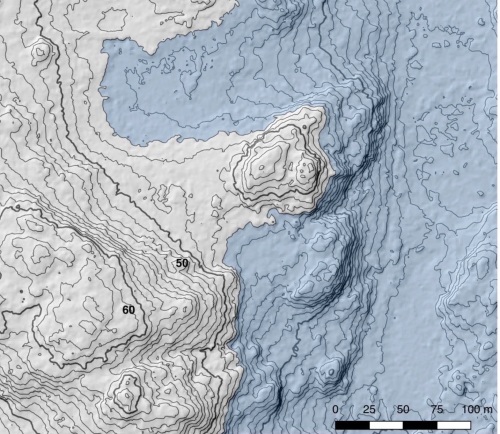 Some of these, such as tombolos, have very high archaeological potential and the project successfully found sites on some of these (thanks largely to work by UVIC grad students Alex Lausanne and Colton Vogelaar).

Alex, and the very top of Daryl’s head, recording strat at a site on a stranded marine shoreline, Quadra Island.

With high potential site locations identified, then digging could proceed. In many instances, excavation went into paleo-coastal deposits, and waterworn stone tools were found, or stone tools embedded in paleo-estuarine deposits. This part of the project isn’t really nailed down fully yet since it turns out to be a tricky dating context, but there are indeed many archaeological sites on stranded marine terraces of various elevations.

So the video gives a good sense of the project, this post is just for a little added context.

Hands off The Penguin Mug!

5 responses to “Environmental Archaeology of the Early B.C. Coast: A Video”