How to Make a Petroglyph

I’ve often said the graduate student work is the backbone of the archaeological discipline in British Columbia.  Today I get to report on more student work – but this time its a fascinating study done by an undergraduate student at Camosun College here in Victoria.  The student, Christine Stathers, did an experimental archaeology project for her Anthropology 240 course, and she kindly agreed that I could post some of the results here.  The results are highly informative for our interpretation of petroglyphs, I think. 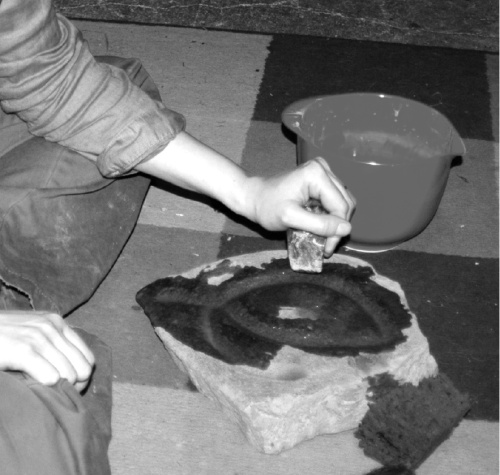 Use of hammerstone (cobble chopper) to make a sandstone petroglyph. Credit: Christine Stathers.

I think there is a lot of received wisdom about petroglyphs and a lack of hard information.  Ethnographic accounts are thin on the ground, perhaps because these spiritual sites were not and are not the proper topic of discussion with Anthropologists, at least.  There is often no archaeological context for these sites other than the designs themselves: no datable material, no associated artifacts, no faunal remains, etc.  And one of the key questions when considering or weighing possible interpretations might be, how long did a typical petroglyph take to make?  If it took an hour or two, that might rule in or rule out certain genres of interpretation; if it took months that might also suggest certain cultural practices or contexts of manufacture.  Since petroglyphs are an archaeological site of wide public interest, of considerable cultural importance, and of little firm archaeological knowledge, then any steps taken to better understand their manufacture could pay dividends down the road.

With this in mind, Stathers set herself a simple task: make a petroglyph on a piece of local sandstone.  She tried a number of different ways of creating grooves, including abrasion and  indirect percussion, but pecking using a hard-hammer was far and away the most effective.  She reports on the various costs and benefits of her tools (illustrated below) and discusses her decision making process throughout.  Interestingly, the hard-hammer of choice was a basalt cobble-chopper she had made for this purpose – an idea which may have percolated down from Dan Stueber, when he was at UVIC doing lithic replication last summer and made some stone bowls with the students, also using cobble choppers. (Hi Dan, I owe you an email….). 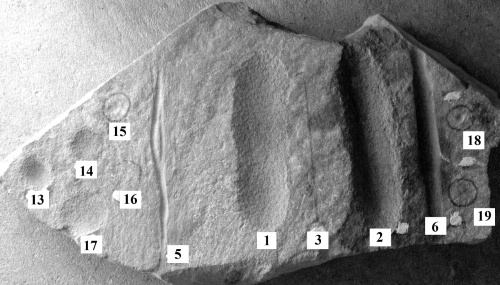 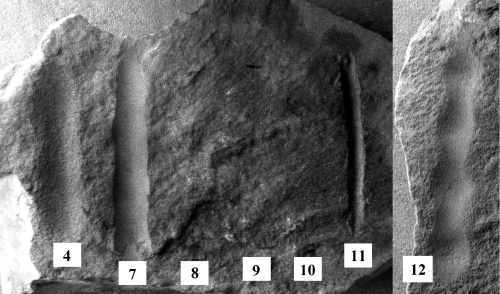 Photos and Caption above by Christine Stathers.

The bottom line is the deeply pecked, well formed and elegant petroglyph at the top of this post was created in only one hour and fifty three minutes.  The basalt cobble-chopper-hammer-stone was resharpened twice.  As Stathers concludes:

Previous research on rock art of the Northwest Coast has focused almost exclusively on stylistic, functional and formal analyses of petroglyph images. Through experimental archaeology posing research questions regarding methods of petroglyph manufacture, a large amount of data could be added to this somewhat missing element in Northwest Coast culture’s very significant rock art traditions. Determining materials used and the length of time in which a petroglyph may have been created, insight into just who was actually creating these could radically shift the traditional ideas that petroglyphs were predominantly associated with spiritual activity and created exclusively by ritual specialists. A secular individual could just as easily create a deeply pecked petroglyph in fewer than two hours if he used a basalt hammerstone; this may explain the marked differences in style and skill seen within rock art sites. If not dramatically altering these large-scale perspectives, replicative approaches to petroglyph creation could at least aid in determining weathering patterns as part of determining relative dates within sites, and clarify the types of artifacts and debitage that may turn up in any excavation at a pre-contact petroglyph site.

This is impressive stuff for a 2nd year archaeology class and speaks well to Stathers’ initiative and to the mentorship of her instructor, Darcy Mathews.

I’m going to make one little quibble – she rejects nephrite on the basis of a personal communication from Mathews (gotcha) that there is no evidence such material was used as a pecking stone or hammerstone.  In fact, Mackie (1992) explicitly illustrates an example of a ground stone celt which shows a battered and crushed edge really only consistent with use as a hard hammer on stone.  In the business, this is known as a “vanity objection”: good work but please cite the reviewer…..  On the other hand, this was the only celt in a sample of 1500 or so which showed this degree of edge crushing.

Crushed edge of a celt from the Victoria area (DcRu 65:2) consistent with use as a hard-hammer. Source: Mackie 1992 M.A. thesis.

26 responses to “How to Make a Petroglyph”