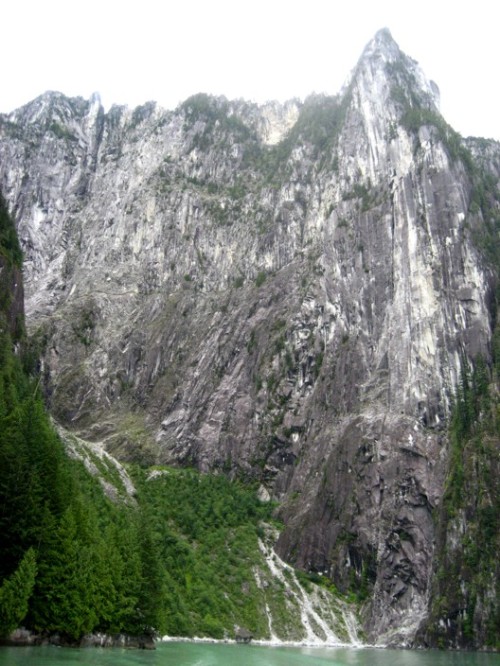 Yesterday’s post about Marianne Nicolson’s powerful pictograph in Kingcome Inlet and the post from a few days ago about the enormous Tsunami in Lituya Bay got me thinking again about recent work in Knight Inlet on the central B.C. Coast (map).

A recent project by a team of geomorphologists and an archaeologist, UVic’s own Duncan McLaren, investigated oral historical accounts about Kwalate Village of the A’wa’etlala and Da’naxda’xw peoples, of the Kwakwaka’wakw First Nations.  The accounts state that a landslide in Knight Inlet triggered a local Tsunami which swept this village away. This account is known anthropologically through a number of sources, including Franz Boas (1910, Kwakiutl Tales):

“About three generations ago, or possibly at an earlier date, a large portion of the mountain opposite Kwalate Point slid into the inlet causing a huge tidal wave which wiped out all of the inhabitants of the village opposite…and the vast slide is noticeable today”.

Of course, the story of the destruction of Kwalate is still told and the dead, unknown in number but perhaps up to one hundred, are still mourned and memorialized in the surrounding communities.  While it is not necessary, or even desirable or possible, for archaeology to confirm oral historical accounts, when that happens it can be of interest to archaeologists and First Nations people alike.

Bathymetry of the landslide lies on the bottom of Knight Inlet in water up to 500 metres deep. Source: Bornhold et al. 2007.

The research project did indeed confirm that there was stratigraphic evidence of  Tsunami deposits overlaying a one-metre thick shell midden, with a series of radiocarbon dates putting the Tsunami event at between about 1550 and 1600 C.E., somewhat older than Boas’ estimation.  But, being 300 to 400 years ago, they are still within recent cultural memory among those who have strongly structured oral historical traditions.

The origin of the slide, which consumed over 800 vertical metres of mountain and amounted to about four million cubic metres of rock, is only a few kilometers away and the wave would have struck just over one minute after the failure allowing no time for escape.  The authors describe the wave as 2-5 metres in height.  However, such waves constitute the displacement of the entire water column at a water depth of several hundred meters, and are not just surficial phenomenona like normal waves. When such a wave runs up into shallow areas the hundreds of metres of water column are forced upwards and outwards, increasing the size of wave by several orders of magnitude just when it matters most: as it hits the shore

In memory of the dead from the four numayns, or kinship groups afffected , four pictographs were painted on a nearby rock face.  Each design is a copper, comparable to Marianne Nicolson’s “Cliff Painting” which is in the next inlet to the north.  These memorial pictographs can still be seen to this day.  As seen below, note that each copper design is different, and most likely represented an individual, named copper with its own history and deep set of associations. These would have been immediately recognizable to all who passed by this tragic location.

Pictographs near Kwalate, as recorded in 1935 by Francis Barrow. Click to enlarge. Source: McLaren et al. 2005.

8 responses to “Destruction of Kwalate Village”