“Prehistoric Cairns of Vancouver Island”: notes for a lecture given in 1901 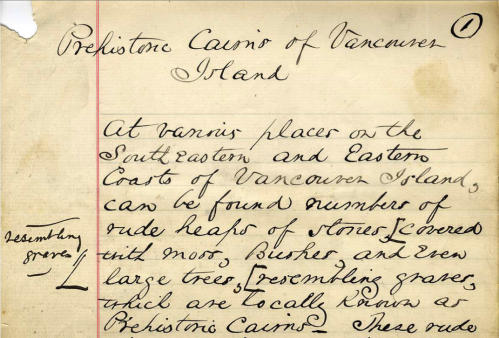 “Handwritten manuscript, on ruled paper with red-lined margin. Pages hand-numbered 1-20. Signed and dated: Frank Sylvester, Victoria, B.C., June 10, 1901. Appears to be notes for a talk that Frank Sylvester gave, concerning burial cairns on Vancouver Island, his method of excavation of the cairns, and his theories as to the meaning of the cairns and the ancestry of the people buried there.”

It’s a curious document, a mixture of interesting observation, shameless plunder and racial theorizing.  It’s also one of the more complete descriptions I’ve seen of the burial cairn excavation activities of the Victoria Natural History Society.  I don’t recall seeing it cited in the literature, so it’s possible others haven’t come across it either.  In the interests of broad circulation and easy reading,  I’ve transcribed it (PDF), and I also put a version on google docs if anyone cares to improve that transcription.

There’s a brief biography of Frank Sylvester here.  I don’t know much about him, but I assume he was a member of the Victoria Natural History Society, a group including antiquarians which took it upon itself in the late 19th century to “open” a large number of burial cairns in the Capital area.  James Deans was a prominent member of this society and wrote several newspaper articles, including one on the Cadboro Bay “City of the Dead“.  So Sylvester was by no means the first to indulge in this unsavoury pastime, but coming as it does in 1901, his lecture perhaps represents the culmination of popular thinking on this topic. 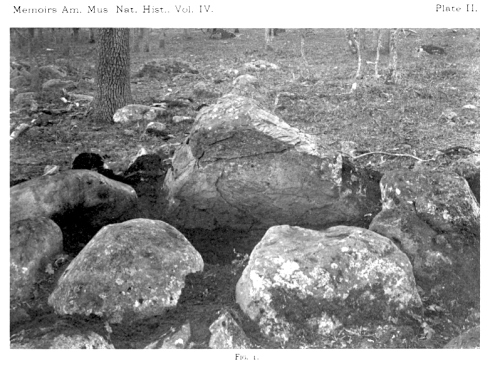 Opened Cyst from within in Cairn No.2, Cadboro Bay,nearVictoria,  B.C. Source: Smith and Fowke 1901.

Archaeologists were also interested: Harlan I. Smith and Gerard Fowkes published the Cairns of British Columbia and Washington (downloadable!), also in 1901, one of the volumes stemming from the Jesup North Pacific Expedition (overview, free book) and Smith’s involvement in that.   Interestingly, Sylvester makes no mention of Smith or this publication. It’s nice to have another document telling tales of this time when archaeologists earned the reputation as grave-robbers we are still, on occasion, trying to shake.

Sylvester’s attitude towards the local First Nations can’t be varnished.  He saw oral tradition as stemming from ‘legend factories” where “legends are manufactured by the yard, and cut off in lengths to suit the occasion”.  He therefore rejects any Indigenous knowledge of these places, not that he was very likely to have had access to much in any case. He continues, on Page 17-18, with,

The oldest and most accomplished Liars amongst the various Indian tribes, have been repeatedly questioned, and in spite of their most frantic efforts to invent some plausible theory as to their origin, the invariable result of the interview has been to elicit from the terse but euphonious answer Halo Cumtux which in crude, crystallized English means “I’m blessed if I know.”

I’m not really going to try to redeem Sylvester, he was of his times certainly, but all the same I wouldn’t want to go out of my way to note there is interesting information on the contents of these burial cairns, layers of clean charcoal for example – you can read the transcript for that.  Actually, one of the most interesting incidents in his lecture is the day they discovered a complete skeleton, while having a certain German Professor along with them.

We had on the occasion invited as our guest, Professor Carl von der Stien [?sic, probably Stein], an eminent German Scientist, promising him a skeleton, if we found one and being fortunately successful, we gave him the skeleton, and it is now in a museum in Germany. Since that time, 1897, we have been unable to find another one.

You know, it would actually be a worthwhile project to try to track down this particular skeleton, originally from Cadboro Bay, and now languishing in who knows what obscure German museum, and repatriate it.

The UVIC library does a good job of digitizing this manuscript, though only one page can be seen at a time and though the images are awkwardly tiled, they are extremely crisp. For BC history buffs, there are other Sylvester manuscripts probably with a lot of interest in them, for example:

13 responses to ““Prehistoric Cairns of Vancouver Island”: notes for a lecture given in 1901”