I posted yesterday about the Manis Mastodon site and its possible status as a pre-Clovis site on the Olympic Peninsula.  Clovis projectile points are so distinctive that most archaeologists have no problem assigning even an isolated find of such a point, lacking in any kind of stratigraphic context or any associated dates, to the Clovis archaeological culture.  We know from sites elsewhere in North America that Clovis dates to a pretty narrow window, perhaps only 13,200 to 12,800 calendar years ago.  It has always been very closely associated with the ice-free corridor route for the First Peopling of the Americas and is predominantly known from classic sites in places like Colorado, New Mexico and Texas. So it may come as a surprise to some that Clovis is pretty well represented in Puget Sound and north to Bellingham Bay, although only from surface or other finds without provenience.

The diagram above is adapted from a paper by Dale Croes et al. (2008).  The East Wenatchee site (Richey-Roberts) is a famous cache of Clovis artifacts, well-researched,  in Central Washington State on the Columbia River.  The red dots are all surface finds of Clovis projectile points.  Presumably this makes eight, 13,000 year old sites in Puget Sound, plus another two just east of the Cascades.   As you can see, East Wenatchee is not exactly a distant western outlier of Clovis culture.  Indeed, Clovis looks like it had a pretty substantial coastal presence.

Some might postulate that it is a late backwash of the First Peopling of the Americas, a little corner where Clovis lingered longer or  arrived late.  With this concentration of Clovis, and an absence of Folsom, maybe this is the origin of Clovis, which after all has been likened by Jim Dixon in a masterpiece of cheekiness, to a sort of degenerate harpoon technology.  Down the Puget Lowlands, then up the Columbia and across the Rockies is pretty viable way into eastern North America from the coast – Clovis is then the derivative terrestrial adaptation of a coastal peoples as they start to infill the continent from the west.   OK, so maybe this is stirring the pot a bit, but my sense is the World’o’Clovis is in pretty serious disarray these days so, hey, lets consider all options.  That’s the scientific way, right guys?  Right? 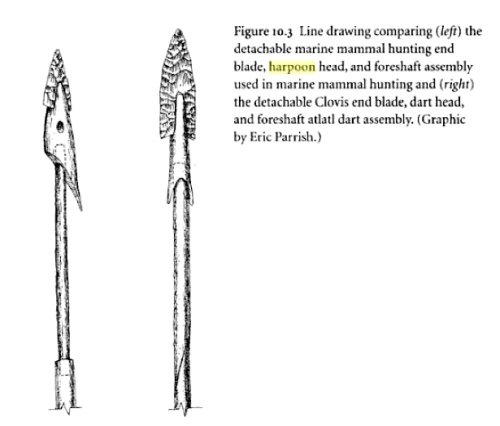 Interestingly, the Wenatchee site includes a large number of bone artifacts, which some researchers (Lyman et al. 1998 PDF)  have suggested are specialized hafting elements.  However, despite trying (perhaps just a little too hard!) they do not completely rule out  the possibility that these bone “rods” include some bone projectile points – shades of the anomalous object embedded in the 13,500 year old Manis Mastodon site.  Deeply penetrating, resilient projectile points or killing lances may have been a vital part of a big-game hunting toolkit, yet ignored because of the fetishism surrounding the charismatic Clovis points.  Bone working technology is also commonly seen as a necessity for a maritime adaptation. And, frankly, the elaborate bone hafting elements described by Lyman et al. also conjure up the gadget-orientation so typical of maritime societies, and sailors more generally. 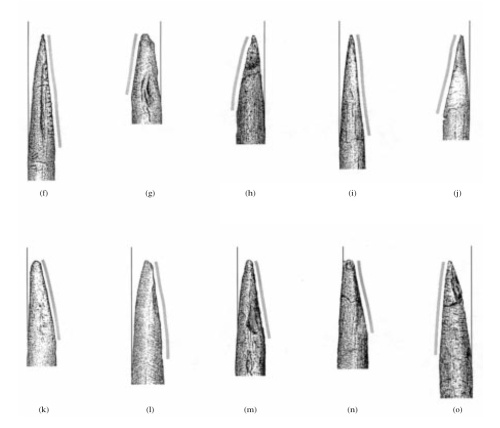 "Bone rods" from East Wenatchee Clovis site. Don't let me catch you calling any of these projectile points, Mister. Especially not (h) even though it seems to have an impact scar. Source: Lyman et al. 1998: 892.

For reference, I also include in the top figure the Ayers Pond bison site,  a Bison antiquus dating to 13,600 years ago which may have been butchered.  The oldest known sites in southwestern British Columbia are in the Stave River watershed, with two sites returning dates around 11,900 years ago.  All in all, the Pleistocene archaeology of the Salish Sea is starting to take shape, and we have barely started to look. 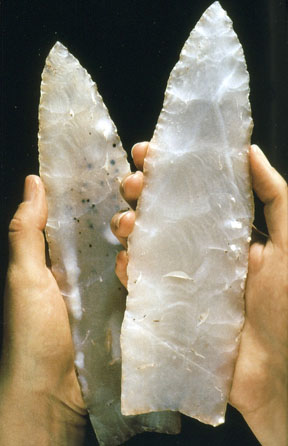