Village of the Friendly Indians near Bute's Canal. Watercolour by William Alexander. Source: University of Illinois.

Yesterday I posted an engraved  view of  a village near the entrance to Bute Inlet, the view seen in 1792 during the voyage of Captain Vancouver.  Much as with the earlier posts on John Webber (1, 2, 3), there are multiple versions of these scenes.  The above shows a watercolour rendering made by William Alexander, a well known artist and draughtsman of the late 18th century.  It seems his series of works on the NW Coast was not done from life but was a commissioned finalization of the drawings of William Daniell, who was actually on Vancouver’s voyages, and perhaps other artists/oficer’s sketches.  At least that is the story I’ve been able to winkle out, starting from a position of sheer ignorance.  Nicely, though, Alexander’s watercolours from the Vancouver Voyage series, covering Alaska, the Northwest Coast and some views of California and Chile, are all available online through the Newberry Library at the University of Illinois.  These renderings were not familiar to me and perhaps not to you, either.

The picture above, viewable at the library here, is in close agreement with the version yesterday.  Possibly a little more detail is clear about the structure of the uppermost house.  The versions available online are not very high resolution, all the more maddening because on the catalogue page it shows the source image as being a 67 meg TIFF.  That’s a lot of bandwidth, but a higher resolution jpeg would be nice, U of I. 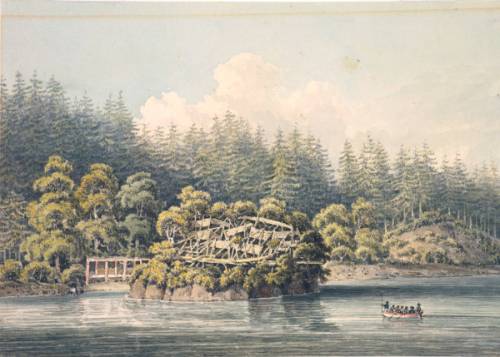 The above image (original) is also interesting.  It clearly shows a shed-roof house frame on the left, while on the small islet or peninsula there is a chaotic assortment of structures which I take to be small house frames on a defensive site, complete with either boardwalks or pallisades overhanging the bank. 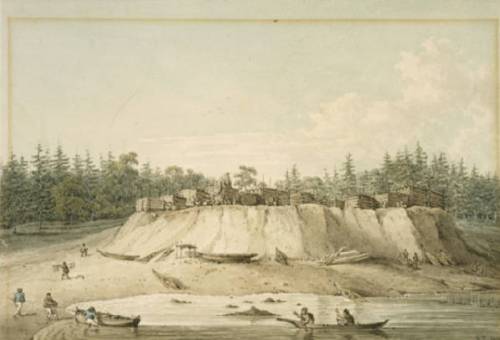 The above view of the very distinctive setting of Cape Mudge is very striking (link), with the houses jostled togethery presumable for defense.  Note the small structure on the uppermost beach.  Also note the lack of driftwood — one of my pet hobby-horses is to think of the NW Coast without the massive amounts of logging debris which still give an artificial look, and probably configuration, to many stretches of shoreline.  Almost all of the logs you see on a beach have been cut by a chainsaw – think about the implications of that for daily life in the pre-contact period.

While I had never seen the Cape Mudge image before, I have seen numerous renditions of these “remarkable poles“, which I take to be structures for duck-hunting nets.

The Discovery on the Rocks, Queen Charlotte Sound. The Chatham stands off in the distance. Watercolour by William Alexander; sketch by Zachary Mudge. Source: University of Illinois.

It wasn’t all smooth sailing and civilized sketching, as the well known image above exemplifies.

As I noted, you can see the whole set here, though the resolution is poor.  I’ve found a way to munge the URL to at least view them larger, but they are still quite grainy.  I wish the UI would link to the original TIFFs — bandwidth yes, but trivial compared to what a major university handles every day. I am sure historians have figured out the exact place of these images and know the entire story of the relationship between Vancouver, Daniell, and Alexander and if anyone knows the story or has any other insight, I welcome comments.

But for now I am just enjoying these skillful watercolours with their origin in the first decade after the first Europeans to enter the Salish Sea. 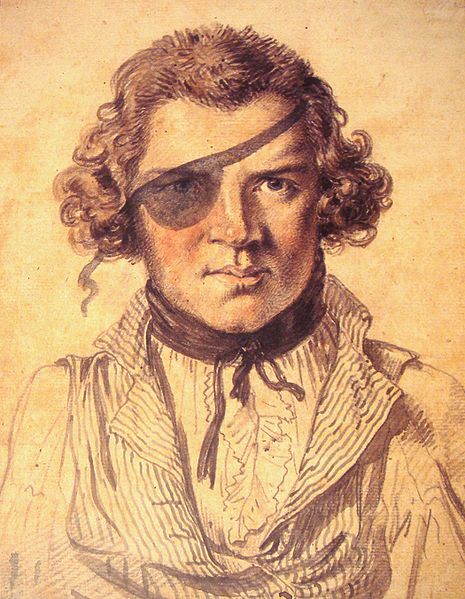