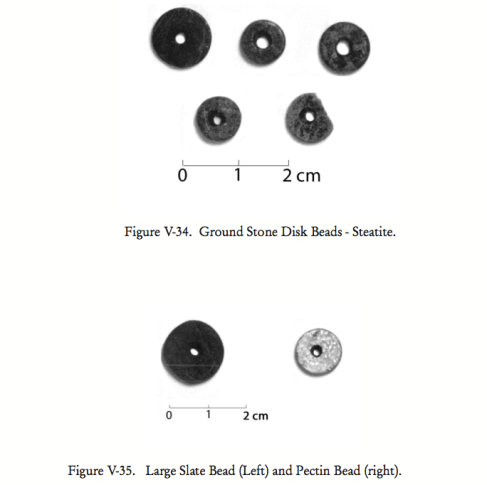 Examples of typical NW Coast archaeological beads, from B. Thom, reference below.

There have been some exciting finds on the Sunshine Coast (northeastern Strait of Georgia) in shíshálh First Nation territory, including a 4,000 year old burial with over 350,000 beads (!), as this short news item explains (PDF).  This is notable for a bunch of reasons:

Firstly, each bead represents a significant investment of labour.  Even if we conservatively say that you can make a small stone or shell bead in 5 minutes, then at 12 beads per hour, the individual was buried with some 29,000 person hours of labour investment.  That’s about 194 person-months of work, or just over 16 years of full time employment for one person.  (Incidentally, the five minutes is less than half the time UVIC’s own Brian Thom estimates from a brief experiment in Chapter V, here.)  However we may conceptualize the concepts of “work” and “effort” and their relationship to wealth or prestige in the past, we can’t just write off the full time labour of one person for 16 years, or 16 people for one year.  That’s a huge investment of time which could otherwise be used for fishing, hunting, gathering, or creating useful or durable technologies such as houses, canoes, or what have you.  Such measures of labour investment are commonly, if sometimes simplistically,  used to gauge the importance of the deceased individual in both life and death.  Apparently, in addition to this individual, there are other burials, including a young woman buried in a similar manner, from the site (DjRw-14).

Secondly, the burial is very old in relation to its elaboration..  While I haven’t read anything other than the news article, I’ve heard through the grapevine that the dates of around 4,000 years ago are solid.  This is very challenging for some constructions of NW Coast culture history which see something of a slow march of progress towards Marpole at least, if not to the present.  Taken with the amazing, but largely unpublished, finds of Wapato intensification from Pitt Polder, and some other early (also 4,000-ish) elaborately “em-beaded” burials, notably from Tsawwassen and Cowichan Bay, and the  “Charles Phase”, long seen as a generic time interval in which people “waited to become complex”,  is taking on a new character, no?

A third related thought is that it is striking how the investigators, Terence Clark from the National Museum of Civilization and Gary Coupland from University of Toronto, are able to conduct archaeological investigation of human remains in an ancient cemetery.  It speaks very well to their community relations I suspect (see the article) but also highlights the mosaic of indigenous perceptions and reactions to the practice of archaeology within the Salish Sea, many locations in which such a project of deliberate targeting of human burials would be currently unthinkable.

Finally, the article suggests an ambiguous degree of protection for the site, with something called a “map reserve” providing 10 years of protection from development.  I am not at all sure what this is about.  I would have thought that the site itself, protected under the Heritage Conservation Act, presumably with the highest ranking of cultural and scientific significance, would be immune from alteration for that reason alone.  Thoughts? Clarification?

Anyway, these results are very interesting, and pose a welcome challenge to received notions of the trajectories of “cultural complexity” in the Strait of Georgia.  I look forward to seeing more from this exciting project.