I know I occasionally grumble about how regional, publicly funded museums in B.C. are almost devoid of archaeological and aboriginal substance, especially on the web.  A happy exception to this is the Langley Centennial Museum near Vancouver, which has an unusual and interesting virtual exhibit of N’laka’pamux basketry.  The museum is in the possession of a large collection of these baskets, made by an interesting historical figure from the Yale-Lytton area of the Fraser River: one Kathleen Pearson. The exhibit consists of a number of pages, including a short essay (5 pages) which is strangely not clearly linked, based around Boas et al.’s 1928 Bureau of American Ethnology Publication.  The museum goes beyond the historical frame by discussing recent named weavers such as Mary Ann James, and the continuing tradition of N’laka’pamux basket making.

It is really great to see a relatively small museum explicitly recognizing that the world didn’t begin in 1846 and going beyond the story of white settlers as if they were a self contained pod of culture beamed down from Queen Victoria’s forehead.  The other thing  I particularly like about this small web exhibit is that the museum highlights the activities of another group of unsung heroes in the world of heritage conservation: the conservators who restore, stabilize and protect the artifacts entrusted to museums.

To be honest, baskets don’t really speak to me that much, but I do admire the skill and craft and artistry in their making.  I also admire the skill of the conservators.   The Langley Museum has several pages detailing the treatments of a couple of baskets from first cleaning up to constructing custom storage frames.  It is worth downloading the accompanying PDF file (6 megs – apparently a converted powerpoint presentation) which has many extra pictures not seen on the web.  Intricate knowledge of the raw materials, of their interactions with each other and with the environment, and the effect of temperature and light and moisture are all part and parcel of the Conservator’s trade. Without these applied skills, many objects in museums would deteriorate very rapidly, and many others would never be in a suitable condition for display.  If you see your neighbourhood conservator today, buy them a beer (or, as likely, a cup of herbal tea!).  And just hope your local museum has the budget for effective conservation, or the history of your community my be deteriorating inside the same museum you imagine is protecting it. 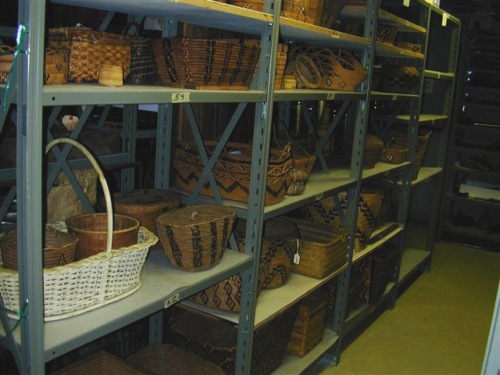 Baskets awaiting conservation in 2004 at the Langley Centennial Museum.

One response to “Basket Conservation at the Langley Centennial Museum”