Dale Croes kindly sent me a link to the final report for the Qwu?gwes wet site (45TN240), which is  is located on Mud Bay at the southern end of Eld Inlet, Puget Sound, near Olympia, Washington (map). The site was apparently first occupied about 800 years ago.  This report, hosted at NewsWARP, checks in at almost 1,000 pages and about 80 megs, and is the product of more than 10 years of field-school and collaborative research with the Squaxin Tribe.  There look to be about two dozen authors. If you’re not up for the whole thing right away,  there’s a much shorter executive summary you can download here. But it’s a really impressive report covering everything from stone to bone to wood, bark, root, wood I.D., ethnobotany, paleo-seismology, fishtraps, and more.  It’s very clearly written at an accessible, non-technical  level, largely by students. I’ll pick out a few of many highlights below. END_OF_DOCUMENT_TOKEN_TO_BE_REPLACED

I know I occasionally grumble about how regional, publicly funded museums in B.C. are almost devoid of archaeological and aboriginal substance, especially on the web.  A happy exception to this is the Langley Centennial Museum near Vancouver, which has an unusual and interesting virtual exhibit of N’laka’pamux basketry.  The museum is in the possession of a large collection of these baskets, made by an interesting historical figure from the Yale-Lytton area of the Fraser River: one Kathleen Pearson. The exhibit consists of a number of pages, including a short essay (5 pages) which is strangely not clearly linked, based around Boas et al.’s 1928 Bureau of American Ethnology Publication.  The museum goes beyond the historical frame by discussing recent named weavers such as Mary Ann James, and the continuing tradition of N’laka’pamux basket making.

It is really great to see a relatively small museum explicitly recognizing that the world didn’t begin in 1846 and going beyond the story of white settlers as if they were a self contained pod of culture beamed down from Queen Victoria’s forehead.  The other thing  I particularly like about this small web exhibit is that the museum highlights the activities of another group of unsung heroes in the world of heritage conservation: the conservators who restore, stabilize and protect the artifacts entrusted to museums.

END_OF_DOCUMENT_TOKEN_TO_BE_REPLACED

Ancient Basketry from the Biderbost Site

The Biderbost site is on the Snoqualmie River near Seattle.   Since 1960, a series of excavations have revealed a remarkable set of artifacts made from organic materials, preserved because of the water-saturated, anaerobic conditions of deposition.  The Biderbost site was the first site of its kind to be excavated in the Northwest, at least to a professional standard.  The Burke Museum has an excellent page on this site, including a page of basket photos (reasonable resolution, yay), weaving techniques, and conservation of these delicate artifacts.  There are also three informative (if not exciting) videos on YouTube about:

These artifacts, which include a large number of basketry pieces, date about 2,000 years ago.  Since most archaeological sites in the Northwest preserve stone, shell and bone fairly well but not wood, bark or root, these sites (which also includes Ozette, Hoko River (pics now broken fixed), Pitt Polder, Qwu?gwes, Kilgii Gwaay, and others) offer remarkable insight into the organic technology.  Ordinarily, we don’t see this stuff at all archaeologically and yet it may be the majority of the traditional technology; it may be stylistically distinctive and different compared to stone and bone tools; and it may be disproportionately representative of the lives of women.

Why there aren’t more archaeologists focusing research questions on these sites is unclear to me: yes, they are awkward sites and expensive and time consuming, but then so are shell middens.  I suspect it boils down to the unfortunate fact that the key NW wet-site researchers in the last thirty years (Dale Croes and Kathryn Bernick) were never in the kind of academic position where they routinely supervised graduate students and hence they were never able to harness the energy and intellect of that backbone of NW Coast Archaeology: the Master’s student and their diverse and often excellent theses.

I would be remiss in not mentioning that the Burke Museum has a Biderbost “Adopt a Basket” program to help with long term conservation of this remarkable suite of artifacts. 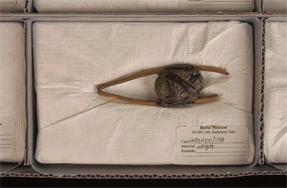 Fishing weight wrapped in basketry with sticks attached. At a normal site this would appear to be an unmodified pebble. Source: Burke Museum.