I often use eulachon (Thaleichthys pacificus, a small, anadramous smelt) as an example of “archaeologically-invisible” food. They are also known as “candlefish”, on account of being so oily that a wick jammed down their throat will burn like a candle.

These small fish run by the millions up rivers to spawn, where they could be intercepted.   Traditionally, many or most eulachon would be processed into eulachon oil, or grease: a highly nutritious, calorie-dense substance that preserved very well and could also be used to preserve other foods such as berries.  The means of processing was to put them into a large container, perhaps an old canoe, known colloquially as a “stink box”, let them “rest” there for a week, and then heat them up, enabling the oil to rise and then be skimmed off, or pressed out.  The residue (bones, guts, brains, etc.) would then be returned to the river and few or no bones would make it away from the processing site.  In this way, eulachon provided a staple food, a nutritional supplement, a means of preservation, and an extremely valuable trade item – when Alexander Mackenzie arrived near Bella Coola in 1793, “Over Land, From Canada”, he did so on one of the well-worn grease trails that linked coast to interior. Since the fish arrive in the early Spring, they were hailed as starvation busters in lean years.  Nonetheless, archaeologically they are almost invisible, relative to their importance.

It is therefore sobering to read that U.S. President Obama has listed the Columbia River eulachon as an endangered species: eulachon are becoming almost invisible relative to the real world now, it seems.

I don’t know much about their status in Canada: this page suggests that the Bella Coola eulachon run has collapsed, prompting the Nuxalk to hold a Feast of Shame to encourage their return (see also this page by UVIC Anthro’s own Jacinda Mack, ).  It is so depressing to read of another species once so numerous it could be raked from the water, reaching a state of population crisis.  In the Oregon article, the commercial fishermen are quoted as opposing the measure.  Is this just another tragedy of the commons?  I am no biologist, but it seems to me that the professional fisheries managers have managed almost every species to the brink of extinction.  No doubt they are under intense political pressure, but we should probably also consider that the task they are set is un-doable: nature is not readily manageable, we understand it too little, our appetites are too great, and our selfish interests too intractable.  We’re burning the candlefish at both ends, you might say.

So, today the Columbia, tomorrow the Nass?  Check out this gorgeous photo essay on a Nass eulachon camp, before its too late, while this photo set on Kemano River eulachon is also worth a look.  For a sound historical overview and modern catch figures on the Bella Coola River, see  this M.A. thesis by Nuxalk student Megan Moody.  This video (.wmv) is worth watching too: in the middle there is an excellent interview with Nuxalk Chief Councillor Spencer “I know more Latin than Nuxalk” Siwallace, who is either unusually young, or I am getting unusually old.

Anyway, not a very archaeological post, but then, what is the point of studying eulachon in the past while they are going extinct in the present?  Virginia Butler has one answer — historical benchmarking — but I am not sure we really need that, compared to what we can see with our own eyes. 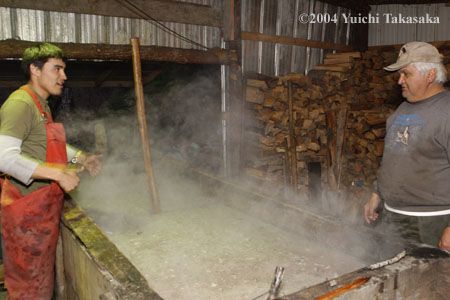 When the stick stands upright on its own, there are enough eulachon in the rendering vat. Source: blue-moon.ca 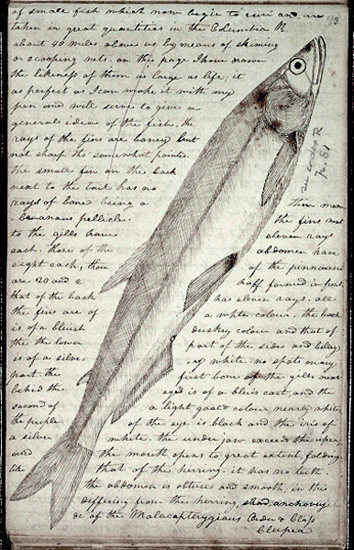 Eulachon as recorded in the journals of Lewis and Clark, February 24th, 1806. Source: unl.edu