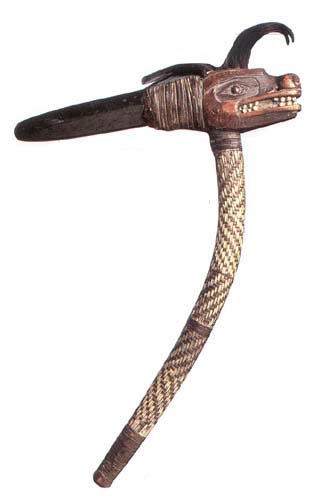 Tlingit adze with quillwork and copper insets in the Museo de América, Madrid.

Even though the Spanish were among the first outsiders to eplore the NW Coast, you don’t hear much about collections they may have made while out here.  So it is welcome to see this (now, 10 year old) writeup on NW Coast items in Madrid’s Museo de América.  The article suggests that many such objects were collected but not retained in Royal Collections, perhaps because they were considered inferior to, say, Aztec and Inka pieces.  Either way, there are some spectacular objects illustrated in the article, though the photographs are not very sharp at all.

Going to the Museo de América’s website shows they have a search function and some online thumbnails.  This link should take you to their 52 pieces labelled as NW Coast, while this takes you to six pieces listed as from BC.   Most of the illustrations are extremely low resolution, though I found one or two which aren’t such as the outstanding Haida waterfowl, below.  Look how fluid the form-line rendering is in this 18th century piece.  Click the images on the Museo site for slightly higher resolution or go to the records page by clicking on “Ficha Completa” and then on “Ampliar Imagen”, where you can zoom in slightly using the magnifying glass.  Also worth checking out, this Tlingit clap-board style “rattle”, this foreshaft and point, and this rather spectacular hat.  Anyway, something to poke more: online catalogues in Spanish Museums.

EDIT:  I see their search function makes links to search results expire after a short time so I crossed them out, above.  Pretty lame, but there you go.  Get into the system via the generic system and then browse around, if you want.