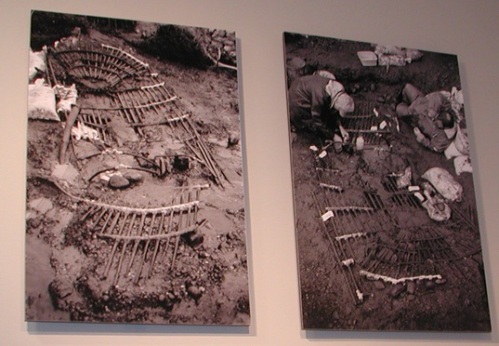 In 1989 a nearly complete fish trap was found in Montana Creek, near Juneau Alaska in Aak’w Kwáan Tlingit territory. The cylindrical trap, measuring 3 metres long and 1 metre in diameter, was excavated and found to date to about 600 years ago.  The trap was preliminarily reported in Kathryn Bernick’s 1998 book Hidden Dimensions (UBC Press).  Fishtraps were supported by wood and/or stone weir structures which also  act to direct fish into the trap.  The trap would be removed at the end of each season and stored nearby or at camp.  Of course, being wood, they intrinsically don’t preserve very well except in anaerobic and wet conditions.  They are therefore rather rare since they would need to be left in the creek after use in order to preserve.  So this one is very unusual, and especially so since it was essentially complete (other than being flattened).  All credit to the finder, Paul Kissner, for being alert, recognizing the trap, and reporting it promptly.

But now, the fishtrap has become very much a living object. 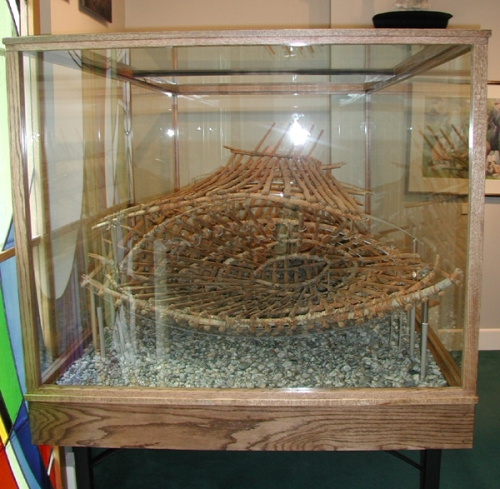 Montana Creek fishtrap on display, after conservation. Trap shape has not been fully restored to cylindrical original. Source: Sealaska.

After extensive conservation (very detailed account here), the trap is now on display at the Juneau Museum.  A very informative brochure can be downloaded from the Juneau Library (PDF) describing the trap, and Sealaska Corp. has a very good photo gallery as well.

It is also of interest that a full-scale, detailed replica was made by Steve Henrikson  and Jan Criswell using traditional methods and material.  This replica is also on display in Juneau.  There is a nice slideshow with commentary (autoplays sound) on the construction of the replica.

Some of the details of the trap are remarkable and highly informative, I suspect, for the whole Northwest Coast: the multiple details of the means of attachment of the split hemlock ribs/staves to the spruce branch hoops using split spruce root twine is remarkable.  Also – the trap is huge, but the entrance is narrow.  Montana Creek currently supports Chum, Coho and Pink Salmon, as well as Dolly Varden – the trap may have been selecting for the smaller species.