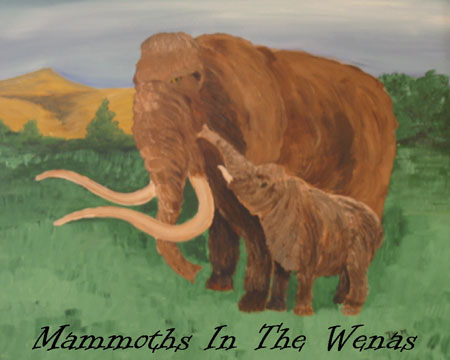 For the past few years, students and faculty from Central Washington University have been excavating terminal Pleistocene fauna, including a partial mammoth skeleton, from the Wenas Creek area just north of Yakima (map), and they have a nice website documenting their work.  Radiocarbon dates on the mammoth came back at 13,400 and 14,000  radiocarbon years ago, or about 16,000 calendar years ago.  Too old for archaeological interest!  Right?

Flake FS261, found (sort of) associated with Mammoth. Source: Lubinski et al. 2009; I tweaked the colour balance.Scale bars are one cm. each

Well, probably.  But the fact is, three chert flakes have been found in the dig, two of which are fairly conclusive looking, and one of which has pretty good provenience.  The preliminary report authors (Lubinski et al 2009; download PDF) are admirably restrained about the associations and even the artifactuality of these flakes, and more power to them for that.  Nonetheless, the picture above shows a pretty plausible chert flake (see also: Current Research in the Pleistocene, 2009; PDF).  Vertically, this flake was found 15 cm above the mammoth bones.  However, we know that stratigraphy does not always lie horizontally, and when the backplot is considered (below) then we see a much more likely association between the mammoth, a probable Bison antiquus,  and the flake. A luminescence date on Unit II sediments came back at 14,000 +/- 1,000 years ago. As you can see, the overlying unit is loess, likely the result of terminal Pleistocene deglaciation processes. The luminescence dates and radiocarbon dates (five altogether) are in stratigraphic order and the geoarchaeology seems right, and tight.

So: much too early to make a big deal of this find, which is still unfolding – faunal analysis is incomplete and the project may only now be zeroing in on the cultural component.  The timing is a bit early even for my comfort zone, but we do know the coastal route would have afforded access by about 16,000 calendar years ago, after a time when Vancouver Island and Puget Sound were briefly over-run by ice about 17,500 to 16,000 calendar years ago (Puget Sound animation – dates are calendar years BP).  The site location on the eastern slopes of the Cascades would imply people crossing a major pass quite early – or, with glacial down-wasting being a top-down process, perhaps the mountain ridges formed viable corridors at that time.

Still, quite exciting as paleontology at least, and it seems they are running their field school again this summer, so go sign up and report back in August.  There’s another good writeup here, which gives a flavour of the dig and some more pictures; on the left hand of the CWU page there are links to project videos as well.

Update: I just noticed that the owners of the property, Doug and Bronwyn Mayo, who have been very co-operative with all aspects of scientific research, also have a web site about the mammoth and you can buy some very nice Wenas Mammoth merchandise from them.