"Progressive Victoria" about to run over the Songhees. Was there ever a Songhees man with feathers in his hair, fringed buckskin, and a peace pipe? Source: Vincent's Victoria.

I mentioned it in a comment the other day so you may have seen it already, but there are a couple of great posts at the blog “Vincent’s Victoria“.  The first post is the already-mentioned review of John Lutz’s talk “Getting the Indians Out of Town: Race and Space in Victoria’s History” – Victoria, British Columbia, that is, better known as World Headquarters to this blog.   In Vincent’s post we find out about the slow process by which First Nations had their presence in the city core steadily reduced, mainly by moving the reserves, but through other means too.  The post then discusses the “Signs of Lekwungen” project which I posted on before. it’s really a shame I didn’t hear about John’s talk until after he had given it – there are other talks in the series but his would have been the most interesting to regular readers here.

The second post is extremely interesting, as it uses editorial cartoons from the Victoria Daily Times newspaper to tell the story of the movement of the Songhees reserve in 1910.

He writes: This second map [of the reserves] appeared along with the text of the agreement that finalized the new reserve and the signatures of the major parties involved in the negotiations. One of those signatures is that of J.S.H. Matson, proprietor and editor of the Colonist. Clearly, powerful business interests were aligned with the process of moving the Songhees away from prime harbour front real estate. (The existing “I.R. [Indian Reserve],” adjacent to the new one, is that of the Esquimalt Band.)

Four editorial cartoons from the Colonist‘s then rival, and more recent merger partner, the Victoria Daily Times, show how these economic interests were constructed by the media. They were published a few months earlier, in May 1910, when negotiations were beginning in earnest. The first shows “Progressive Victoria” driving an automobile down a road, threatening the Songhees man seated in its way and yelling “Out of the Way!”

The blog entry is an insightful glimpse of the tension between superficial and condescending rationalisation among the settler population, and the underlying racism which saw First Nations as an obstacle to progress.  The cartoons even bring in early settlers of African descent, and not in a favourable way.  The posts cast bright light from a new angle on the question of why there are condominiums called Songhees on the west side of the Blue Bridge, where once there were people called Songhees.  It’s a good and catchy way to engage with history, through the lens of the “small things forgotten” which are also the domain of archaeology.

While we are on the topic of Victoria History, might as well check out John Lutz’s “Victoria’s Victoria” including a good slide-show of historical images.  I mentioned before that there are some excellent, high-resolution historic maps and images of Victoria online.  Unknown Victoria is another eclectic Victoria blog with some good historical entries, this one for example on Knockan Hill.  Wharf Street 1881 does what it says. Alternative Walking Tour is radical.  What the heck, no harm done letting you know, UVIC has an open directory of some of this stuff.  Bad web practice, I guess, but no biggie.

Of course, if you are interested in the interface between history and archaeology in Victoria, you can do no better than getting a copy of “Victoria Underfoot“, and account of the city’s archaeology (and not to be confused with Underground Victoria).

Anyway, Vincent’s Victoria may well have more posts of interest, so if you find some, put them in the comments.  It is an eclectic blog, well-written and lively, by a visiting student to Victoria, Vincent Gornall, and his imaginary wife. 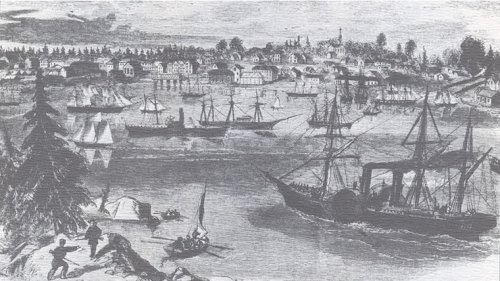 One response to “Victoria’s history through cartoons”