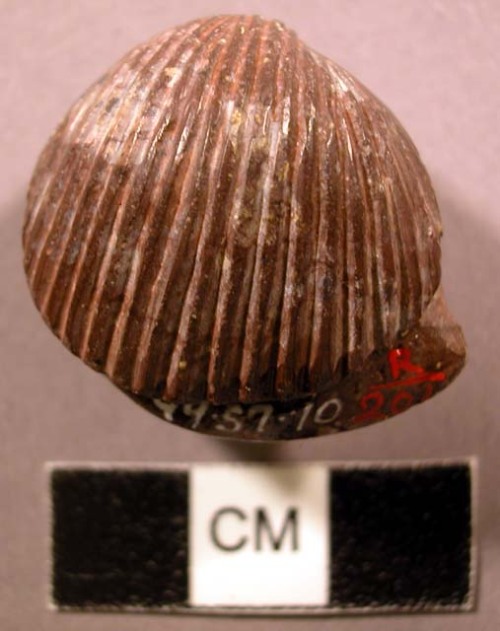 The Peabody Museum at Harvard has a predictably great collection from the Northwest Coast.  I’m more drawn to the archaeological-type artifacts vs. the masks and baskets and argillite, but fill your eyes with the charming Haida carving of a cockle, above, collected in “Massett Bay”.

One nice thing about this collection is the accession ledger is also scanned in and made available.  For example, if you go the the page for the cockle above here, you can click on the cockle picture for a higher resolution, on the first ledger page for the left hand side of the ledger book, and on the second for the right hand side.  It is possible in this way to do some ad hoc fact checking of their descriptions to finding additional information. For example, the cockle’s second page contains the notation “taken from the interior of R/200”.  Accession number R/200 turns out to be this unusual ?argillite carved box with inlaid shell.

Some of the other objects are equally unusual – I’d say there are more “wow – never seen one of those before” moments in this collection than any other I have seen.

The above items are two nice utilitarian tools from Haida Gwaii, the bark peeler donated by one J.G. Swan.  You can use the search form to find items: if you search under “Who” using an ethnolinguistic term (e.g., Haida) it works well for the Northwest Coast; you can also search by keyword, often with many more hits.  When you get the list of search results, you need to click on the text, not the picture, to go to the accession record.  Then, as noted above, you need to click on the picture (even though the cursor does not change when you hover over it) to get the higher resolution.  It’s a good system and the links are stable, but the fact I have to explain it suggests it could be better designed.  Also, while individual objects can be linked with stable URLs, searches cannot be. 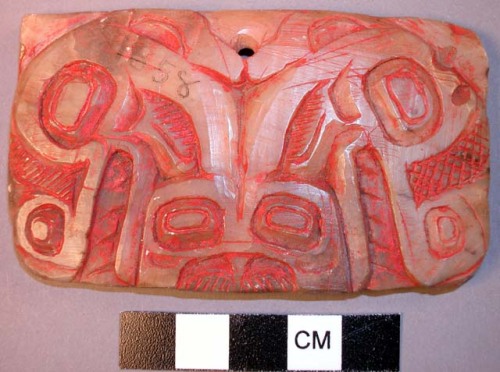 But you didn’t click on “read more” to see bark peelers.  One of the most unusual objects I have ever seen from the Northwest Coast is shown above.  While the web page describes it as “Tlingit?  Haida?”, the ledger book describes it as “Stone ornament – Haidah (Emmons)” which makes it seem initially likely to be Kaigani Haida — a branch of the Haida Nation who live on Prince of Wales Island in Alaska, where Lt. Emmons worked.  However, the ledger goes on to read “the stone is probably Chinese, and imported to the Queen Charlotte Islands by traders”, which suggests Haida  Gwaii origin.  I don’t know on what basis the stone is said to be imported other than it is a very unusual medium for NW Coast stone carving (it looks like alabaster?) and overall it is an extremely rare and enigmatic carving.  And is it really just a “bear” — aren’t those flukes in the bottom centre, meaning this is a sea-bear or Wasgo?

In other cases, the ledger book is able to clarify vague descriptions, such as the above digging stick which is described on the web as Salish-Puget Sound but this is clarified in the ledger to the Skokomish Tribe. 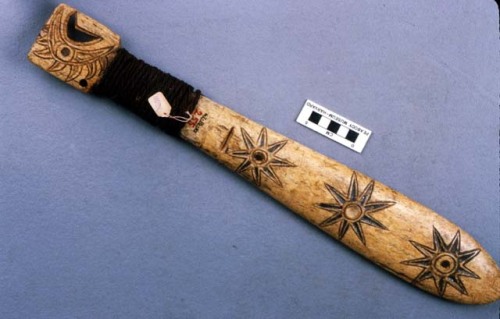 There is a huge collection of ethnographic objects at the Peabody and almost all of these were unfamiliar to me, such as the spectacular Nuu-chah-nulth club, above, or the even more unusual and spectacular club below.    The search interface is quick and efficient though not entirely transparent or intuitive.

Anyway, it’s a good place to spend a few minutes browsing – post your faves in the comments!  (limit two links per comment or you get Spam-canned)