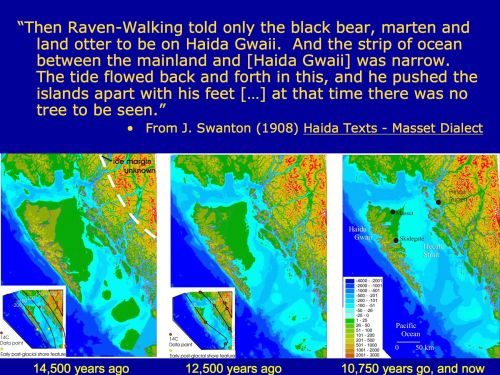 1.  About 14,500 calendar years ago it was a temperate tundra environment, with no trees.  The first trees, pine, appear about 14,000 years ago and there is progressive forest infilling thereafter, with the modern species mixture in place by about 3,000 years ago.

2. It has an impoverished suite of large land mammals – historically, these were limited to black bear, caribou, marten, ermine, a vole and a shrew.  We know that 13,000 years ago there were also deer and brown bear on the islands, and quite likely other species as well.

3.  It used to be much larger than in the present.  With lower sea levels at the end of the last ice age, Hecate Strait was largely dry land, exposing a large, unglaciated, coastal plain that became rapidly flooded.

It seems to me that we can add a fourth thing we know:

4.  The Haida have oral history which tells of events that happened on this drowned grassland.  The above excerpt from the well-known Raven-Travelling or Raven-Walking origin stories tell of a time of transformation, as Raven-Walking made the world the way it is – a coming-into-being of Haida Gwaii.  The congruence of the geological and oral historical information leads me to conclude that Haida storytelling extends to the terminal Pleistocene and thus spans more than 14,000 years of the history of these islands.

Where else in the world can this claim be made so solidly? 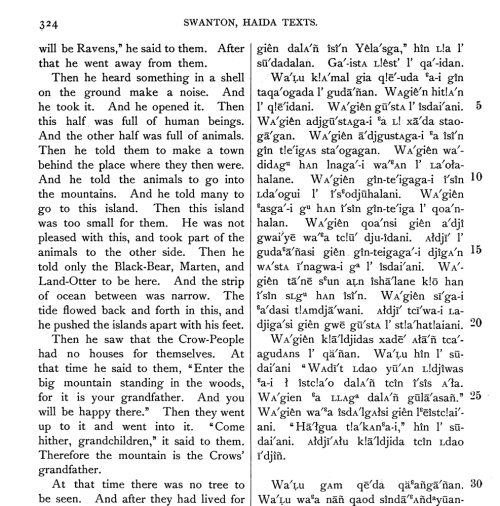 In the above excerpt, note that this is also the time of human emergence from the cockle shell at NaiKun, or Rose Spit, firmly placing these events at the “beginning of time”.  The Haida emergence is one of the best known events in Haida history, being immortalized in a famous Bill Reid sculpture which also figures on the Canadian $20 bill.  If you are wondering, the current earliest archaeological evidence for human occupation of Haida Gwaii comes from a series of karst cave excavations I worked on with Daryl Fedje and others: these solidly place people on the islands by at least 12,750 calendar years ago – a frame I expect to become even older as our research grunts along. 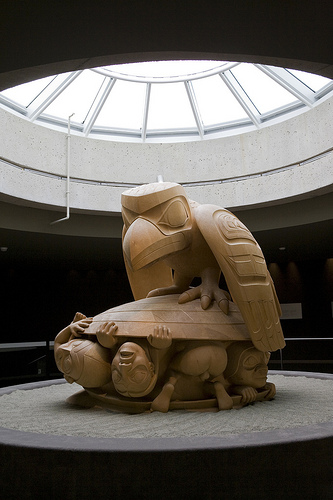 Raven and the First Men, by Bill Reid.