Mechanical representation in a Haida Pipe 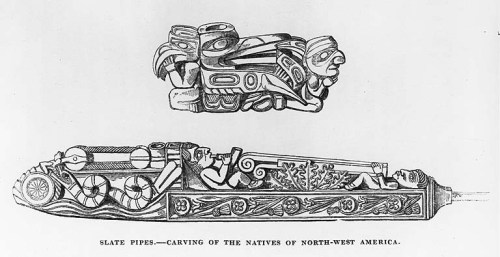 Haida Pipes, 1837. From U. Washington Collection.

I don’t know much about these early historic Haida argillite pipes.  These ones are illustrated in Edward Belcher’s Narrative of a voyage round the world, 1843, v.1, p. 309.  The lower one captured my attention, with its representation of a conveyor belt (?!) – or, more likely, a block-and-tackle/pulley setup.  The playful seriousness of these pipes is astounding – as can be seen in my earlier post on the SS Beaver pipe.  I would like to see a photograph of this one but I have no idea where it may have ended up.

The image is via the superb University of Washington Digital NW collections.

One response to “Mechanical representation in a Haida Pipe”