We’re a little obsessed with wooden architecture in the NW Coast archaeology world – with good reason, I guess, since monumental wooden houses are such a prominent feature of the recent past. I suppose we sometimes stereotype these houses a little – a point some commenters made in the Houses on Stilts post here a while back – we think: “large rectangular house squatting in midden supported by giant house posts.” Not always the case, certainly not through time.

In general, we may underestimate large scale constructions in stone.  Burial cairns and mounds (one of Darcy’s consists of 18 dump-trucks worth of soil), rock wall defensive sites, trench embankments, canoe runs, fish traps, and of course, clam gardens, all involved massive deployments of stone, with associated labour investments and creation of a durable built environment. Anyway, we’ve recently been running into enigmatic rock structures on the central coast and Quadra Island, and in particular, the possibility of dwelling structures partially based on stone walls.  So it’s quite cool to run across the picture above from the SHI photo collections, showing a Taku Tlingit house from the historic period, sitting on a platform which has a stone wall as a foundation. 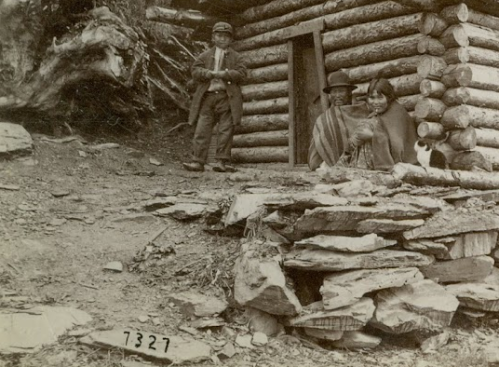 Detail of Taku Tlingit stone foundations. You don’t see that many cats in historic pictures on the NW Coast.

It’s obviously a historic era structure – sawn logs, log-cabin style, fairly new at time of photography around 1887. The house to the right shows a more traditional style structure, while the one in the upper left is more of a western clapboard house. But all the same, the rough, yet sturdy, drystone wall is supporting a fairly large terrace cut into a steep slope and is quite educational from the perspective of expanding our range of mental models of what could be associated with NW Coast houses. I’m also looking at the upside down stump embedded in the bank to the left.  Is that part of the terracing? 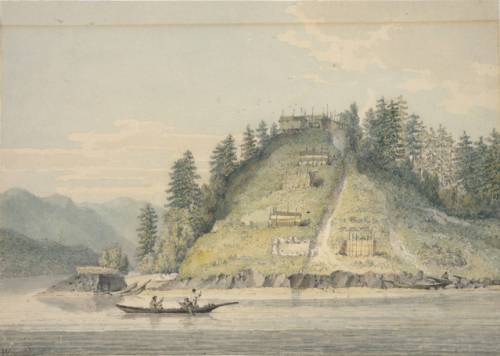 Village of the Friendly Indians near Bute’s Canal. Watercolour by William Alexander. Source: University of Illinois.

Multi-row houses on steep slopes are fairly well known on the NW Coast: see the picture above of one from Homalco Territory from the previously mentioned Houses on Stilts post. But even gentle slopes would have asked for levelling, perhaps.  And what would be the reaction of hitting a pile of rock slabs in the bottom of a one metre square unit?  Probably it’d be interpreted as the bottom of the interesting stuff and an indicator of sterile.  Hard to shovel into, for sure! But the typical scale of NW Coast archaeology (big, big, complex sites and relatively small, small holes) often makes it hard to imagine really getting a handle on architectural details.

For an archaeological example, above is a picture of a rock wall which happened to be exposed in a tiny rivulet.  The wall itself is partially constructed of large stone tools, which is cool in its own right. It continues out of frame to right and left, but is not exposed in the same way. Behind the wall, a small test unit showed the stone structure three courses deep, with a definite edge, and abundant charcoal and lithics organized into thin strata like living surfaces.  Preliminary dating shows use around 1500 years ago. Anyway, it’s an example of what we think may be a habitation structure of some kind built on a stone foundation, perhaps even with low stone walls as a perimeter.  You can see numerous additional examples of similar walls in the pictures below, also from the SHI archive. 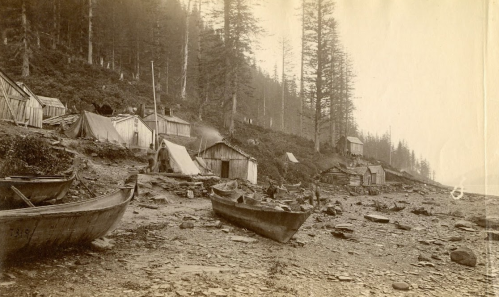 It’s also not just about houses. Above and below you can see rock platforms built to support tents; in the lower case these are in the uppermost intertidal or immediate supra-tidal zone.  The bottom picture shows a similar uppermost tidal rock platform which contained abundant charcoal dated to, if memory serves, to about 4,000 years ago.  This is from Duncan McLaren’s Hakai Ancient Landscapes project which I get to volunteer on from time to time.

So, stone: an under-appreciated construction material on the NW Coast?  If you have examples of unorthodox stone constructions then leave a comment, or send me an email.