Tim Heaton at work in OYK cave. Screenshot from video.

On July 4, 1996, paleontologist Tim Heaton was busy at his last day of fieldwork at On-Your-Knees Cave on northern Prince of Wales Island, Southeast Alaska (map).  At this and other caves Heaton had recovered a remarkable array of fauna from both before, during, and after the last glacial maximum, including a variety of black and brown bear bones.  Until this point, he had not found any human remains, but that changed with the discovery of a human mandible and the subsequent discoveries of other scattered, chewed remains.  In due course, an archaeological site was also found at the entrance to the cave, dating to about 10,300 calender years ago, the same as the human remains. Excavation at this site was led by E. James (Jim) Dixon, whose footsteps I often feel like I am stumbling along in. In one layer in the site, they actually found one of the missing teeth from the mandible, showing the extent to which the bones had been scattered, and, sinisterly, chewed, presumably by bears.  The most likely interpretation is that the site represents a bear hunting camp at the entrance to the cave, and that on at least one occasion, the bears got the upper hand.

Anyway, the remains of this young man have revealed important details of the life of early people on the Northwest Coast, and the study also exemplifies how strong relationships, respect, and adherence to protocol can allow for scientific and cultural priorities to unfold together. It’s therefore quite exciting to find a 30 minute video detailing the process of research at On-Your-Knees Cave: “Kuwoot yas.ein: His Spirit is Looking Out from the Cave“.

The two most important findings of the bioanthropology research include extraction of DNA from one of the man’s teeth, and isotopic analysis of his diet from samples of his bones. 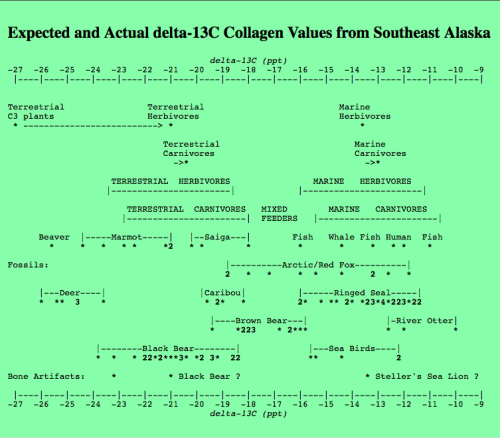 As they say, you are what you eat, and certain isotopes and trace elements from your bones can reveal your diet – in the case of bones, probably a decadal scale, whereas your hair encodes a much more fine grained record of diet as it grows.  In any case, the take-away message from the young man’s bones was that his diet was almost exclusively marine in origin.  As you can see in the above picture from Tim Heaton’s excellent website, the human signature is mixed in closely with marine carnivores and fish. Further work could reveal (or may already have done so) whereabouts on the food chain the man fed — i.e., eating marine plants, fish, carnivores, etc. From this we can lay down a solid baseline that at least one individual was a full-time marine specialist, and presumably  equipped with boats, harpoons, fishing lines, and all the other paraphernalia of the coastal life.  At the time, in the 1990s, there was still doubt about this in NW Coast archaeology, where a longstanding model of early terrestrial peoples slowly become more and more fluent in marine resources held sway, with full-time marine specialists only emerging around 5,000 years ago.  In subsequent years, discoveries at sites like Kilgii Gwaay showed the advanced maritime capacities of these early coastal people. While one can argue that this is just one individual, since he was a young man, we should reflect on the maxim that “it takes a village to raise a child”.  I doubt this was some singularly fussy child who was refusing his delicious terraburgers.

The other finding, in a paper by Brian Kemp et al., is that the man belonged to maternal (mtDNA) haplogroup D and paternal (Y-chromosome) haplogroup Q-M3. While rather difficult to grasp as a non-specialist, Kemp’s study showed that the individual placed most closely to others (living and dead) who are concentrated along the Pacific margins of both North and South America, as well as some East Asian individuals, with suggestive implications for the First Peopling question in the Americas.

Tim Heaton at work in a cave on Haida Gwaii – I certainly enjoyed working with Tim on a project, learned a lot, and was impressed muchly by how much he could carry uphill or down! If I recall correctly, the artifact found in this site also emerged on the last afternoon in the field, in Tim’s screen.  Source: qmackie.

But the main virtue of the video is that it shows how closely the Tlingit and Haida populations of Prince of Wales Island were consulted and involved and took ownership of the research process. It’s another great video, like the Hagwilget one from the other day here, which could inspire archaeology students to fully recognize the importance of their work being grounded in communities.  Without pre-existing protocols, it seems these remains would have been hastily reburied.  With a framework of trust, then discussions could take place and common ground established, ably expressed by all sides in the video, produced by the Sealaska Heritage Institute. Students can then see that respectful work can lead to scientific opportunity, and not the shutdown of the discipline which some of them apparently fear.

As one of the Tlingit partners, Linda Blankenship, says in the video, she came to see the process of studying the man as one of learning from a Great-Great-Great Uncle.  It certainly hasn’t always been the case that human bones have been treated with respect by archaeologists – the opposite is actually true.  Indeed, just a few weeks after these discoveries, attendees at a hydroplane race in Washington State found human remains that became known as Kennewick Man, and some rather inept and fumbling initial work by Anthropologists led to an enormously divisive and bitter wrangling which continues to this day.  In one case, the discovery of human remains led to collaborative research, consultation, sharing results “locally before globally”, training of interns,  and an eventual state of closure. In the other case, the opposite.  Both outcomes are largely within the control of archaeologists, a lesson which we are increasingly, if imperfectly, taking to heed. 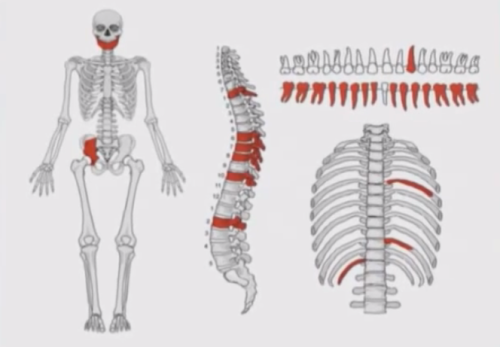 The inventory of human remains at On-Your_Knees Cave: not much left behind by the bear. Screenshot from video.

One response to “Kuwoot yas.ein – A video about the discoveries at On-Your-Knees Cave, SE Alaska”