Tagging along with Archaeologists in Quatsino Sound 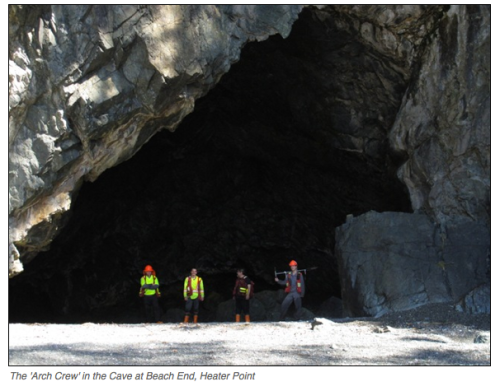 How does the general public perceive archaeologists?  There’s a lot of ways to get at this question, not least the comments section of any newspaper article!  But a positive and slightly unusual perspective is found in this article by Stephanie Meinke at the BC Marine Trails website.  In the course of establishing some new marine trails in the Quatsino Sound area of NW Vancouver Island (map), concern arose that there might be archaeological sites at some of the campsites. Kayakers generally having solid ethics about leaving no trace, but all the same there might be some unintentional impacts.  So an archaeological consulting team (Kennedy Richard and Morgan Bartlett) was hired to assess these spots with potential impact. They were guided by Stephanie and by Janis Leach of Recreation Sites and Trails BC, as well as by two field assistants from the Quatsino First Nation: Mark Wallas and Mark Hunt.

The article gives something of a participant-observation view of the archaeological consulting business in its coastal survey guise, as well as some nice pictures of gorgeous scenery. 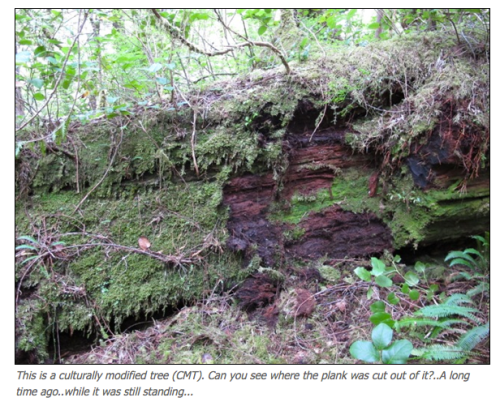 In the picture above you can see how the normally-round cedar log has something of a square face, and to the right there is a shiny black area.  The square face is produced by removal of one or more planks from this tree.  The black marks (of which there would be more under the moss below) are facets left by woodworking tools – chisels, adzes or axes, depending on the time period.  Planks of course were extremely important for First Nations, primarily as the lumber their longhouses were made from. While the caption says this tree was planked while it was alive, in most cases these planked logs are on trees which are felled for the purpose, or on natural windfalls.  Such planking can be given a minimum date by tree ring counting of any small nurse-trees growing on the fallen log. There’s an older but good report on CMTs written by archaeologists Arnoud Stryd and Vicki Feddema available from the Suzuki Foundation, if you’re curious about these features which, unusually for archaeological sites, are often alive.

Meanwhile, below, you can see a typical scene of coastal archaeology.  Shovels, bucket-augers, and soil probes are commonly used on flat places like this to detect shell middens.  Older middens may have quite a bit of natural soil development on top of them – a metre is common – and perseverance is needed to feel confident that a nice flat spot like this does, or does not a midden underneath.

Anyway, it’s a fun article, and while the author doesn’t report on any shenanigans you do get the sense of how the often backbreaking work of coastal survey is coupled to the remarkably beautiful places one is privileged to visit.  This can produce giddiness, in my experience.  And, nicely in this case at least, the objective is relatively benign and the sites are not under much threat. 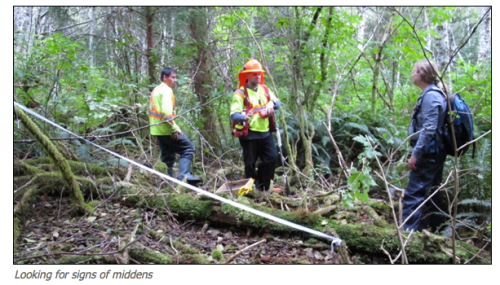 11 responses to “Tagging along with Archaeologists in Quatsino Sound”