In many parts of Northwest North America glaciers and ice patches are melting at unprecedented rates.  In some cases, these are revealing extraordinary archaeological remains, as I have noted before for Alaska.  There’s recently been some short news reports about new finds in the Northwest Territories, to add to the substantial work already done there.  Most of these reports rehash the same news release from the Arctic Institute of the Americas, which sponsored the research through International Polar Year funding (now ended).  Only a few sites have photos, though. 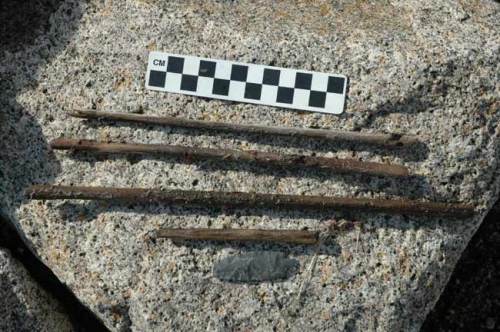 The photo above shows an arrow, made of birch wood, dated to 270 years ago.  it is said to be an arrow because of the slot-shaped nock in the upper-left hand fragment, which would have coupled to a bow string.  The stone point in the foreground seems very large to be an arrow head, to me, and I wonder if it was firmly associated with the arrow shaft.  The article doesn’t say.

Because so much of the commentary I have seen (thanks, again, CBC) seems extremely confused, it is important to note that these artifacts were deposited on ice in the first place, by hunters who were targeting caribou.  Caribou shelter from heat and insects on ice patches, but in so doing expose themselves to human predation.  So let me just state clearly here:  this evidence does not somehow disprove  global warming.  Indeed, it is evidence for the exact opposite: the fact that such artifacts can be over 8,000 years old and are only now being released from the ice on which they were laid, is itself strong evidence that the current melting regime is unprecedented in the Holocene.

You can listen to an interview with NWT Archaeologist Tom Andrews by downloading this mp3 file from the CBC radio show “As it Happens” – the interview starts at 27:10 of the 45 minute show.  I see you can also buy a splendid-looking, illustrated book on NWT ice patch archaeology by Andrews, Leon Andrew, and UVIC’s own Glen MacKay.

In the previous posts on this topic – Alaska and B.C.’s Tsitsutl Glacier find from the 1920s – a good discussion broke out about why there is essentially no research of this kind going on in B.C.  The fattest target is B.C. Parks, whose vast Alpine and sub-Alpine lands go with no discernible archaeological management of any kind.  This is not a question of funding research – this is heritage conservation within Parks which were designed and mandated to do exactly that.  Once again, I call shame on the B.C. Parks system for their inadequate attention to the archaeology they have been given a custodial duty towards.  Wake up, B.C. Parks: you have multitudes of highly threatened archaeological sites and you must act now.  Contact them:  parkinfo@victoria1.gov.bc.ca or better yet, why not email the Minister responsible the Honourable Barry Penner at env.minister@gov.bc.ca .  It would be interesting to have them on record as to how they see their responsibility towards these sites.  Right now their actions speak for themselves: They. Do. Not. Care. Indeed, now I wonder if the Heritage Conservation Act contains any levers which could be applied to press them into action.

Here is the text of the press release:

YELLOWKNIFE, NT – APRIL 2010 – High in the Mackenzie Mountains, scientists are finding a treasure trove of ancient hunting tools being revealed as warming temperatures melt patches of ice that have been in place for thousands of years.

Tom Andrews, an archaeologist with the Prince of Wales Northern Heritage Centre in Yellowknife and lead researcher on the International Polar Year Ice Patch Study, is amazed at the implements being discovered by researchers.

Ice patches are accumulations of annual snow that, until recently, remained frozen all year. For millennia, caribou seeking relief from summer heat and insects have made their way to ice patches where they bed down until cooler temperatures prevail. Hunters noticed caribou were, in effect, marooned on these ice islands and took advantage.

“I’m never surprised at the brilliance of ancient hunters anymore. I feel stupid that we didn’t find this sooner,” says Andrews.

Ice patch archeology is a recent phenomenon that began in Yukon. In 1997, sheep hunters discovered a 4,300-year-old dart shaft in caribou dung that had become exposed as the ice receded. Scientists who investigated the site found layers of caribou dung buried between annual deposits of ice. They also discovered a repository of well-preserved artifacts.

Andrews first became aware of the importance of ice patches when word about the Yukon find started leaking out. “We began wondering if we had the same phenomenon here.”

In 2000, he cobbled together funds to buy satellite imagery of specific areas in the Mackenzie Mountains and began to examine ice patches in the region. Five years later, he had raised enough to support a four-hour helicopter ride to investigate two ice patches. The trip proved fruitful.

“Low and behold, we found a willow bow.” That discovery led to a successful application for federal International Polar Year funds which have allowed an interdisciplinary team of researchers to explore eight ice patches for four years.

The results have been extraordinary. Andrews and his team have found 2400-year-old spear throwing tools, a 1000-year-old ground squirrel snare, and bows and arrows dating back 850 years. Biologists involved in the project are examining dung for plant remains, insect parts, pollen and caribou parasites. Others are studying DNA evidence to track the lineage and migration patterns of caribou. Andrews also works closely with the Shutaot’ine or Mountain Dene, drawing on their guiding experience and traditional knowledge.

“The implements are truly amazing. There are wooden arrows and dart shafts so fine you can’t believe someone sat down with a stone and made them.”

Andrews is currently in a race against time. His IPY funds have run out and he is keenly aware that each summer, the patches continue to melt. In fact, two of the eight original patches have already disappeared.

“We realize that the ice patches are continuing to melt and we have an ethical obligation to collect these artifacts as they are exposed,” says Andrews. If left on the ground, exposed artifacts would be trampled by caribou or dissolved by the acidic soils. “In a year or two the artifacts would be gone.”