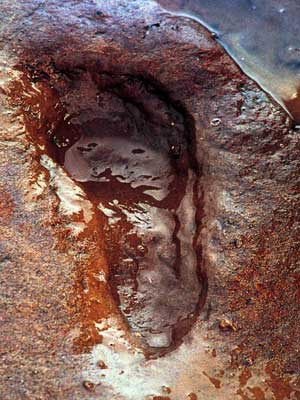 I know of three sites in the world where human footprints more than 5,000 years old are preserved in the intertidal zone: one in Northwestern England, and two in Southeastern Argentina.   These are exceptionally fragile sites – the English ones are often only visible for a single tide cycle.  All three sites find humans co-occurring with other species – Aurochs, canids, birds in England, and a large variety of fauna in Argentina, including extinct megafauna such as giant ground sloths (in both bipedal and quadruped mode) and glyptodonts (a sort of giant armadillo) among other species.  The prints range from single impressions to the trails of individuals walking or running, to clusters of several hundred distinct prints of all ages, to the distinctive prints of playful, gambolling children.

The English case is at a place called Formby Point, where more than 150 trails have been found, dating to about 6,000 years ago – the Neolithic.  Many deductions have been made from these prints, including those of pregnant women, those of people with bursitis, and even one individual with poorly trimmed toenails.  You can see a short video here which gives a good sense of the formation and preservation of these prints, and there are some colour pictures here, including one of a plaster cast being inspected by a local podiatrist.

At Monte Hermoso on the southeastern shore of the Pampas of Argentina, hundreds of human footprints date to about 7,800 calendrical years ago.  At this site, the human footprints are in association with Rhea prints, the large South American flightless bird. 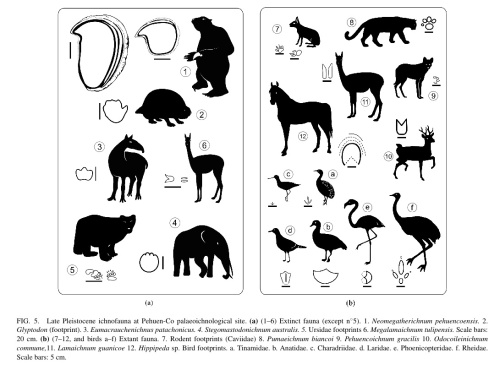 Click to enlarge. The various fauna present at the 13,900 year old Pehuen-Co footprint site, Argentina - the authors assume you know what a human profile looks like! Source: Aramayo and de Bianca, 2009.

Most remarkable is a newly reported site, Pehuen-Co, about 30 km south along the coast from Monte Hermoso.  At this site, a bewildering array of extinct megafauna prints are visible in sediments dating to 13,900 calendar years ago.  Among these prints are a few human prints, in the same sedimentary units (though so far only found on dislodged blocks) – making this one of the oldest known archaeological sites in South America,  just a few centuries more recent than Monte Verde.

It is hard not to start imagining places where similar landforms on the Northwest Coast might reveal comparable footprints and trails.  It would be so easy to miss such sites, since the assumption would be so easy to make that they could not possibly be very old, if they were even noticed at all.  In other words, another example of finding what you are looking for!  I knew about the Monte Hermoso site for some time, having worked in Argentina soon after their discovery.  But finding the other sites was a nice surprise stimulated by the discovery of an unusual peer-reviewed scientific journal: Ichnos: An International Journal for Plant and Animal Traces – the 2009 (1) volume of which focused on hominid footprints. 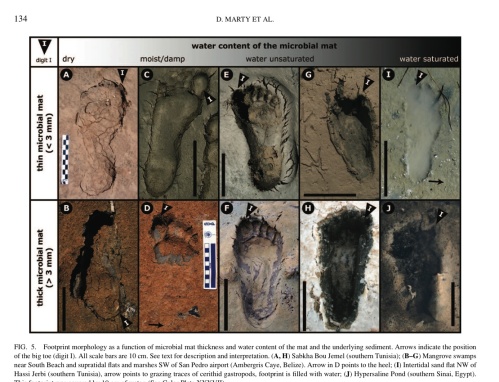