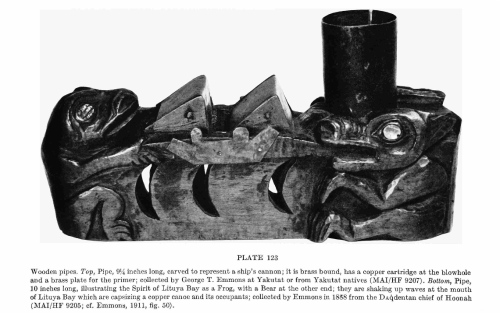 My recent post on the 1786 visit by La Perouse to Tsunami-prone Lituya Bay, Alaska sent me scurrying to download the massive ethnography by Frederica de Laguna entitled Under Mount St. Elia Under Mount Saint Elias: The History and Culture of the Yakutat Tlingit.  As expected, there is a rich oral history of waves in this bay.  From Volume 1, page 94, she says

Emmons (1911, p. 295) recorded Indian beliefs about the dangers of Lituya Bay, caused by:
“… a monster of the deep who dwells in the ocean caverns near the entrance. He is known as Kan Lituya, ‘the Man of Lituya’ [qa htu ‘a?]. He resents any approach to his domain, and all of those whom he destroys become his slaves, and take the form of bears, and from their watch towers on the lofty mountains of the Mt Fairweather range they herald the approach of canoes, and with their master they grasp the surface water and shake it as if it were a sheet, causing tidal waves to rise and engulf the unwary.

De Laguna then continues to discuss an extraordinary wooden smoking pipe, illustrated above:

“This legend of Lituya is illustrated by a carved wooden pipe (fig. 50) [pi. 123], of splendid proportions, which was obtained in 1888 from the chief of the Tuck-tane-ton family of the Hoon-ah Kow [DAqdentan sib of Hoonah], who claimed this bay as his hereditary sea-otter hunting ground. It was used only upon occasions of particular ceremony—when the clan assembled to honor the dead, or to deliberate upon some important question of policy. At one end is shown a froglike figure with eyes of haliotis shell, which represents the Spirit of Lituya [possibly the Frog crest of the sib?], at the other end the bear slave sitting up on his haunches. Between them they hold the entrance of the bay, and the two brass-covered ridges are the tidal waves they have raised, underneath which, cut out of brass, is a canoe with two occupants, that has been engulfed. [Author’s note: This illustration was furnished through the courtesy of Mr George G. Heye, in whose collection the pipe now is.”]

One thng leading to another, I thought I would look into whether the Tlingit story of La Perouse’s visit had been passed on.  As it turns out, the early ethnographer G.T. Emmons records an account given by a Tlingit chief one hundred years after the visit of La Perouse to Lituya Bay.  This gives an indigenous perspective on what must have been an extraordinary series of events for both parties.  This account is well worth reading, so I am reproducing a portion of Emmons (1911) rendering below:

“In 1886, one hundred years after [the vist of la Perouse], Cowee, the principal chief of the Auk qwan of the Tlingit people, living at Sinta-ka- heenee, on Gastineaux Channel, told me the story of the first meeting of his ancestors with the white man, in Lituya Bay, where two boats of the strangers were upset and many of them were drowned. This narrative had been handed down by word of mouth for a century. These people possess no records nor had the chief, who spoke no word of our tongue, ever heard of La Perouse from outside sources; so we can here authenticate by an exact date a most interesting piece of native history in detail, the truth of which is substantiated by the fact that La Perouse was the only one of the early navigators to visit this locality in a large ship and by the attending loss of life in the destruction of his two boats.  Before the coming of the white man, when the natives had no iron, the Chilkat and Hoon-ah made long canoe trips each summer to Yakutat, to trade with the Thlar-har-yeek for copper, which was fashioned into knives, spears, ornaments, and tinneh 1 and which again were exchanged with the more southern tribes for cedar canoes, chests, food boxes, and dishes. One spring a large party of Thluke-nah-hut-tees from the great village of Kook-noo-ow on Icy Straits, started north, under the leadership of three chiefs Chart-ah-sixh, Lth-kah-teech, and Yan-yoosh-tick. In entering Lituya, four canoes were swallowed by the waves and Chart-ah-sixh was drowned. The survivors made camp and mourned for their lost companions.

While these ceremonies were being enacted, two ships came into the bay. The people did not know what they were, but believed them to be great black birds with far reaching white wings, and, as their bird creator, Yehlh, often assumed the form of a raven, they thought that in this guise he had returned to earth, so in their fright they fled to the forest and hid. Finding after a while that no harm came to them, they crept to the shore and, gathering leaves of the skunk cabbage, they rolled them into rude telescopes and looked through them, for to see Yehlh with the naked eye was to be turned to stone.

As the sails came in and the sailors climbed the rigging and ran out on the yards, in their imagination they saw but the great birds folding their wings and flocks of small black messengers rising from their bodies and flying about. These latter they believed to be crows, and again in fear they sought the shelter of the woods. One family of warriors, bolder than the rest, put on their heavy coats of hide, the wooden collar and fighting head-dress, and, armed with the copper knife, spear, and bow, launched a war canoe. But scarcely had they cleared the beach when a cloud of smoke rose from the strange apparition followed by a voice of thunder, which so demoralized them that the canoe was overturned and the occupants scrambled to the shore as best they could.

Now one nearly blind old warrior gathered the people together, and said, that his life was far behind him and for the common good he would see if Yehlh would turn his children to stone, so he told his slaves to prepare his canoe, and, putting on a robe of the sea otter, he embarked and paddled seaward. But as he approached the ships the slaves lost heart and would turn back, and all deserted him save two, who finally placed him alongside. He climbed on board, but being hardly able to distinguish objects, the many black forms moving about still appeared as crows, and the cooked rice that they set before him to eat looked like worms, and he feared to touch it. He exchanged his coat of fur for a tin pan and with presents of food he returned to the shore. When he landed the people crowded about surprised to see him alive, and they touched him and smelled of him to see if it were really he, but they could not be pursuaded to eat the strange food that he had brought to them. After much thought the old man was convinced that it was not Yehlh that he had gone to and that the black figures must be people, so the natives, profiting by his experience, visited the ships and exchanged their furs for many strange articles.

It was at this time that two boats were lost at the mouth of the bay and many of the white men were drowned.

You can download the three volumes of Under Mount St. Elias for free from the Smithsonian Institute.  Each link goes to a download page, not directly to the PDF itself.  Note: each file is very large.  Volume 1, Volume 2, Volume 3.

Tlingit inhabitants of Lituya Bay, 1786. Source: de Laguna, volume 3. Note the robes to the left and to the right, pieced together from small furs. Figure to the left also apparently holds a tin pan. Click for alternate, zoomable version.