Even more on the Wilson Duff – SGang Gwaay Musical 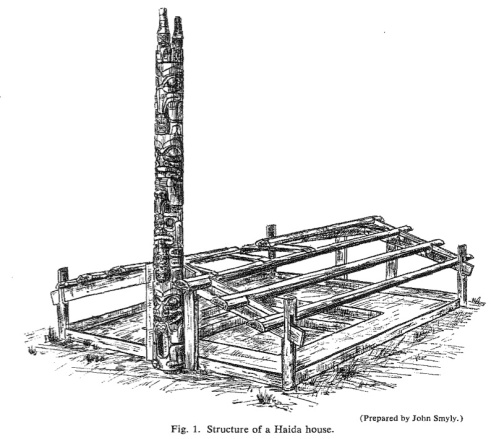 A month or two ago I made several posts (1 , 2, 3) about a forthcoming musical called Beyond Eden, which tells the story of the 1957 expedition to ‘rescue’ poles from the Haida Town of SGang Gwaay (PDF).

I notice The Tyee has a very good overview of this musical (which opens tonight) including some comments from Roy Jones Sr. of Skidegate, last seen on this blog as a young man climbing poles in 1957 CBC archival footage.  Says The Tyee:

Now in his mid-80s, he is reflective about the experience, having enjoyed the physical work and the company of members of the crew — but about cutting the poles? “It didn’t feel right,” he said. However, the Skidegate Band Council had approved the work and many felt it was the right thing to do. Further to that, Jones was on a recent trip to The Chicago Field Museum and saw one of the poles taken from Skedans (an expedition he was also on). “If they hadn’t taken it at that time, it would have been ruined, I think,” he said.

It is good to see some Haida perspective on both the events of 1957 and on this musical.  I also didn’t realize Nathalie at the Qay museum was a student of Wilson Duff’s — I’ll have to buy her a coffee and pump her for stories next time I am up on the islands. It’s a good article — The Tyee is doing some of the best journalism in BC right now.

Poster for "Beyond Eden" musical. Click to buy tickets; scroll down for title song.

As promised, I am linking to a copy of the 1957 report (PDF) by Wilson Duff and Michael Kew on the Kunghit Haida town of  SGang Gwaay, which has also been known erroneously as Ninstints. Little mention is made of the pole recovery aspect which was the subject of previous posts, though if you scroll all the way down in Duff and Kew’s article I append Duff’s report from that same issue of the “Report of the Provincial Museum of Natural History and Anthropology”.  In that report, the personnel involved are noted and there is also a discussion of  the activity of the  “B.C. Totem Pole Restoration Committee.”

Anyway, Duff and Kew describe in full the environment and setting of Anthony Island, the town site and associated archaeological sites, and also gives a full account of the early period conflict between Haida and trading ships.  In particular, vivid detail is given of the rise and fall of Chief Koyah and the serial raids he led on trading ships.  As Duff notes, this escalation in violence may well have been the resulted of an ill-advised power-play by Captain Kendrick who temporarily held Koyah hostage, a mortal insult in Haida society:

What Kendrick regarded as a simple” lesson” must to Koyah have been a monstrous and shattering indignity. No Coast Indian chief could endure even the slightest insult without taking steps immediately to restore his damaged prestige. To be taken captive, even by a white man, was like being made a slave, and that stigma could be removed only by the greatest feats of revenge or distributions of wealth. This humiliating violation of Koyah’s person must have been shattering to his prestige in the tribe. The Indian account of the incident told to Captain Gray a year later (but before Gray had heard Kendrick’s version) states this very clearly.

“On Coyah the chief’s being asked for, we were informed by several of the natives . . . that Captain Kendrick was here some time ago . . . that he took Coyah, tied a rope around his neck, whipped him, painted his face, cut off his hair, took away from him a great many skins, and then turned him ashore. Coyah was now no longer a chief, but an ‘AWiko,’ or one of the lower class. They have now no head chief, but many inferior chiefs. . . .” (Hoskins, in Howay, 1941, p. 200).

Kendrick had hurt Koyah more than he knew.  On Koyah’s part, if we understand the motivations of a Haida chief correctly, only bloody revenge or a great distribution of wealth would restore his lost prestige. To capture and destroy Kendrick’s ship, for example, and then distribute the loot, would fill the bill nicely. Koyah watched for his chance, and John Kendrick’s carelessness soon gave it to him.

END_OF_DOCUMENT_TOKEN_TO_BE_REPLACED

Yesterday I noted the upcoming musical about the Bill Reid-Wilson Duff expedition to “rescue” carved poles at the Haida Village of SGang Gwaay (Ninstints).  I’ve just found that the CBC has posted online a short documentary, (2013:edit, use this link)  first broadcast in 1959 and narrated by Bill Reid, showing the removal of these poles to the Museum of Anthropology at UVIC.  The expedition also included Wayne Suttles and Michael Kew, as well as Wilson Duff of course.  The Haida crew consisted of Roy Jones, Clarence Jones and Frank Jones of Skidegate. Some aspects of the trip are recounted in the BC Provincial Museum Annual Report of 1957, which I will scan and post some other day.

The spoken component of the documentary is a fascinating account by Reid, at that time just beginning his carving career, but the real jaw-dropping element is the depiction of the use of axes and saws and climbing spikes to log this forest of poles.  Necessary, of course, but jarring nonetheless.

A small boat ferrying Bill Reid and a team of anthropologists approaches the southern tip of the Queen Charlotte Islands. Reid documents the rescue mission to salvage and relocate the last of the crumbling Haida totems as revealed in this CBC documentary. With a sense of excited urgency, Reid describes and catalogues the enormous poles on the approaching shore. As they are gently felled, the majestic cultural landmarks will creak and groan before they are prepared for transport.

It’s low resolution and grainy, but the general impression is a very powerful one. 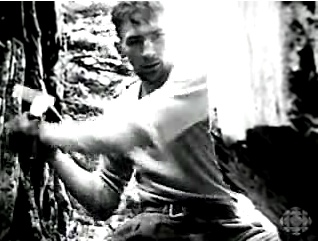 Felling a tree, surely, not a pole at SGang Gwaay. Source: CBC.