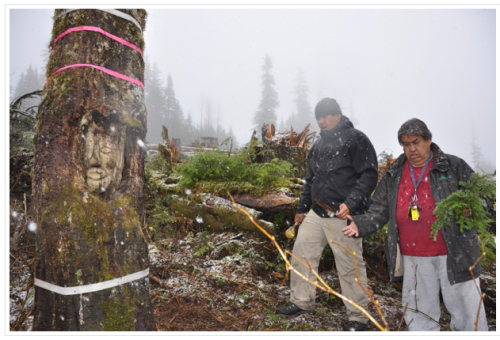 There has been a mini-flurry of new arborglyphs found in BC – well two of them –  but they are extraordinarily rare.  First up for this blog is the example above, which comes from Klahoose First Nation territory, roughly around Toba Inlet in the extreme NE corner of the Salish Sea (map).  This human face was carved into a tree some time in the 19th century.  It’s in rather stunning condition, setting aside the cut block it finds itself in.  Risk of blowdown is probably why, after appropriate ceremony, it has been moved to the Klahoose offices at T’oq (Squirrel Cove).  As the page describes:

The Klahoose Cultural Leader Norman Harry Sr. and a Tla’amin Cultural Leader Erik Blaney witnessed and performed a ceremony to ensure cultural protocol was observed. The heartfelt moments before the tree was harvested was both moving and surreal on that snowy winter Friday. Needless to say that the emotional event was a historical moment for those who witnessed.

END_OF_DOCUMENT_TOKEN_TO_BE_REPLACED 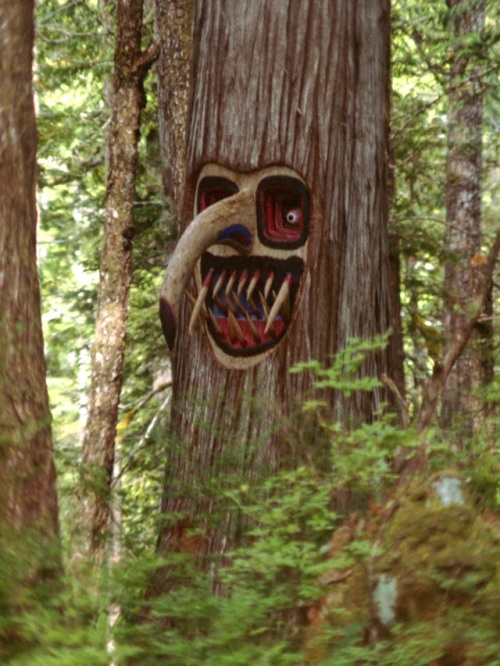 I’ve mentioned Dan Leen’s excellent web page before.  When I was on Teredo N. with him I heard many excellent stories including how he came across a spectacular carved tree on Calvert Island, near Namu.  Finally I get to see what he meant.  This strikes me as the work of a trippy bush hippy (and maybe Dan himself, heh) more than a NW Coast thing, but it is fun nonetheless.

Incidentally, “Arborglyph” is a Frankenstein word melding Greek and Latin roots and should probably be replaced with “dendroglyph”, which is also easier to say.