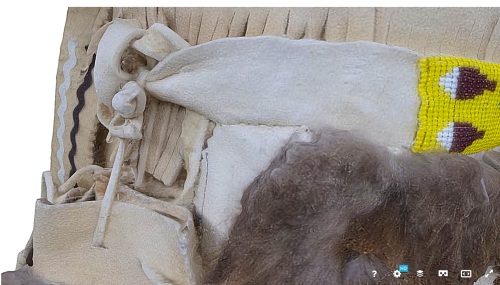 Detail of “Chief’s Regalia” 3-D model, Secwepemc Museum. Note how you can see the many layers of leather, fur and stitchng. Model by arck-project.  https://sketchfab.com/models/bcacd91251954b2281e41b554d4db88d

While I was sleeping, 3-D digital models of archaeological items and features have come a long way in their usability and quality.  I stumbled into a set of three cool models from the Secwepemc Museum & Heritage Park (in Tk’emlúps / Kamloops), who have collaborated with a company called The ARC/K-Project which uses SketchFab to make rotatable, high-resolution, and (most importantly based on my experience) slick, smooth, and stable virtual models of a few of the items in their collection, such as the Chief’s Regalia detail shown above (link to model). I was mildly disappointed that there were only a couple of 3-D models online, but then I found more.  More is good, nom nom nom. 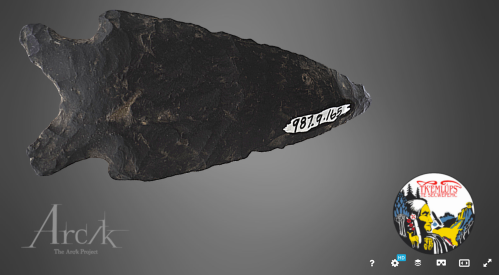 I don’t see any links to these models at the Secwepemc Museum, and the main page at the  Arck Project only shows a few.  However, there are about a dozen of them if you click here, which goes to their SketchFab channel. In the screenshots I post here, you can click on the URL in the caption to go to the 3D model. 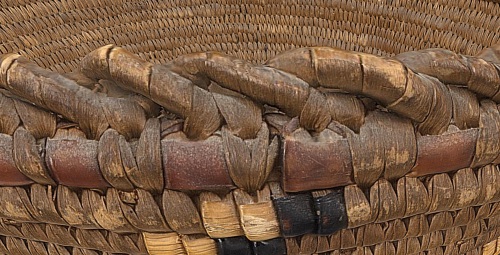 The detail on these models is excellent — edge selvedge of a coiled basket. Source: Inside of a digging stick – the worm’s eye view. Source: https://sketchfab.com/models/ad788b1ed93b4f4297aab4384849e937

Some of the tricks are pretty slick – for example, if you zoom down onto the lid of this coiled basket, you end up on the inside for a look-around. For this mortar and pestle, you can see how the pestle fits, but if you go deeper, then the pestle disappears and you can check out the use wear at the bottom.

For the projectile points, such as this Nesikep Point, you can rotate them edge-on and really get a feel for the thickness and quality of their edges, something pretty hard to do with regular photographs. 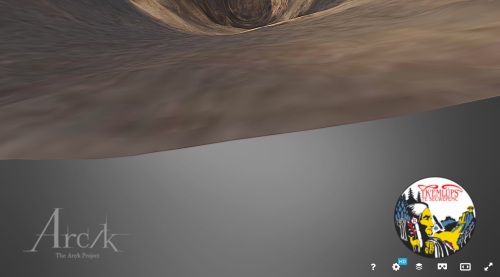 On the other hand, there are some typical buts of machine logic on display.  If you zoom into the tip of a digging stick, you end up inside the stick, rendered as a weird tunnel with the negative surface of the wood – inside out, in effect, challenging your perspective but not in a useful way unless you aspire to be a grub. The same problem is evident in some of the more ambitious models, like a railroad engine and a mine near Kamloops. 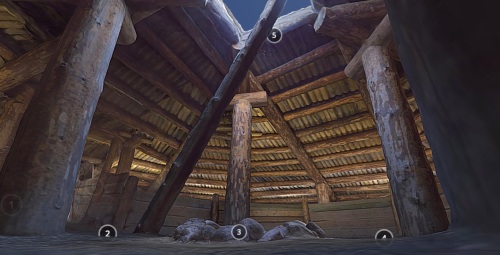 One of the best models is of a Pit House. This one includes hyperlinks with snippets of information, and you can navigate around inside and out — fly out the roof, lie in bed, whatever you feel like (by the way, “lie in bed” is the correct answer).

Superficially, these seem like a straightforward “good thing”, and at a certain level they are. Friend of the Blog Loren Davis at Oregon State is doing a lot of work with both laser scanning and photogrammetry to make comparative databases of 3D scanned artifacts, enabling tricks like subtracting an artifact from the average of its type.

At another level though, one needs to examine the principles behind these kinds of projects.  As the Arck Project states, they “digitally archive that which is too valuable, too important, and too unique to be lost or forgotten. As great as the palaces of Versailles or as humble as a discarded arrowhead.” In the wake of the terrible museum fire in Brazil there has been a lot of chatter about digital archives – and yes these are better than nothing. But then, if we go down the road too far of digital archives, then nothing is exactly what we will have. It becomes the equivalent of the Immortality Drive project, which loaded your DNA onto a floppy disk and put it on the International Space Station as a way of archiving “you” for the future (Yes, this happened).  I bet you prefer the real you, eh? 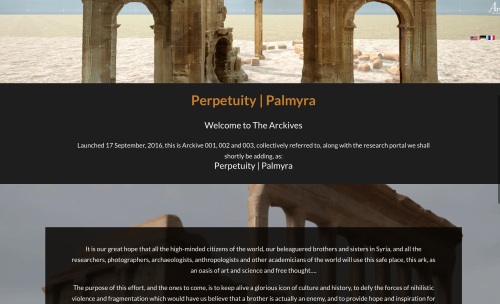 So when we see projects like the digital Palmyra “Arckive” – well let’s not pretend that Palmyra wasn’t massively impacted by ISIS and others and will never be the same. I’ve been to Palmyra, and these digital models just are not a substitute, like a picture of a hamburger is not a meal. (Seriously though, a picture of three hamburgers might be a meal). Professionals know this of course, but the nuance may be lost in the popular imagination. On the other hand, people seem to enjoy visiting massively reconstructed monuments like Knossos or Stonehenge so maybe we just all move on.

Ideally we would have both digital and physical records, but digitizing projects may come at the expense of physical curation (there was a lot of money poured into digital museum space in Brazil, while the physical collection was left without fire suppression). 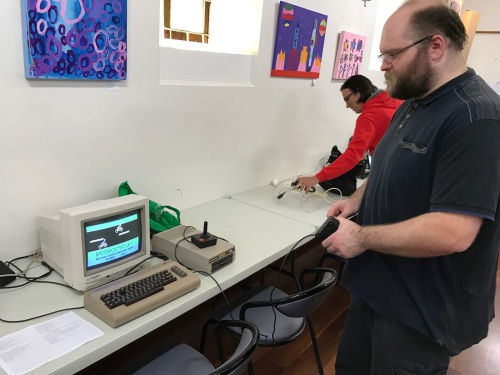 Your Bloggergänger, Bloggergänging. And you wonder why the posts are infrequent. Send money.

Further, as my friends in the digital archaeology world stress, digital collections also need active and continuing curation or you are left with the equivalent of trying to jam a 5.25″ floppy into your MacBook Air.  And while “digital repatriation” is laudable, it doesn’t actually solve the problem of First Nations’ possessions being distant from home and stored in sterile settings. Better than nothing? Yes. Better than actual repatriation? Not really.

But enough of the DownerSpeak – I should save that for my day job. In the meantime it is ok to enjoy these models, guilt free. You might also browse around and see more collections, such as a few objects from the Pacific Grove Museum and a large collection of miscellania which includes some Chinese archaeology and midwestern basketry, or a bunch of Neolithic Artifacts or this general search or this one (may return models of human remains). You can see these in virtual reality using e.g., Google Cardboard, or see the layers of the models as well using the buttons in the lower right of each one.

BTW these models work ok for me on an iPhone 6, and very well on a MacBook.  I can’t guarantee they will work on your old Nokia though.