Old Enoch ca. 1910; was the builder of all fish traps; in the background is one he has just completed, made from young Jack pine and lashed together with wild rose roots.  Source: BC Archives: https://goo.gl/uGtVo4

Not every blog post has to be an essay, sometimes we can just admire the slightly smug look on a smiling guy who is good at making fishtraps, and knows it. And obviously I’m kidding about the essay part. 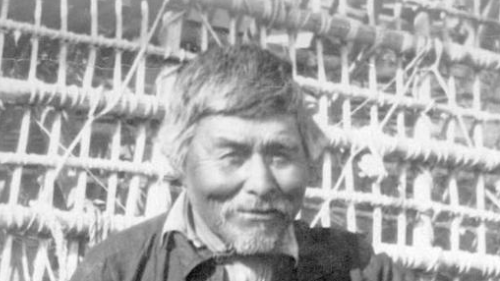 Close up of Enoch and his new weir, “made from young Jack pine and lashed together with wild rose roots.” Source: BC Archives.

There’s clearly some great detail on weir construction if you had a higher-resolution version, but it’s even nice to see the note made with young Jack pine (must be lodgepole pine) and the cordage is made of wild rose roots. You can see a variety of cordage in fact, from twisted three strand to the left and apparently single split roots in other locations. I suspect that this is not a “trap” per se but a part of a fence panel from a weir.  It doesn’t seem to be particularly three dimensional, and it would be a huge, rectangular trap if that’s what it were. 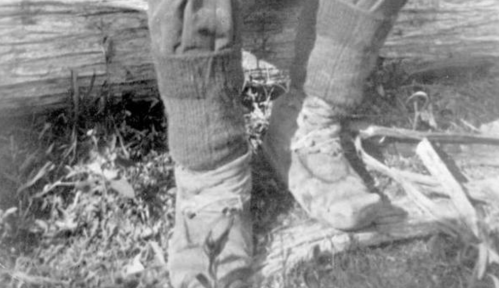 So who was Old Enoch, and where?  The BC Archives gives no information other than the date of ca. 1910.  I’m sure someone knows, in the meantime, this late 1920s picture of “Mrs. Donald Gray, wife of Chief Gray at Hagwilget”, has the note that “Donald Gray married Theresa Enoch, 18 October 1928, in Hagwilget.” And googling around and looking in, for example, Susan Marsden’s work and the journal of the missionary Crosby and so forth suggests several Skeena-area aboriginal men going by the name Enoch in the late 19th century.  If I’m right, the timing and locale is consistent with some of the weir pictures I showed a few days ago. Anyway, look at his shoes!  It’s interesting Old Enoch seems to have adopted western clothes except he’s wearing leather mocassins (feet carefully on a slab of bark to keep dry),  and you can see those strips of cedar bark in the lower right, perhaps from making some of the cordage in the picture. In fact it is interesting that Enoch was not using manufactured cordage by 1910 — probably the traditional material was better, certainly cheaper, however there must have been a lot of decent fishing twine available by this time.  And finally, the caption suggests he was the maker of “all the fish traps”, presumably of his people. Obviously he was good at it, but perhaps also it was a specialized craft in the community.

Anyway, if anyone knows more on Enoch’s identity or his people, or on weirs generally, then please leave a comment.

Model of a fish trap made by a Tsimshian Elder. Or is it a toy? There must be a backstory. Archives dates this at 1951 but that may be accession. Source BC Archives https://goo.gl/xr1r7a