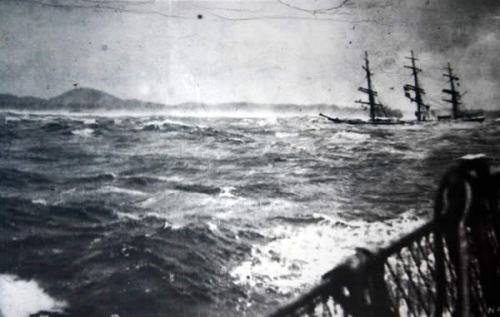 The three-masted ship Carelmapu with decks awash, dragging her anchors into Schooner Cove, near Tofino, in 1915

The ‘Virtual Museum of Canada”  has been responsible for some nice online exhibits, although a lot of these are now fairly dated.  One with what we could call a “retro web design”, but some good content, is the Shipwrecks of Vancouver Island site, apparently put together mainly on the watch of the Maritime Museum of BC with help from the Underwater Archaeological Society of BC.  There are some nice videos of underwater archaeology, and other informative materials.

Site navigation, though, is much easier if you just go to the site map here — the absurdly finicky navigation does weird things like, say, means using the back button always takes you to a splash introduction screen — is a crime against the web.  Especially since museum people are involved: why such disdain for solid future-proof web design values?  This page, for example, has a nifty slider to scroll through an interactive map: but if you don’t pay attention (e.g., if you use your back button) you will always end up on a “loading XML – introduction to the database” overlay screen page which gets tired after about the third time.  The VMC should consider a legacy fund to make sure that the sites which they poured money into for a while can all be kept up to date for both content and also compliance or at least ease of use.  It would not surprise me in the slightest if the VMC had spent over $100,000 on this site — the one site of their I know something about they spent $140,000 and it is no flashier than this thing.  Almost all that money went into design and mounting of content, very little went to the content creators themselves.  If that  applied here, I think we have a right to expect more – is this site design worth $100,000?  It seems to me that, even in 2004, a competent web designer working alone, with content given by others, could have put this together in about a month. 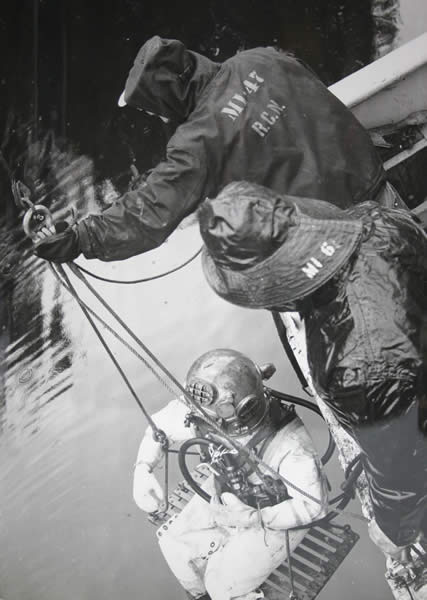 Canadian Navy diver goes overboard in 1959 to examine the 1853 wreck of the Lord Western, near Flores Island.

3 responses to “Shipwrecks of Vancouver Island”