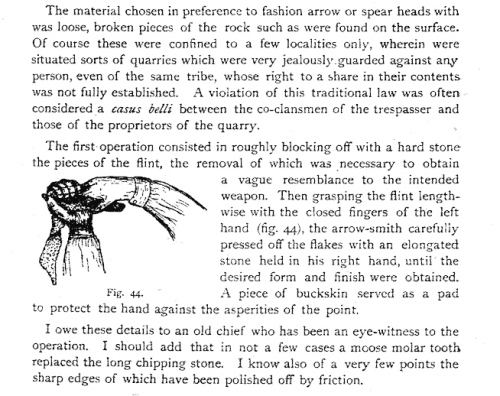 Father Adrien-Gabriel Morice was a Catholic missionary working in the Skeena and Bulkley River areas of western British Columbia during the later 19th century.  He is perhaps best known for his documentation and writing system for the “Carrier” (Yinka Dene) language, but he also published a major work entitled Notes Archaeological, Industrial and Technological of the Western Denes, with an Ethnographical Sketch of the Same (1893).  The work is a cornucopia of careful observation mixed with some interesting, and occasionally rather religiously judgmental and speculative, commentaries.  One of the most interesting short passages is excerpted above: Morice records how to make stone tools via flaking.  Because metal tools became widely available in the early historical period and had some superior qualities, such accounts of traditional flaked stone (the bread and butter of archaeological sites) are very rare.  The figure above appears accurate in its description of the slightly awkward-seeming way of holding the stone: I have seen this palm grip used by many contemporary flintknappers.  Elsewhere, Morice records a series of Yinka Dene names for different stones, including chalcedony and obsidian.  You can page through his book, but not download it in entirety, here at Canadiana.org. The illustration above is from Page 65 on the drop down menu.  (Why they don’t just make a link to the whole PDF is beyond me).  There are other informative sections, such as about 10 pages describing the operation of fish-traps and weirs. 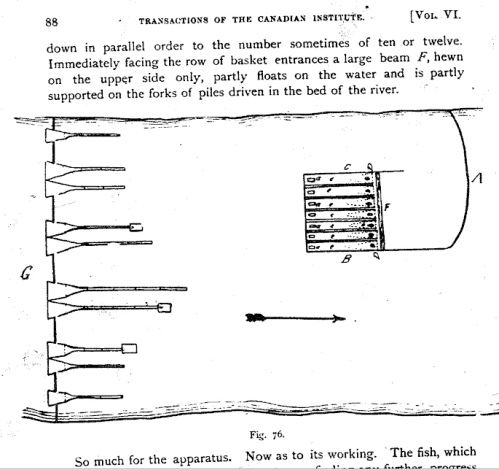