Herring Spawn and Beyond

Herring are taking Northwest Coast archaeology by storm.  A series of key insights and publications has pulled these little fish into the heart of our reconstructions of subsistence – across the entire coast, and into its deepest history.  It’s an interesting development which highlights once again how prone archaeologists can be to a myopic faith in our received models: salmon and cedar speak the loudest and it turns out we needed an aid in hearing herring.

Herring were valued in two very different ways: as delicious food in their own right, and for their eggs, which they would spawn in prodigious numbers in the nearshore, often on kelp or on conifer branches, which could even be placed in the water by people for this purpose. The spawn fishery would leave little or no durable archaeological evidence, and perhaps has been correspondingly underestimated by local researchers. Eating the fish themselves has left a widespread, robust record, yet one which has also been underestimated.  All this by way of introducing the picture above, which I haven’t seen reproduced elsewhere, showing gobs of dried herring spawn near Sitka, Alaska. It’s from the excellent online photo archives of the Sealaska Heritage Institute. Each of those clumps is like a rich, nutrient-dense, yet storable, delicious marine omelet.

The emerging archaeology of herring is too big a topic for a mere blog to cover, but click onwards for a couple more comments and links. 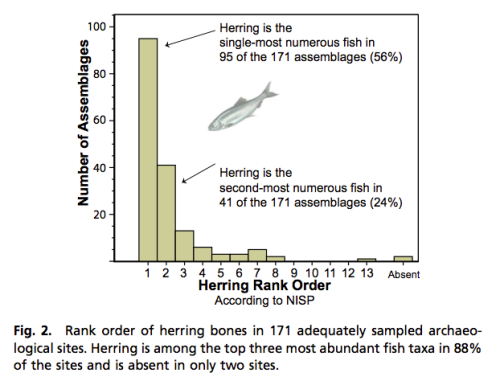 As George Orwell said, “To see what is in front of one’s nose needs a constant struggle.”  The recent paper by McKechnie et al (2014) really shows clearly how front and centre herring are, or should be, in the Northwest archaeological record.  Not only are they ubiquitous (found in some numbers at almost every archaeological site), but they rank highly by the most simple counting method: number of identified bones.  As the graph above shows, they’re in the top three fish at 88% of a very large sample of 171 sites, and the top two at 80%. The paper is now open access so you can download it to see the other excellent figures which (spoiler alert) show herring in every nook and cranny, usually in disgustingly large amounts.  Now, no doubt at certain times and places other species hold sway, but we can’t ignore the important role of herring, no matter where on the NW Coast we work, and especially in the Salish Sea. I should give a shout-out as well to Greg Monks, who was ahead of the curve in this regard with his provocative 1987 “prey as bait” hypothesis, in which herring, mass harvested in traps, played a central role in combating what he saw as “salmonopeia”, a perceptual disease thought to be chronic among local archaeologists. 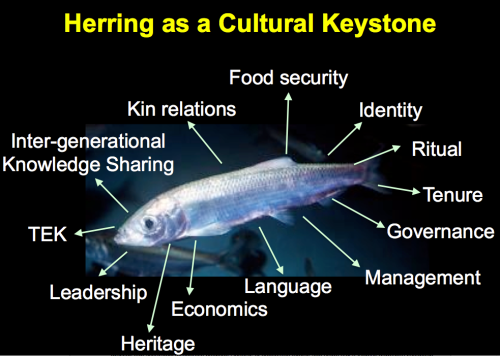 Another interesting aspect of the herring story is rooted in historical ecology. Herring have been heavily impacted by historic fishing practices, many of the rapacious mine-the-sea mentality.  Even the massive runs of historic times may pale to those of the more distant past.  As a keystone forage-fish, herring may underpin the resilience of the North Pacific foodweb and consequently, we may be severely underestimating the potential productivity of the entire ecosystem if we accept herring-depleted recent conditions as a baseline.  Luckily, there is an active program to really pin down the productivity and importance of herring from biological, cultural and archaeological perspectives.  As with so many of the cutting-edge marine science programs here on the coast, the “Herring School” is underwritten by the Tula Foundation / Hakai Institute.  They have an absolutely gorgeous web site, most notably several dozen short videos which explain the importance of herring to coastal people and scientists. Kudos to  Dana Lepofsky, Anne Saloman, Iain McKechnie, Margot Hessing-Lewis, Madonna Moss, Alisha Gauvreau, Mark Wunsch and the school of others (I knew I shouldn’t have started naming names!) involved in bringing herring to the forefront of archaeology and conservation biology.  I should also add the backbone of the McKechnie et al. research is the careful faunal work done by numerous individuals over the years, but most prominently perhaps by Susan Crockford, Becky Wigen and Gay Frederick at Pacific Identifications. Anyway, it’s exciting to see archaeology at the forefront of such an important issue in the economic and social life of the present day. 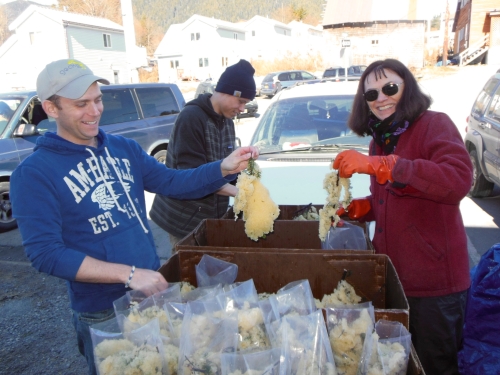 Speaking of Madonna Moss, you can get a really excellent introduction to herring in Northwest Coast archaeology by listening to her hour-long illustrated lecture to the SHI from earlier this year.  It includes not only a lot of knowledge but  key references are given and it’s an excellent primer on the subject.  There’s also a great introductory article by the indispensable Jude Isabella.

So herring: why so hard to hear?  I suspect “salmonopeia” still has something to do with it. For example, if we stereotype all fish traps as being directed towards salmon, we miss the labour investment that went into harvesting herring and downgrade it accordingly. If we interpret bones points as fish hook barbs and not herring rake tines, we underestimate herring. Of course, herring are small fish with small bones, and you need to be fairly dedicated to fine-mesh water-screening to feel confident you’re getting the herring, or enough of them – or you must be quite thorough in your column sampling. It’s even more impressive that they are so common and ubiquitous in the face of a perhaps patchy record of half-hearted recovery efforts. I posted before about eulachon, an “archaeologically invisible” food because of the extreme processing methods needed to render out their oil. Herring are not as intrinsically silent as that — while the roe which triggered this blog post is archaeologically invisible, the bones, though small, are durable–  but they have been seriously under-estimated.  Not, perhaps, because we’ve been incapable of hearing their signal but because we’ve been unready or unwilling or ill-disposed towards doing so.  Probably the same holds for eulachon, which spawn in prodigious, concentrated schools of millions. For me, reconfiguring my own template of NW Coast subsistence is going to take some effort, and perhaps a slap in the head with a cold kipper before I truly get it – but it’s coming and very surely, we’re all going to get schooled by herring.

Herring vertebrae: everywhere but hard to recover. Source: U of Oregon, click for article.

10 responses to “Herring Spawn and Beyond”