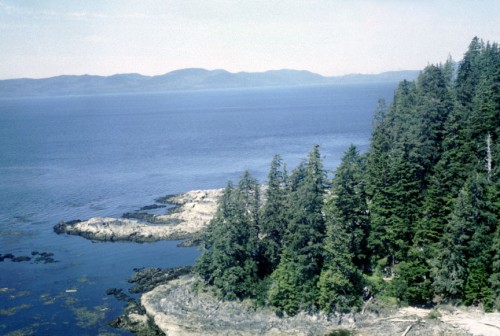 E. James (Jim) Dixon, now at the University of New Mexico,  is pretty well known on the Northwest Coast for his pioneering work at the 10 to 12,000 year old 49-PET-408 (“On Your Knees Cave”) in the Alaskan Panhandle, and more recently for his exciting work on Alaskan Ice Patches. I see now that he apparently received some funding to go underwater during the summer of 2010 in the waters around PET-408, not far north from the aptly named Dixon Entrance, in Southeast Alaska (map).  This work could have implications for the coastal route of First Peopling of the Americas.

So far I haven’t heard any details of results, but I certainly look forward to finding out about both his methods, the challenges he may have faced, and any results.  From the summary of his grant award, which closely parallels the work of Daryl Fedje and his team around Haida Gwaii:

This research project investigates alternative theories regarding the origins of Native Americans, the nature of their original adaptation, and when and how they first colonized the Americas. During the Last Glacial Maximum (LGM), continental glaciers lowered global sea level, exposing the Bering Land Bridge. Glaciers also blocked the entry of humans migrating from Asia to the Americas. However, archeological discoveries indicate that humans had colonized areas south of the ice sheets prior to the end of the last Ice Age (c 11,000 years radiocarbon ago). Based on these data, the PI questions the predominant theory that the Bering Land Bridge and southward migration through central North America was the original route of human entry to the Americas. Alternatively, the coastal migration hypothesis suggests that between 16,000 and 12,000 years ago humans using watercraft may have first entered the Americas by colonizing refugia and deglaciated areas of the continental shelf of the Northwest (NW) Coast of North America exposed by lower sea levels. Native American oral histories, recent discovery of artifacts on the ocean floor, and refined paleoenvironmental and geological data, make it possible to identify specific locales where ancient submerged sites may be located in SE Alaska. This research will analyze these data and employ Geographic Information Systems (GIS) modeling of LGM and post-LGM paleogeography to identify specific under water locales on the continental shelf of Southeast (SE) Alaska that exhibit high archeological potential. Identified site locales and select areas exhibiting high archeological potential will be surveyed and sampled using marine archeological techniques including side scan sonar, a remotely operated vehicle including video cameras, and bottom sediment sampling in an effort to test the coastal migration hypothesis.

Logistics Summary:
With this project, the research team will explore the PI’s hypothesis that the Americans may have been settled by coastal migration along the continental shelf of Southeastern Alaska. In June 2010, a team of five will assemble at the research area: the continental shelf of the Alexander Archipelago, located in SE Alaska’s Tongass National Forest. With assistance from the Sealaska Heritage Institute, the PI will review indigenous oral histories and interview knowledgeable Native and non-Native residents willing to share their knowledge relating to the possible discovery of artifacts from the underwater locales in the Alexander Archipelago. This information will be utilized in identifying potential survey areas. The research area encompasses several locales where artifacts from the ocean floor have been reported: one site is approximately six miles north of On Your Knees Cave, the oldest terrestrial archeological site known from SE Alaska; another is located offshore Suemez Island, a known source of obsidian; a third is potentially offshore of Kosciusko Island. The survey will be conducted using a boat outfitted with an ROV with underwater video capability, side scan sonar, grab sampler, and other equipment. The research team will analyze imagery and samples for evidence of ancient human occupation, possibly returning some samples to the home institute for further analysis.

It’s good to see integration of Oral Histories – in Haida Gwaii it seems likely these reach into the terminal Pleistocene.  Talking to local, knowledgeable people could also perhaps identify fisherman who have trawled up artifacts or other unusual items from the sea floor – this has been a productive approach in northern Europe. In fact, Dixon notes artifacts have already been reported from the Alaskan sea floor, which is intriguing.  I’m looking forward to hearing more about all of this!