The above is a rendering of Ucluelet Inlet on the west coast of Vancouver Island, made in 1859.  You can clearly see the aboriginal village to the right. Artfully, the artist has caught a whale hunt at the exact moment of harpooning in the foreground.   I’ve zoomed in on the village below.

Interestingly, the next picture in this folio from Yale University is labelled as a “Songhee” Village (below), yet rather than a Victoria area settlement, it fairly clearly shows what I think is another Ucluelet-area village, with the distinctive saddle-shaped hill to the east side of the inlet.  (The trees are different which makes me think it is a different one than above) Anyway, nothing earth-shaking but I had never seen these historic drawings before. 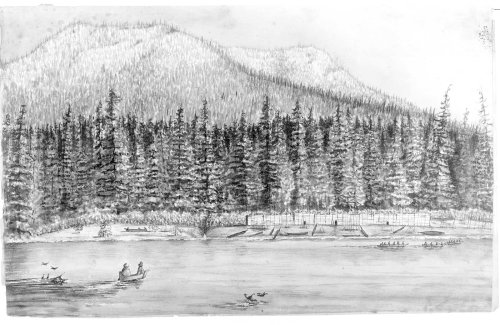