Reburial at Hagwilget: A Video 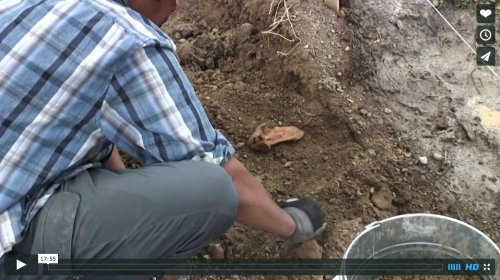 Archaeological encounters with human remains bring into sharp relief the competing values surrounding cultural heritage.  It doesn’t always go well – powerful emotions are uncovered alongside the burials.  So it’s refreshing and informative to come across a short video, Sacred Ground: In honour and in memory of our ancestors, made by Crossroads Cultural Resource Management, which follows the aftermath of the accidental disturbance of human remains at Hagwilget, on the Bulkley River.

END_OF_DOCUMENT_TOKEN_TO_BE_REPLACED

While I was away over the summer the local free paper, the Victoria News, did a (to my mind)   high quality series on reburial and respect in Songhees and Esquimalt communities (cache). The three articles by Lisa Weighton include comments from numerous aboriginal spiritual and political leaders, and sensitively describes how Straits Salish faith asserts that the dead are always with the living.  The dead do not conveniently depart to some other place, but continue in a world alongside and intersecting the world of the living.

Hence ancestral remains are not something belonging to a past which can be “gotten over” but are very much part of the present world.  Laying a person to rest, or back to rest after disturbance, requires food, clothing and prayer.  I don’t pretend to understand the concept well, but I have been to some such ceremonies and the power of the moment is impossible to deny.  In my limited experience the article fairly represents the spiritual and emotional needs that must be met under the sad circumstance of disturbing the dead.  It is incumbent on archaeologists and all citizens to not only work to minimize disturbance of the dead but to respect traditional practices.  It has been impressed on me that such practices are meant to protect us, the living, First Nations or not, as well as to give comfort and respect to the dead.  This should now be considered absolutely part of mainstream archaeology.

END_OF_DOCUMENT_TOKEN_TO_BE_REPLACED

Last summer there was a sad incident with human remains being disturbed in the Dallas Road area of Victoria. The remains, of a young SLENI (woman) were subsequently reburied and since then a burning ceremony has been held.  I’ve been privileged to attend burning and reburial ceremonies and they are powerful and sincere events.  Interesting then to see this news snippet today , focusing on the cost ($9,400) — I can hardly wait for the informed and balanced commentary to ensue.  But kudos to Dean Fortin for doing the right thing – it is no more (or less) than most developers have done over the last decade when human remains were disturbed.  I have to say, though, it is disingenous for Mayor Fortin to note the Songhees reserve is not in the City of Victoria — memo to the Mayor: Victoria is within Songhees territory; the remains are from Songhees territory, the current reserve boundaries are completely irrelevant to this issue.

The cost of being freindly [sic]

“We feel like we have an obligation to work with all other levels of government including our First Nations,” said Fortin.

The cost was a drop in the bucket in the overall $2.4 million-project said Derk Wevers, the city’s sewer and storm water quality technician.

The city also financed a traditional burning ceremony and feast on the Songhees First Nation reserve late last month, which included wages for a city contractor, gifts, food and the gravestone.

Fortin said he was eager to take part despite the reserve not being within Victoria’s boundaries.