Only occasionally does this space turn its eye to fossils, but there’s been quite a bit of press this last week about the perceived lack of protection of fossil sites in British Columbia, some of which are alleged to be ground up for “kitty litter” (archive, etc).  In that CBC report the Minister of Agriculture and Lands lists a whole variety of ways that fossil sites are, indeed, protected, in response to the general position of the paleontologists that there was no such legal protection. I believe this page summarizes the government’s position (which does indeed explicitly allow commercial exploitation in principle, though they are not currently taking kitty litter applications.  The page is a virtual museum of weasel words and contradictory information and frankly, makes almost no coherent sense).

Anyhow,  the most direct and obvious way that such sites are, in my opinion, already protected, or the way they could be: by the Heritage Conservation Act (HCA).

END_OF_DOCUMENT_TOKEN_TO_BE_REPLACED

Waatch River: a raised beach site on the Olympic Peninsula 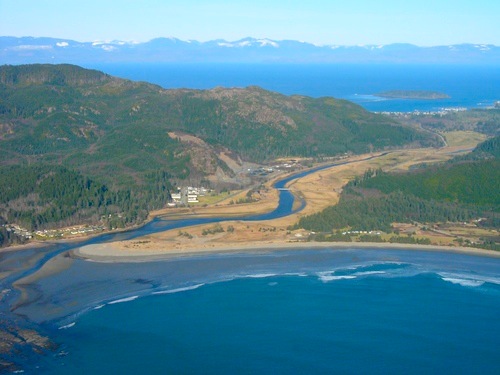 The Waatch River flows in a low valley that connects Neah Bay across the Olympic Peninsula to Makah Bay.  When sea levels were higher, it would flood with sea water and turn Cape Flattery into an island.  Interesting, then, to see that an old raised beach site has been found on the Waatch River at an elevation of about 13 metres above, and 2 km away from, the modern shoreline.

END_OF_DOCUMENT_TOKEN_TO_BE_REPLACED

Christopher Locke is an artist whose work includes a number of fun “modern fossils“, like his palaeofuturistic rendering of an iPod (Egosiliqua malusymphonicus), above, or a Nintendo game controller (Dominaludus sexagentaquad) below.  I take the work to be a slightly sarcastic commentary on the work of palaeontologists and archaeologists as well as on the flukey preservation of ephemera – see his specimen notes alongside each piece at his website.