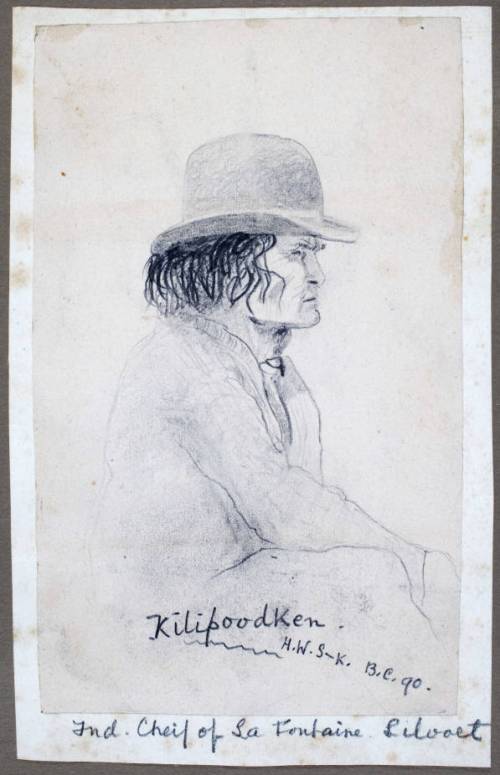 I’ve just come across a remarkable sketchbook in the Alaskan digital archives.  It covers the wide-ranging travels of one Heywood W. Seton-Karr, a British Army officer, big game hunter, amateur archaeologist, and talented artist (about whom, more below).  While I could probably fill 10 blog posts from this sketchbook, (and may do so!) a very interesting find is the portrait sketch above.  The caption reads,

This certainly refers to the Xaxli’p First Nation, also known as the Fountain First Nation, one of the Lillooet (not Libooet!) Tribal Council from the central Fraser River region of British Columbia.  Since googling for “Kilipoodken” only returns the Alaska Digital archives source, it seems to me possible that this mislabelled portrait is unknown to the Xaxli’p Nation, where it is more than likely some of this Chief’s descendants still live.   I hope they find this portrait.

Otherwise, there is much of interest in these sketchbooks.Seton-Karr ( who is not the Seton of Seton Lake) was a keen observer of landscape and had a particular interest in aboriginal people.  His sketchbook starts in Finland and then jumps to Alaska, with seemingly random pictures from along the CPR in 1890 and several sketches of Nanaimo Harbour interspersed.  I suspect the Alaskan digital version is a composite of several books or trips.  I will post some of his pictures of masks and “Indian Doctors” and other interesting topics in due course.

"While I bath in the sea, the dog jumps in and kills a Dog-salmon, which he drags to shore". Source: Alaskan Digital Archives.

Not content with drawing the whole fish, he later composes a touching portrait of another Dog-salmon dentary: 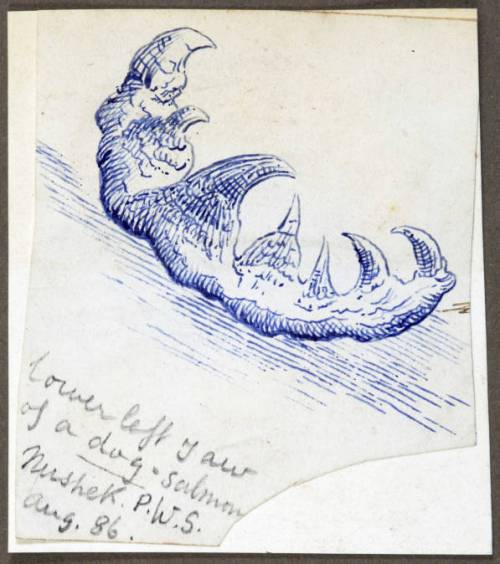 As I said, more in due course but here is some information about Seton-Karr, drawn from the Oxford Dictionary of National Biography:

Karr, Heywood Walter Seton- (1859–1938), soldier and game hunter, was born on 2 June 1859 at Belgaum, Bombay, India, the third son of three sons and a daughter of George Berkeley Seton-Karr and his wife, Eleanor, daughter of H. Osborne of Suffolk. His brothers were Sir Henry Seton-Karr MP and Walter Seton-Karr, lawyer. George Seton-Karr, member of an old Scottish family formerly of Kippislaw, a civil servant in the Bombay presidency, had been resident commissioner of Baroda during the Sepoy mutiny of 1857–8. Seton-Karr was educated at Eton College from 1873 to 1877, matriculated at Oriel College, Oxford, in 1878, then underwent military training at Sandhurst before being gazetted lieutenant in 1882 in the Berkshire regiment, which was then stationed at Gibraltar. By July that year the regiment was in Alexandria. It took no part in the battle of Tell al-Kebir and by 1883 Seton-Karr was back in Gibraltar ‘having earned a rather easy medal’ (Myatt, 69). He transferred to the Gordon Highlanders but left the army by the end of 1884.

While still in Egypt, Seton-Karr discovered in the eastern desert the ancient flint mines whose location had been lost. The flint strata had been excavated into the cliff face, and he collected implements of several periods, which he later gave to Liverpool Museum. In December 1897 he examined ancient emerald mines south-east of Edfu on behalf of Streeter & Co. Ltd, to whom the government had leased the mines. He found the Roman shafts largely filled with washed-in rubble and discovered a few fragments of emerald around the ore heaps.

In 1896 Seton-Karr, in search of game in Somaliland, came across numerous small worked flints, which he recognized as resembling palaeolithic tools previously found in France. He showed examples to John Evans and studied Evans’s collections of flints from various parts of the world, and on revisiting Somaliland he found many large hand-axes resembling those from the Somme gravels. These tools, and others from the ‘lost flint mines’, were exhibited to the Royal Archaeological Society at their meeting in London on 2 June 1897. Seton-Karr’s discoveries in Somaliland were the first evidence of Stone Age man in tropical Africa, and, in Evans’s view, tended to prove the unity of races in Asia, Europe, and Africa in palaeolithic times. For his contributions to archaeology, Seton-Karr was awarded the Galileo gold medal by the University of Florence.

Rifle shooting had been Seton-Karr’s passion since his Eton schooldays, and he went to Norway on his first hunting expedition before his first army posting. Thereafter he went in pursuit of big game almost every year: he made nineteen expeditions to tropical Africa, more than twenty to India, and the same to Arctic Europe, sometimes with a few European or American companions, at other times only with local guides and servants. These exploits were written up in magazines and as a series of books. Shores and Alps of Alaska (1886) described his journey as one of the first passengers to cross Canada by the new Canadian Pacific Railway, then a steamship journey north, and an abortive attempt to scale the 18,000 ft Mount St Elias in Alaska, where the party was forced to turn back at 7200 ft. Ten Years’ Wild Sports in Foreign Lands, or, Travels in the 1880s (1889) described adventures ranging from Canada and Scandinavia, including its northern areas, to Sardinia (which he visited with the earl of Mayo in 1884 and 1885), Corsica, and Mount Athos, and to Persia and India. He had three companions for the expedition by canoe and sled that was described in Bear Hunting in the White Mountains, or, Alaska and British Columbia Revisited (1890). Seton-Karr had considerable artistic ability: his own sketches illustrate these books, and a number of his watercolours were presented to the Imperial War Museum.

When in London, Seton-Karr was a familiar figure at meetings of the Royal Geographical Society. From an early age he saw himself as possessing the power of passing messages from the dead to those remaining, and from his considerable estate he bequeathed modest sums to the International Institute of Psychical Research, the Eugenics Society, and the Birth Control Clinic, leaving the remainder to be shared by his sister, Eleanor, and his nephews and nieces. Latterly he lived at 8 St Paul’s Mansions, Hammersmith, London; he died, unmarried, at St Mary’s Hospital, Paddington, on 12 January 1938, and was buried on 17 January at Fulham cemetery, Mortlake, Surrey.