Andrew Barton did an excellent job reviewing the biology of the Scaphopoda, the archaeological record of dentalia use and trade, and the technology available to harvest these small creatures with tusk-shaped shells.  Overall, he brought a lot of nuance to a topic that had been somewhat over-simplified.  For example, there is no real evidence that these shells were only available at depth from the NW corner of Vancouver Island.  Barton reports on attempts to replicate ethnographic dentalia “spears” (more like a rake, or a pasta fork).  You should be able to download a copy of Fishing for Ivory Worms : a review of ethnographic and historically recorded Dentalium source locations from SFU dSpace.

Fieldwork Picture of the Day 9

Danny at the helm, aaaargh Billy.

Underwater research at Section Cove, near Gaadu Din. I posted a picture earlier of a diver on the bottom.  Here is a view from topside — Danny, boat skipper, wise-ass and all round rock solid good guy — has a GPS-linked laptop in front of him which is displaying the bathymetry of Section Cove.  (see the image on Danny’s screen here, courtesy of Daryl).  This enables him to tow the sonar fish exactly where required, or, on this occasion, help position a small dredging bucket for bottom sampling purposes.  With differential GPS, you can position the ship to within less than a metre of where you want it, relative to the bottom.  This means measuring the distance between the GPS antenna and the crane and building in an offset, which is trickier than it sounds. The bathymetry is also sub-metre in resolution.  Thus, we can target the bucket exactly where we want it — of course strong currents and bucket flutter can still move it around some.  It has been slow progress on this work but all the pieces are in place for what could be an exciting breakthrough –  a base camp on a small lake, now drowned, dating to sometime older than 11,500 solar years ago would be most welcome considering most of our other sites of this age are rather one-dimensional.

The purpose of the camp could be base camp for bear hunting in the nearby Gaadu Din caves, or more likely sockeye fishing in the lake-stream system that used to flow along the terrain here, under Danny’s  keel. 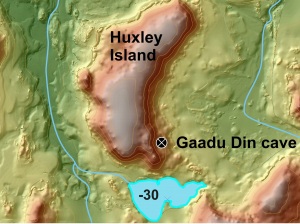 The lake, the salmon, the cave, the creek. Green tones are now underwater. Image prepared by Daryl.

Fieldwork Picture of the Day 6 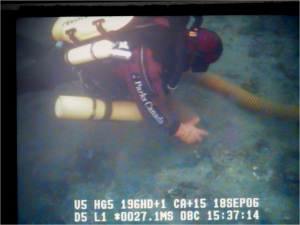 Parks Canada has a great underwater archaeology unit.  They have been coming out to dive on targets we’ve identified on the drowned terrestrial landscape of Haida Gwaii.  This picture shows an archaeologist with a suction hose on the bottom near (though, sadly, not on) the target we identified at the outlet of the lake that formerly sat in Section Cove, near Huxley Island. This target is at about 33 metres below the surface, while the diver here is at about 27 metres down, so on a small bump above ancient landform of interest – not a place with zero potential, but not a huge amount either, we don’t think. The hose sucked out the bottom sediments into a mesh bag which could then be lifted by crane onboard the mother ship, and screened on deck.  Therefore, it was not really a lift hose, but the system worked pretty well though as I say, it was not applied to the precise location of the high potential.  In future years once this dive team perfects their procedures for working in this difficult location and at challenging depths we hope to find some very cool archaeological stuff dating to the terminal Pleistocene / end of the last ice age.

Fieldwork Picture of the Day 5

A few years back I fulfilled a lifetime ambition by going down in a submersible.  This shows the Nuytten craft “Aquarius” on the surface in front of the warden’s cabin on SW Huxley Island in Gwaii Haanas (map).  We tried diving onto the ancient lake that now lies drowned at 33 metres below sea level,  more or less in front of the cabin.  This lake would have been last exposed to air about 10,000 14C years ago.  We started at about 110 metres down and then worked our way up a palaeo-river channel towards the lake, but unfortunately got off course and ended up a lot closer to the beach than we had anticipated.  These things are flown by a pilot, but the basic navigation is by transponders on the bow and stern of the mother ship which allow triangulation from a known point.  Apparently, not foolproof!  The lake we were diving onto shows huge potential for an archaeological site.  We are thinking there may have been a base camp for bear hunting at Gaadu Din 1 or 2, which are less than a kilometre away.   Possibly, too, there was a sockeye salmon fishing camp here, since the nearby caves contain numerous salmon bones from the late Pleistocene.  Anyway, it was pretty cool to go down in the submersible!