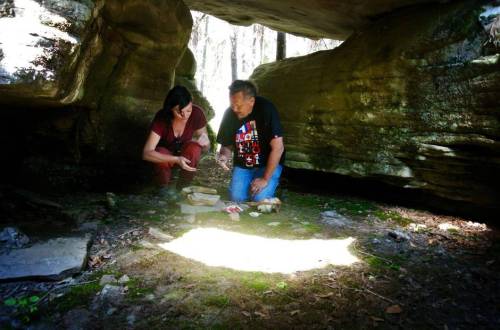 Inside of Cave near Tumbler Ridge with members of Saulteau First Nation. Source: Mark Hume, Globe and Mail.

Tumbler Ridge is a small coal-mining town on the eastern flanks of the Rockies, where British Columbia starts to resemble Alberta. It’s not a million miles, in distance nor in generalized setting, from Fort St. John (map), where Charlie Lake Cave remains one of BC’s most significant archaeological sites.  Charlie Lake Cave has radiocarbon dates of up to 10,500 years old (PDF), or possibly as old as 12,750 calendrical years or thereabouts. With interesting finds such as a basally-thinned projectile point reminiscent of a fluted point, and the deliberate burial of two ravens from the lower layers (PDF), combined with it’s location in the “ice free corridor” has made this site really significant for regional cultural history (PDF) as well as for larger issues in the peopling of the Americas debate.  (And see the new introduction/context to the Raven paper by Driver here).  The Cave was recently purchased by local First Nations, which is an interesting development with the goal of protection and developing a cultural tourism site.

Anyway, this post is not actually about Charlie Lake Cave, just to introduce the archaeological potential of caves in this general part of the province, a potential that is not really been realized yet. It’s cool then to see pictures of a newly discovered cave with some superficial archaeological findings near Tumbler Ridge, as pictured above and outlined in this good article by Mark Hume in the Globe and Mail.