Some news just puts the fear of Cod into you. For example, there’s an interesting study from earlier this year which suggests that rising sea levels in the Alaskan middle Holocene (in the study: roughly 7,000 to 4,000 years ago) released methyl mercury compounds into the nearshore environment (Open Source paper by Maribeth Murray et al., 2015). These then accumulated in fish, specifically Pacific Cod, Gadus macrocephalus, and presumably also in other species which predate upon these cod, such as humans. It’s an interesting preliminary study, but before you think, “Oh My Gadus, Ancient Alaskans were Mad Hatters running amok with mercury-induced neuropathy”, there are some important details to consider.

The study in question is based on archaeological remains at the XMK-064 site on the south side of the Alaskan Peninsula, in Amalik Bay within Katmai National Park.

The cod remains samples showed mercury concentrations up to 50% greater than the modern levels, which themselves are elevated by anthropogenic (human-origin) mercury released since the industrial revolution. The concentrations are around 700% of the later Holocene bone samples, which might be taken as a sort of non-polluted local baseline. 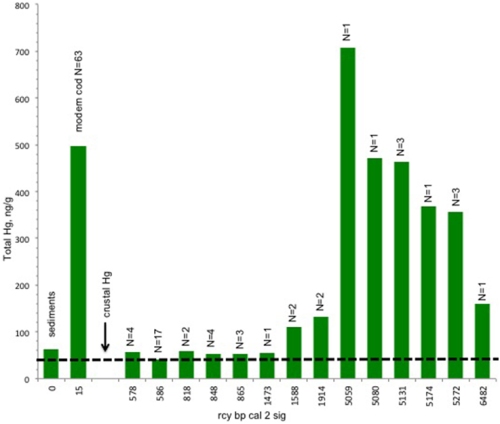 So, a few thoughts about this study:

1. The sample size is pretty small. For each level, usually only one or two bones were analyzed for their mercury content. While the pattern appears robust enough, I guess I am just barely enough of a social science type to want to beef up the number of samples tested.

2. As noted in this commentary on the article, the comparison of the archaeological bone is to modern cod muscle mercury levels, and the relationship between the muscle and the bone concentrations is unknown.  This is a little mystifying to me, given that modern cod bones are not exactly unobtainable!  Maybe they used previously-gathered data for their comparative sample (likely), maybe there was budgetary constraint (even more likely).  All the same, if for some reason bone concentrations are higher than in muscle, then the apparent danger to people consuming the fish goes down or perhaps their results are even not significant.

3. However, there is some suggestive evidence that the opposite is true.  A single modern sea otter sample, for example, had

” a mercury level of 9 parts per billion in its bones, but the level was more than six times as high — 58 parts per billion — in the animal’s muscle tissue, Duffy said. If the ancient cod muscle similarly held six times the level of mercury found in bones, he said, eating that fish would have posed health risks for the people inhabiting the area 4,000 to 5,000 years ago, especially the youngest inhabitants, whose brains were just developing and were thus most vulnerable to contaminants, [Duffy] said.”

So, it seems possible the bone mercury concentrations are seriously underestimating the muscle mercury content of the living fish.  According to this table, you shouldn’t eat fish with concentrations of mercury greater than 0.09 parts per million more than six times a month, a concentration the archaeological bone samples approach.  This document says greater than 1 part per million in fish makes it actionable as a poisonous substance.  The bone concentrations in the table above peak at about 0.7 parts per million (math credit: Sharkie), and if indeed the muscle concentration is higher than the bone then these may have been fairly dangerous fish to gorge on.   Add this to the likelihood that the inhabitants were eating not only cod, but a variety of high level predators like seals, and the human mercury loading might have been quite high indeed. Anyway, I’m not a real doctor, so it’s frustrating that it is hard to put together the derived archaeological values to the modern safe consumption guidelines. 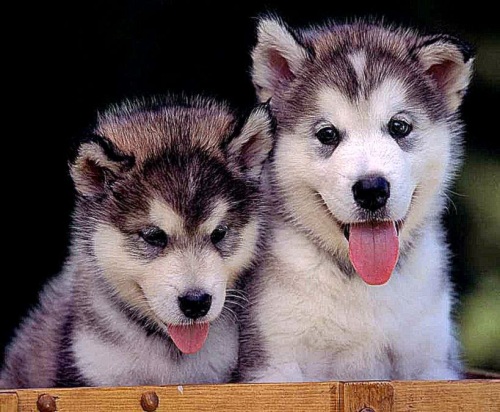 4. Of course, a more direct way to access this would be to test actual human remains.  However, not only is this fraught with ethical concerns needing community collaboration and consensus, but there may not be many, or even any, such remains to test.  In a similar situation on the Central Coast of BC, Aubrey Cannon argued convincingly that dog remains were a useful proxy for human remains for understanding bone chemistry signatures of diet.  I wonder if coastal Alaskan dog remains might not be more abundant and accessible as a follow up to this study and be close to a direct measurement of concentrations in ancient humans.

Anyway, archaeologists are sometimes contorting themselves to fit into current research priorities like climate change.  This is a different take on the matter which I had never heard of and might be a serious concern for the future if the already increased amount of mercury in the nearshore waters is further enriched by sea level rise.  Does this apply to seaweed?  To shellfish? Does the mercury rising mean rising mercury? I really don’t know.  Certainly in Haida Gwaii we see very rapid sea level rise in the terminal Pleistocene and at Kilgii Gwaay the diet is rich in species similar to Pacific cod. The first step is, I think, to replicate this study more robustly and perhaps across a larger region and really nail down the size of the effect. If it’s real, then it’s a cool piece of Historical Ecology!  I wouldn’t mind hearing from more knowledgeable people if this is a real thing, or for other examples of measuring mercury in local archaeological remains. There’s no shortage of samples for the fishboners to get to work on!