Today is the 30th anniversary of the cataclysmic eruption of Mount St. Helens, an explosion so large that it could be heard as far north as southern Vancouver Island.  The mountain has erupted many times in the past – one of which was captured by the well known painter Paul Kane (above) – and will continue to erupt indefinitely.  Many of these eruptions and its fickle nature loom large in oral histories.  The ash from prior eruptions forms important geological marker horizons all over the Northwest.  Judging by this map, there are no known obsidian sources directly associated with Mount St Helens.  These are the more obvious kinds of connections to archaeology and they shouldn’t be discounted. Another approach exemplifies a kind of morbidly creative lateral thinking.

The 1980 blast killed thousands of deer and elk, and their bodies were subjected to the same enormous forces which flattened the forest, being hurled large distances and smashed against bedrock, volcanic ejecta and downed trees.  Too bad for these cervids, but a nice natural laboratory for the study of bone breakage patterns.  Dr. R. Lee Lyman, now at University of Missouri, took advantage of some of the natural death assemblages and recovered a number of recently dead cervid skeletons.  He found a number of the bones, which unequivocally had not been butchered by humans or killed by predators in this apocalyptic context, showed modifications that were highly suggestive of human agency.  Indeed, he suggests some of these pseudo-tools might well past muster by even quite discriminating archaeologists were they to be found in an archaeological site.

In the above picture, Lyman makes a case that the pointed part of the fractured bone shows wear and rounding that would be interpreted as use-wear by many archaeologists, but which he atrributes to contact with abrasive volcanic ash. 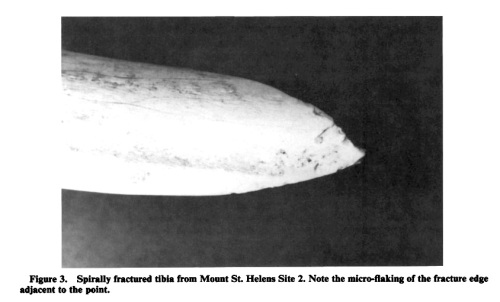 In the above and below, there is clear and quite distinctly localized patterns of micro-flaking along the presumptive working edge of the tool.  Lyman attributes these to the extraordinary forces applied to the cervid carcasses, including torsion and twisting of broken bones and their impact against each other.  And certainly these are convincing pseudo-tools.

But what is the lesson learned?  In the big picture, it shows that extraordinary events can create  the sorts of forces and results also created by a determined human with a stone chopping tool.  When it is a sudden natural force, like a volcano, then these pseudo-tools may be subjected to a limited range of effects and therefore even more fully emulate expedient bone tools.  Compare the result from St. Helens to, say, an elk carcass being washed down a river.  In the latter, the carcass is exposed to a variety of natural forces that will probably dull many margins of broken bone, create chaotic fracture patterns, and eventually be exposed to organic degradations via bacteria, fish, rodents, etc.

The point is, the Mount St. Helens case study is an out of the ordinary event.  If you are an archaeologist fooled by a bone pseudo-tool, and you missed the volcanic eruption, then there may be other reasons not to take you seriously.  And to his credit, Lyman presents the material as an interesting cautionary tale, not as some kind of unwarranted argument that other bone tools from archaeological contexts should be doubted.  He offers a useful model of bone reduction and some good observations but these decontextualized pseudo-tools are an easy target – if they were found in an archaeological site with archaeological context and with no evidence of extraordinary geological forces, then yes, they probably would be classed as artifacts and probably they would be.  But if you want to find out more then luckily you can download a copy of his 1984 paper here, and a related 1989 publication (with very poor image qualities) here. 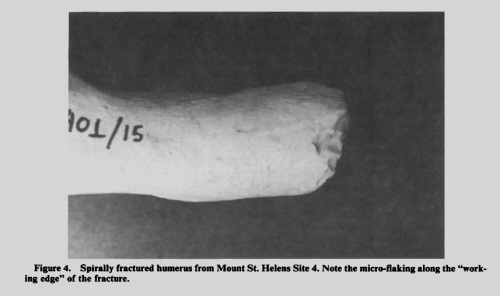