Fieldwork Picture of the Day 5 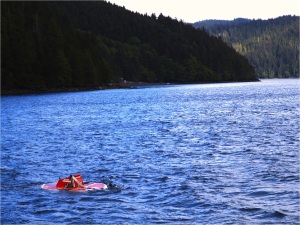 A few years back I fulfilled a lifetime ambition by going down in a submersible.  This shows the Nuytten craft “Aquarius” on the surface in front of the warden’s cabin on SW Huxley Island in Gwaii Haanas (map).  We tried diving onto the ancient lake that now lies drowned at 33 metres below sea level,  more or less in front of the cabin.  This lake would have been last exposed to air about 10,000 14C years ago.  We started at about 110 metres down and then worked our way up a palaeo-river channel towards the lake, but unfortunately got off course and ended up a lot closer to the beach than we had anticipated.  These things are flown by a pilot, but the basic navigation is by transponders on the bow and stern of the mother ship which allow triangulation from a known point.  Apparently, not foolproof!  The lake we were diving onto shows huge potential for an archaeological site.  We are thinking there may have been a base camp for bear hunting at Gaadu Din 1 or 2, which are less than a kilometre away.   Possibly, too, there was a sockeye salmon fishing camp here, since the nearby caves contain numerous salmon bones from the late Pleistocene.  Anyway, it was pretty cool to go down in the submersible!