These Outer Shores: A special edition of BC Studies

The regional journal BC Studies has a new special issue out focused on local archaeology. Entitled These Outer Shores, the edition is available for a reasonable price (20$) and two of the articles plus the forward are already open access, with the rest to follow in a couple of years.  The publisher’s blurb gives a good sense of the edition:

Guest Edited by Alan D. McMillan and Iain McKechnie, These Outer Shores presents recent archaeological research along the outer coast, from southeast Alaska to the entrance to Juan de Fuca Strait. The authors challenge the long-held perception of the western edge of British Columbia as “peripheral” or “remote,” removed from major cultural developments emanating from more interior locations. Instead, recent fieldwork and analyses document a lengthy and persistent occupation of the outer shores over the past 13,000 years. Using a variety of modern approaches and techniques, the authors examine such topics as changing sea levels, human settlement history, fish and shellfish harvesting, whaling, and the integration of Indigenous oral history with archaeology.

The table of contents can be viewed here or here (JPG), but for ease, here it is, below. I’m including a snippet of introduction or conclusion that captures the focus of the paper. I’ve also stuck in an exemplary illustration from each chapter above the entry.  My day job’s library seems to only have terrible access to BC Studies via “ProQuest” which has no illustrations or PDFs and a much-mangled text.  They will take you to the OJS site, but without access to the locked PDFs.  Maybe I am doing something wrong.  As I’ve posted before, the older archives of BC Studies  (>3 years?) are all open access and can be downloaded as PDFs. Anyway, the following gives a good idea of the journal’s content.

The authors in this volume present recent archaeological research in the important but relatively underexplored outer coast region, showcasing the continuous human presence over the longue durée, or the broad scale of human history that occurs beyond the history of individual events (Braudel 1970). Such a perspective accommodates the extended periods of time represented in the deep archaeological deposits of the outer coast, while also recognizing the short-term everyday activities repeated over many generations that formed the material record investigated archaeo- logically. Although in many areas of the outer coast the earliest traces of human presence have been lost to the encroaching sea, other locations reveal evidence of human settlement that spans about thirteen thousand years (Fedje et al. 2011; McLaren et al., this vol.). Persistent long-term ties between people and specific places are demonstrated in the archaeological record, in oral traditions, in systems of ownership rights to land and resources, and in deep-seated cultural practices stemming from regular and repeated use of the land and sea over generations. Rather than the popular view of much of the outer coast as a “wilderness,” archaeological research, oral traditions, and Indigenous knowledge clearly situate these outer coast places as familiar “homelands” that sustained substantial populations of diverse human cultures over millennia.

Traditionally, the land otter was the shaman’s most potent spirit helper, or ye’ik. This animal has captured the imagination of many people, has been fodder for contemporary novelists and bloggers, and one can easily find popularized and corrupted versions of ancient Tlingit stories on the internet and in bookstores.

This article is not primarily about Kóoshdaa kaa, however; instead, it addresses the behaviour of Lontra canadensis, as decipherable from remains at Kit’n’Kaboodle (49-DIX-46), an archaeological site on the west side of Dali Island in southeast Alaska. As I describe, this place was inhabited both by people and land otters at various times in the ancient and recent past, spanning more than fifty-five hundred years. Relying predominantly on zooarchaeological data, I present evidence for the human occupation of the site at various times during the spring and/or summer seasons over thousands of years. Based on field observations, wildlife studies, and the analysis of dense lenses of tiny fish bones, the site was occasionally occupied by land otters. Herein I describe how faunal remains deposited by people were distinguished from those deposited by land otters. I propose that what is revealed at Kit’n’Kaboodle helps explain why Tlingit have had such a special, long-term cultural relationship with land otters.

Because southeast Alaska and British Columbia were covered by ice of different thicknesses in different areas (e.g., Carrara, Ager, and Baichtal 2007), and because tectonic conditions and events vary from place to place, relative sea level histories are also very localized (Shugar et al. 2014).\n More broadly, it provides a long-term snapshot of the lifeways of offshore island occupation of the Northwest Coast. In subsequent millennia, a variety of village layouts appeared on the islands, the largest of which have differentially sized houses and can be characterized at the most general level by either straight linear house rows or curved house rows, which may be indicative of different cultural groups occupying the islands.

The detailed synthesis and analysis of late Holocene zooarchaeological data from Haida Gwaii presented here reveals a pre-European contact pattern of small, dispersed settlements that focused on a variable array of local subsistence pursuits deriving from their particular historical and ecological circumstances. In the late pre-contact and early European contact periods these data further highlight a shift to larger, centralized, amalgamated villages drawing resources from wider, regional catchment areas facilitated by increased seasonal mobility. Significantly, these suggestions are not new but, rather, fit very well within a range of previous archaeological, oral historical, and ethnographic sources that clearly highlight aspects of these demographic, cultural, and economic shifts within the late Holocene in Haida Gwaii (e.g., Acheson 1985,1998, 2005; Swanton 1905).

My search for bilhaa has taken me out into my ancestral home, over the waterways, and ashore at villages and places Gitxaala have always known and valued. As we took up the shovels and trowels of archaeology, as we appropriated their ways as our own, we knew that we could now say yet again what we have always known to be true: we have always harvested bilhaa and we intend to continue doing so well into our future.

This article presents the results of chronological assessments of deep and highly stratified archaeological sites on the central coast of British Columbia. Four of the archaeological sites have evidence of repeated occupation spanning at least ten thousand years. An additional five sites have evidence of at least five thousand years of residential use. A stable sea level in the region allowed people to gain access to the same shoreline over long periods of time, resulting in the accumulation of deep archaeological sites. Cultural factors contributing to the longterm accumulation of materials are based on the interrelated system of prerogatives that includes origin stories, property title, and inheritance. 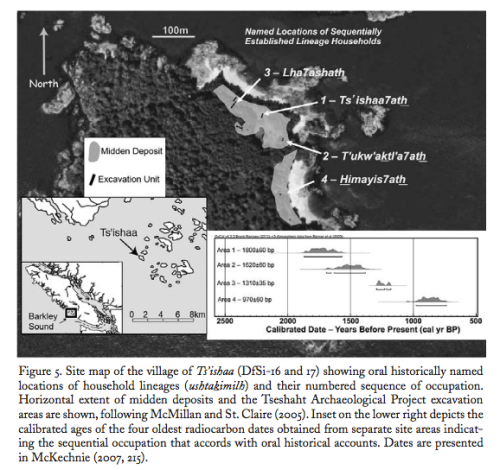 In this article, I have examined an area of the outer coast, using detailed oral historical accounts and archaeological information that document multi-faceted community-level changes during the contact era and over the past three thousand years. The oral historical information and archaeological data indicate that these two distinct ways of considering human history reveal parallel and comparable sequences of settlement, including village establishment, expansion, and the construction of a fortress to ensure continued control over specific territory. Combined, these oral narratives and physical records offer a stronger basis for evaluating change, continuity, and settlement variability within a local group territory on the outer Northwest Coast (e.g., Moss 2012).

MUCH HAS BEEN WRITTEN about whaling among the closely related Nuu-chah-nulth and Makah peoples of western Vancouver Island and the tip of the Olympic Peninsula, along with the pervasive role this practice had in the economic and social systems in these communities. Most sources, however, treat whaling as a single uniform activity, rarely distinguishing between prey species, despite their differing patterns of migration, behaviour, and accessibility. Nor is whaling generally seen in terms of the individual actions and decisions of whaling chiefs, rather than as a more general cultural pattern of community economic activities. This article presents the results of recent studies that identify whale species through bones recovered from archaeological sites in Barkley Sound, western Vancouver Island. It also uses archaeological and ethnographic data to interpret the evidence associated with whaling in terms of the actions of ancient whaling chiefs.

THIS ARTICLE ADDRESSES RECENT research on the northwestern Olympic Peninsula of Washington State that focuses upon archaeological sites that appear to be associated with one or more older sea level stands. The sites are located in forest settings between approximately seven and fourteen metres above the top of the modern intertidal zone. Several are located along the flanks of coastal river valleys that would have been bays when the local sea levels were higher. We present background information on the context of these sites, summarize the work that has been undertaken at them, and place the results of our research within the environmental and cultural histories of this region. [note: see blog post here] 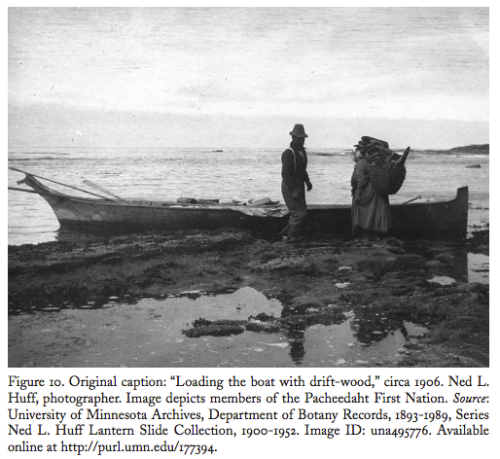 So, without having read all of this, there’s obviously a lot to like.  The last special issue of BC Studies on archaeology was back in 1993, so this is welcome and timely, and at 20$, a real bargain..  There’s been a little more archaeology in the journal outside of the special issues in the last few years, but the journal is still dominated by documentary history at the expense of the 13,000 years of human history preceding settlers.  In this, perhaps it resembles the community museums I was being snarky about in a previous case, or, maybe archaeologists just don’t see it as a viable publication outlet.

Marine vs. Terrestrial Mammal Use in SW BC Archaeological Sites. Source: McMillan and McKechnie 2015.

16 responses to “These Outer Shores: A special edition of BC Studies”