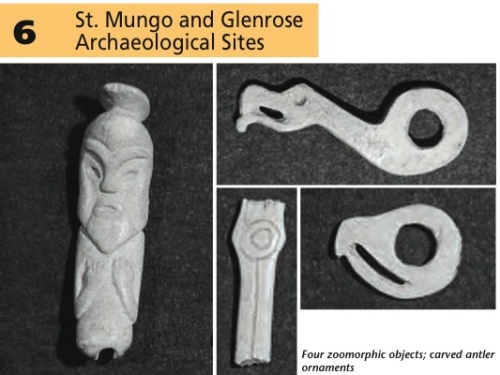 The Glenrose Cannery site, which lies on the Fraser River near the Alex Fraser bridge, is one of the mose significant archaeological sites in BC.  The human figure on the left, above, dates to the ‘St Mungo” phase, putting it at between 3500 and 5000 years old.  It might be the oldest known representation of a human being in British Columbia – well, to my knowledge, it is.  Yet, you can already see elements of the formline art appearing – look at the eyebrows, for example.  More importantly, look at the beard.  Look at the hair, pulled into a bun.  This is a portrait of an individual.  The artifact, which is probably a small handle for a chisel, is a masterpiece of Canadian art. The site in which it was found shows continuous occupation from the present to about 9,000 years ago and spans up to eight metres of vertical deposits.

So it is disturbing to think that Glenrose might be further affected by development, in this case, road building associated with the “Gateway Project”, a transportation infrastructure megathrust to get stuff to and from the Ports of Vancouver faster. There is a short article in The Province yesterday (archive) in which UBC Professor Emeritus RG Matson, one of the key figures in BC Archaeology, visits the site.   We can’t preserve everything from the past, clearly, or all cultures at all times would have been glued to the footprints of their forebears.  But a site of such demonstrated significance as Glenrose should probably be completely off limits.

Up front, I’ll say I haven’t been following this issue closely and I don’t know that much about the Gateway Plan.The government press release notes the South Fraser Perimeter Road is planned to impact the site, which they describe in the most neutral language humanly possible:

Glenrose Cannery Site – This site has high scientific and cultural significance due to the presence of waterlogged deposits, materials suitable for chronometric dating, diagnostic artifacts, and a wide variety and quantity of artifact types. Investigations suggest that the SFPR alignment is immediately adjacent to, or on, the southern limit of intact archaeological deposits in this area. To avoid or mitigate potential impacts to archaeological resources, an Archaeological Mitigation / Monitoring Plan will be developed and implemented as the design and construction methodology of the SFPR are finalized.

Huh.  Stonehenge, the Pyramids and Chichen Itza also have “diagnostic artifacts, materials suitable for chronometric dating, and a wide variety and quantity of artifact types”. Is that really what makes national treasures?  Fixing the language with which we talk about archaeology is a topic for another day, though.

I have no doubt that in a narrow sense proper legal procedures are being followed here and that whatever destruction happens will be permitted under the letter of the Heritage Conservation Act,   I know the companion site of St. Mungo has also been heavily impacted but development, although some bridge footings of the Alex Fraser bridge were indeed moved to help protect it.  I’m not calling out any particular agency, company, branch, person, whatever.  I’m just calling for a wider perspective here on a site that should be a national historic treasure and yet is in the firing line. I guess in that sense yeah, I am calling out Canadians. Let’s get it together.  Anyway, maybe those who know more about this case can chip in here.  Remember, you can leave a comment under the nickname of your choice, and your email and identity are not shown, and indeed, your email does not have to even be real.  I want to know what’s going on at Glenrose.  If it’s not much, that’s good news.

Location of Glenrose Cannery and St Mungo sites relative to 5000 year old shoreline (heavy line). All the land to the left of the heavy line did not exist 5,000 years ago. Source: Matson and Coupland 1995 via googlebooks.

A couple of other older newspaper articles here and here. (By the way, I am increasingly linking to  JPGs of newspaper articles, because newspapers just cannot be trusted to keep their links working reliably.  Click on the JPG in your browser to enlarge it to what I hope is a comfortable reading resolution).

Update, October 7th. Professor RG Matson kindly sent me the photos below of excavation at Glenrose Cannery.  I had had a caption earlier on the Tom Loy picture above which could easily have been read as shoring wasn’t used at Glenrose.  The pictures below show extensive use of shoring, probably in excess of the normal standard of the day. As RG notes, and agreed I may post here:

In most of the units, shoring was not used, as one slide from 1973 [#1, below] shows. However, in the deepest units, shoring was definitely used as the other two slides (both 1973) show.  The two slides with shoring show (I think) the excavation of Unit 55, the 1 x 2m “Baulk” between units 1 and 5, the two deepest units (5+m) at the site.  They also show why very few useful slides (and B/W) photos exist.  With the shoring and lack of light it was tough to get decent pictures, so not much effort was spent in that area.  Most of the existing photos are of relatively small areas “Features”, and taken overhead.

The units in 1973, were covered with heavy plywood and had locks on them when not being excavated, as these holes were dangerous

Anyway, back in the day not everything at any site was done by WCB rules, but its obvious there was attention to this important safety issue at Glenrose under RG’s direction.  Other than that, it is great to see these new pictures of such an important and historic dig, so thanks to RG for scanning them in and sharing them.  They really emphasize the depth and substance of the deposits at Glenrose and visually should cue us to what an exceptional site this is. 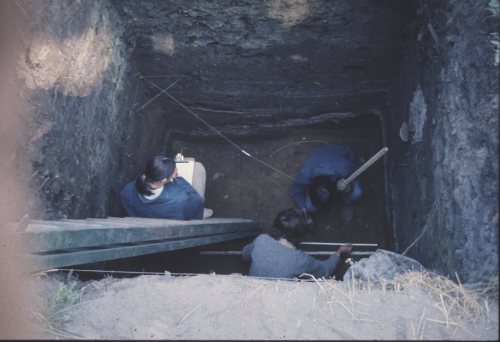 2. Glenrose excavations, including use of shoring, 1973. Courtesy of RG Matson

169 responses to “Glenrose Cannery Under Threat?”